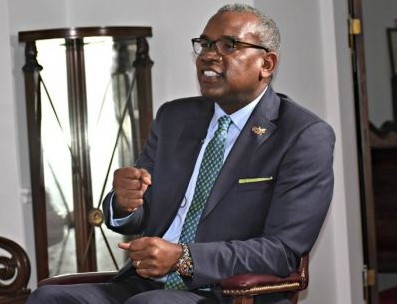 CHARLOTTE AMALIE — The Legislature of the Virgin Islands voted to approve the debt consolidation package of $1.1 billion in matching fund bonds over some objections from the Senate on Friday.

On a vote of eight to five, the Senate voted to support the so-called “securitization” bill that Governor Albert Bryan, Jr. sent down to lawmakers in the second week of August.

“Their vote allows the Government of the Virgin Islands to explore the market and realize savings that can fund critical government needs, and that can help reduce the unfunded pension liability of the Government Employees Retirement System,” Bryan said. “The refinancing of our existing bond debt in this unprecedented low-interest-rate environment is too great an opportunity not to explore.

Bryan requested the legislation August 11 that became Bill No. 33-0363. It seeks to reduce the territory’s debt service payment by giving the Virgin Islands access to the bond market for the first time in 11 years.

The bill does this by creating a separate financial entity, or Special Purpose Vehicle (SPV), that would take full control of the coveted rum cover-over monies that the territory collects from the U.S. Treasury.

The Virgin Islands government has more than $3.35 billion in net pension liabilities through the Government Employees Retirement System (GERS).

But St. Croix Senator Kurt Vialet, chairman of the Senate Finance Committee, lambasted the governor’s team for not revealing that the $255 million in estimated savings includes $130 million from the territory’s own debt service reserve fund. The fund is supposed to be used as an emergency set-aside to pay off government debt in the event of an actual catastrophic disaster.

The bonds are supported by taxes on the sale of Virgin Islands-produced rum in the United States.

“The USVI, by approving the use of the new structure that subordinates the territory’s claim to matching fund revenues, will be giving up a fair amount of its negotiating power and legal leverage to bondholders in exchange for a modest amount of near-term savings,” said Municipal Market Analytics Managing Director Lisa Washburn. “The anticipated savings will buy some time but it doesn’t come close to solving the financial challenges of the territory.”

MMA, in its August 17 Outlook publication, said, the transaction, if executed, “likely puts off a necessary debt restructuring by a few years and probably makes it more costly. As municipal market participants have learned over the past several years, bondholders are smart to assume that they will be subordinated to the health, safety, and welfare of a government’s citizens if funds run short.”

Bryan told The Bond Buyer on Saturday that the securitization of the bonds through the use of a special purpose vehicle was an “incremental step in the right direction,” but that the U.S. Virgin Islands still had a great deal of work to do to resolve the territory’s fiscal challenges.

The governor said that he hopes to complete the transaction before the end of this month.

The Special Session slated for August 18 was cancelled after St. Croix Senator Kenneth Gittens announced that he had contracted COVID-19.

Gittens and Senator Steven Payne, Sr. were excused from the Special Session on Friday.