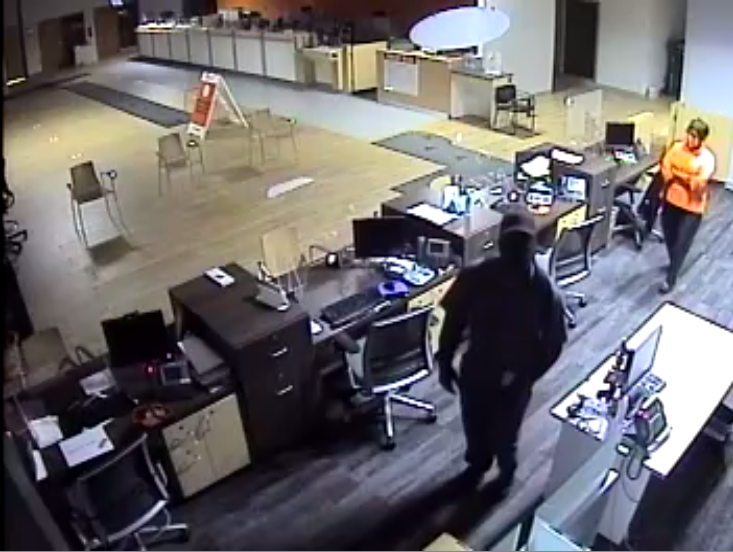 CHRISTIANSTED — The Virgin Islands Police Department, on its Twitter feed, confirmed that an attempted bank robbery took place at Oriental Bank in Estate Diamond this morning.

Police went as far as Annaly Bay in Frederiksted in searching for the suspect, whose image was circulated by the VIPD on Twitter this afternoon.

The suspect is seen wearing overalls and gloves, such as a workman or a refinery worker might wear in images released by the VIPD to Twitter this afternoon.

Oriental Bank has two posted Ranger American of Puerto Rico security guards at its Sunny Isle Shopping Center-area location. The security guard at the door is usually armed, the one stationed in the parking lot is usually not.

“LIKE REALLY????????,” Avis Ronan of London wrote on Facebook today. “So why the security outside WOULD NOT BE ARMED? Makes no sense at all. Especially in this season.So they think bank robbers gonna would come to a bank to play games? Makes no sense though. Why would a company place a person’s life in a precarious situation like that.Y’all be playing with other people life though.”

Oriental Bank is located just west of the Sunny Isle Shopping Center, one of the major attractions on St. Croix — and a hotbed of uncontrolled violent criminal activity on the Big Island.

The V.I. Free Press politely requested comment for this news article from the VIPD at 8:44 a.m.

Toby Derima, the VIPD spokesman, responded at 6:13 p.m. with this:

“ST. CROIX, USVI – On September 18 at about 7:04 a.m., the 911 Emergency Call Center received calls for police assistance at Oriental Bank in Estate Diamond.

Investigation revealed a bank employee was abducted by a masked gunman wearing coveralls and gloves. In an attempt to commit robbery, the gunman transported the victim to the bank where she worked. The suspect directed the employee to give him money from the bank vault, however he was unsuccessful in obtaining the money.

Upon the arrival of another bank employee around 7 a.m., the employee became concerned and called the police. While officers were in the area of the bank, the kidnapped employee emerged from the bank and notified officers of the situation. Subsequently, it was learned that the suspect fled the area in the bank employee’s vehicle. Officers engaged in a pursuit of the vehicle. The suspect evaded police capture in the Annaly Bay area, and is still at large.

The VIPD and the Federal Bureau of Investigation (FBI) are investigating this case.

A reward for information leading to the arrest of the suspect is being offered. If you have any information that can assist police in the suspect’s capture, please call 911, the Crime Tip Line at (340) 778-4950, or Crime Stoppers USVI at 1 (800) 222-8477. If you saw something, please say something.”