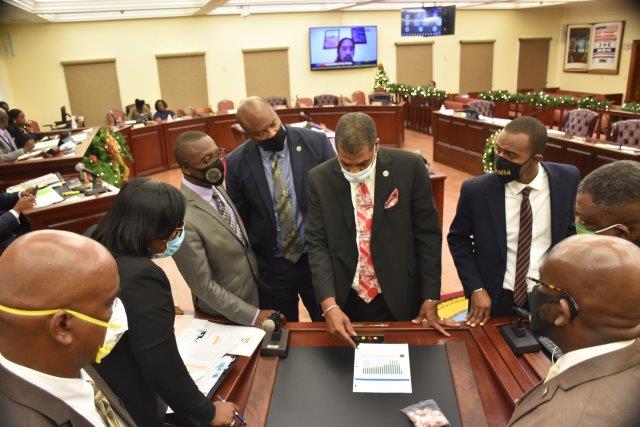 CHARLOTTE AMALIE — Members of the 33rd Legislature convened in Special Session at the governor’s request on Tuesday and voted down Bill No. 33-0446- that would have created a “Matching Fund Securitization Corporation.”

“Once again, we are vetting the bill regarding the Matching Fund Securitization Corporation. There were three meetings previously held on August 25th, August 27th, and September 17th of this year as it pertains to Bill No. 33-0446. We are doing our due diligence to make a final determination,” Senate President Novelle Francis said.

Following the 33rd Legislature’s failure to pass Governor Albert Bryan’s proposal, which they had previously approved in September, Bryan issued the following statement about his plan to refinance the government’s debt for a more favorable interest rate and immediate savings of $85 million to be used to shore up the Government Employees’ Retirement System and other government projects:

“While it is unfortunate that the Legislature passed up this opportunity, this proposal was just one of several initiatives we are working on to address the GERS insolvency and fund other critical government projects,” Bryan said. “Of these initiatives, this proposal would have provided an immediate infusion of revenue to help stabilize the retirement system while we continue pushing forward other initiatives.

“In the meantime, my administration will redouble its efforts for the other revenue-generating measures we have proposed, such as passing the Cannabis Act, and the Administration also is working tirelessly to come up with other solutions, which include restructuring the benefits package for new and existing retirees,” Bryan said.

Bryan also noted that Puerto Rico on Wednesday passed a similar measure for some of its bonds to be offered to the bond market for refinancing.

“The primary difference between the two debt financing proposals is that Puerto Rico will be refinancing unrated bonds, and the USVI is offering investment grade, which puts us in the position for a more favorable interest rate than the 3.75 percent they’re aiming for,” he said.

“Although some members of the community still express doubts about the debt refinancing proposal for the USVI, this type of debt refinancing transaction is a safe and trusted way that governments at all levels increasingly are realizing immediate savings by lowering their payments toward their debt obligations,” Bryan said.

“Although the Legislature at this time does not have the desire to front-load the savings to infuse revenue into the GERS, it still makes sense to refinance the debt at these current low interest rates to achieve these savings.”

He said the government “continues to be committed to transparency, stabilizing the economy, restoring trust in government and ensuring the disaster recovery is completed as quickly as possible.”