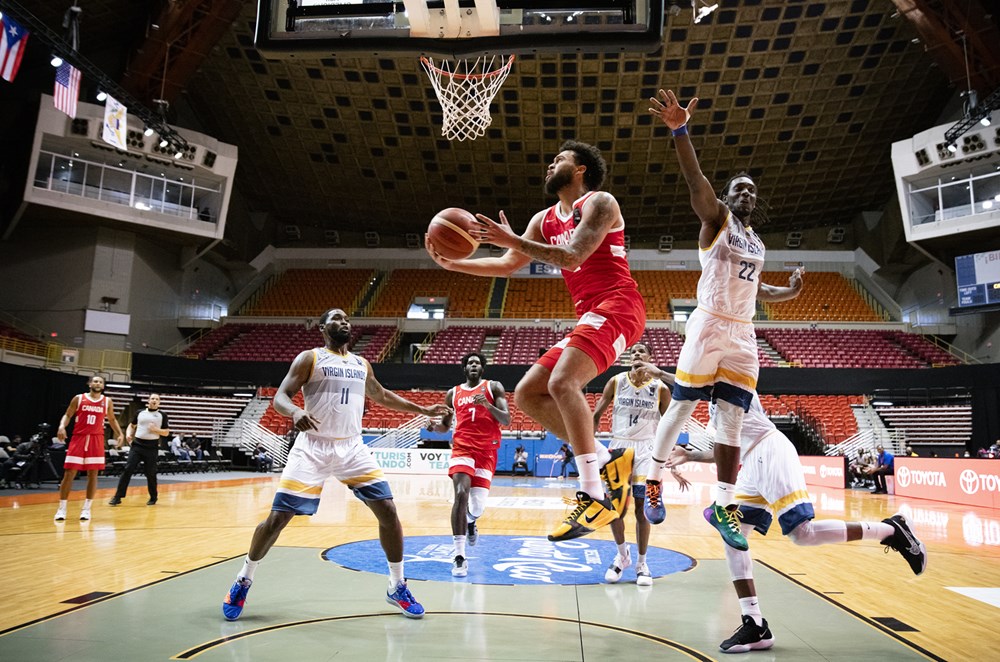 SAN JUAN — Kaza Kajami-Keane and Anthony Bennett combined for 46 points in Canada’s second win over the U.S. Virgin Islands in a 95-90 win, during Group C action this afternoon at Coliseo Roberto Celemente.

A rematch of Wednesday’s game saw both teams keeping it close as Canada outscored their opponent by one basket in the first quarter, 20-18, but pulled away in the second quarter to go into the second half with a 43-35 lead.

The usual suspects for both teams performed well during the first half, with Anthony Bennett and Kaza Kajami-Keane combining for 24 of Canada’s 43 points, while Walter Hodge and Ivan Aska scored 21 of35 for the US Virgin Islands.

Turnovers and fouls would put US Virgin Islands behind after 20 minutes, as they turned the ball over 4 more times than their opponent, while fouling 12 times to Canada’s 8.

Defensively Aska was a standout, leading both teams with 8 rebounds in the half, but Canada stayed closely behind with Bennett and Thomas Scrubb combining for 11 boards.

Bennett and Hodge would lead the charge for their respective teams going into the final 20 minutes as well, with Bennett scoring back-to-back deep 3-pointers to help Canada find a 15-point lead early in the 3rd quarter.

Aaron Best and Kaza Kajami-Keane joined Bennett to be the triple threat Canada needed to sustain a 5+ point lead all quarter, but Trivante Bloodman and Deon Edwin stepped up alongside Aska and Hodge offensively for US Virgin Islands to try and keep up with the fast-paced Canadian game.

It was Hodge who would lead all scorers to attempt keep his country’s AmeriCup hopes alive, netting 27 points through the game’s first 30 minutes, double that of the next highest scorer for US Virgin Islands.

Hodge went on to score 17 more points in the final minutes of the game, ending the match with 44, almost half of the team’s total, but with only two other scorers in double digits, US Virgin Islands couldn’t match Canada’s offensive efficiency.

Capitalizing on turnovers and points from the bench gave Canada the edge to win their second matchup with US Virgin Islands, and helped them move to 3-1 in Group C. Both teams have now concluded their play in the third window of the AmeriCup qualifiers.