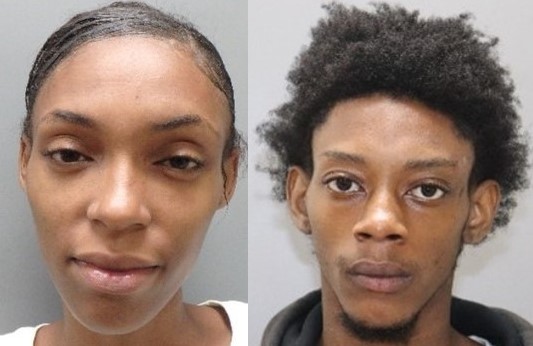 CHARLOTTE AMALIE — A woman and her alleged accomplice remain in official custody today after police said they ambushed a man in a housing project after luring him out of his apartment by damaging his vehicle in plain view in broad daylight.

Katina Evans. 23, of Paul M. Pearson Gardens was arrested at 6:30 p.m. Saturday and charged with third-degree assault, damage to a vehicle, and disturbance of the peace by fighting, the Virgin Islands Police Department said.

Raquan Penn, 19, of Oswald Harris Court, was arrested at 8:05 p.m. Sunday and charged with third-degree assault, aiding & abetting, simple assault & battery, and disturbance of the peace by fighting, according to the VIPD.

The injured man told police that about 6 p.m. Friday, he was informed that Evans was tampering with his vehicle at the Oswald Harris Court housing community on St. Thomas.

When he arrived to check on the car, Penn struck him, starting a fight, the victim told police. Evans then “jumped on his back,” and “tasered him,” according to police records, so he punched her to get her off of him.

As Penn continued fighting, the injured man told police Evans struck the vehicle with a piece of wood and “kicked in the windshield.” He also said Evans and another woman at the scene were each armed with kitchen knives, and he knocked the knife out of Evans’ hand, suffering a cut to his finger doing so. Witnesses at the scene confirmed to police that Evans “had a kitchen knife with a silver blade,” which she used to try to stab the complainant.

Evans and Penn fled on foot when patrol officers arrived, according to the affidavit. The complainant said his girlfriend has had a history of fights with Evans, and he called police on Saturday and reported Evans had returned to the area of Building 33.

Responding officers found Evans and arrested her. Evans “confessed to tasing” the injured man and damaging his windshield, and she “also indicated that this is an ongoing situation,” according to a sworn police affidavit.

Police also arrested and interviewed Penn, who said the man who brought the police complaint “struck him with a pickaxe” when he went to defend Evans, and said another woman at the scene had “a machete close to Ms. Evans and a white dog.”

At their advice of rights hearing on Monday, Territorial Public Defender Paula Norkaitis questioned why the complainant hadn’t also been charged with causing injuries to Evans and Penn, and the arresting officer told Magistrate Judge Carolyn Hermon-Percell that an investigation is ongoing.

Evans has a pending domestic violence assault case, but no previous arrests. The judge ordered each suspect released on an unsecured $25,000 bond, and ordered them to stay away from all victims and witnesses in the case.

“Everyone involved needs anger management,” Hermon-Percell said. “If something happens, just walk away.”