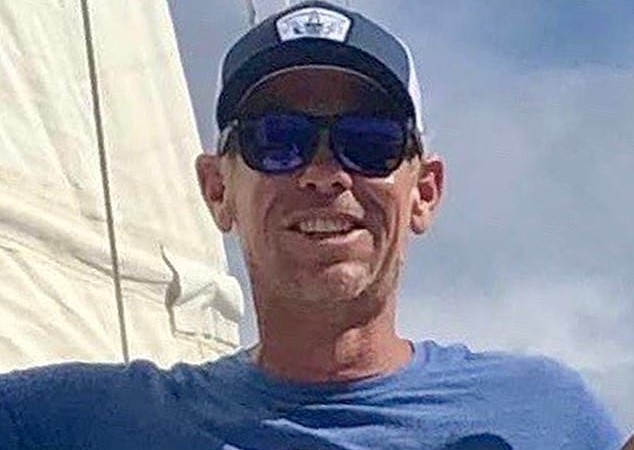 CRUZ BAY — There is a photograph of the man who owns the catamaran that a 41-year-old British woman went missing from in St. John six days ago.

Ryan Bane, 44, told police his girlfriend Sarm Joan Lillian Heslop might have fallen overboard from their catamaran after he woke up at “around 2 a.m.” on Monday and “realized that she was not on board.”

Bane, who owns and captains the 47-foot Siren Song, said he was awakened by the sound of the boat’s anchor alarm, which sounds when a vessel has moved too far from its mooring, before discovering his girlfriend was missing.

The U.S. Coast Guard told local media it was alerted to Heslop’s disappearance at 11.46 a.m. — a nearly 10-hour gap in time between when Bane said he noticed Heslop missing and when he first reported it to authorities.

The news comes as police searching for the missing woman from Southampton continue to scour land and water off of Frank Bay in St. John, where the yacht was moored.

A friend of Bane’s said he seems remorseful and sad since Heslop’s disappearance.

“He is beside himself with grief and worry,” they said. “He is heartbroken. I know from what he’s said that Ryan and Sarm were very much in love.”

The friend added that Bane was awakened at “around 2 a.m.” by the sound of his yacht’s anchor alarm.

“Ryan said his anchor alarm went off,” they added. “He woke and found Sarm wasn’t in bed. He got up and went around the boat but there was no sign of her.”

Bane grew up in Michigan and was sailing on the Great Lakes by the age of 10. He is a 50-ton merchant mariner with a bachelor of arts degree from Michigan State University.

“He had tried his hand at various business ventures, but the Siren Song of the Virgin Islands kept calling his name,” a brochure states. “Raised in a suburb of Detroit, Capt. Ryan was cruising on his first sailboat by age 10.”

Following Heslop’s disappearance, the 41-year-old’s friends have been left “devastated” and have urged the authorities to make the search for her “a critical priority.”

“Her friends here at home are devastated and just need her disappearance to be made a critical priority,” a friend in the UK said.

The friend said they were told that Heslop’s phone, passport and belongings had all been left behind on the yacht.

“She would not just disappear, leaving no trace,” they said.

“We would like to thank all the local community for their support in searching for Sarm both on water and land,” another friend added. “They have been so amazing but we urge them not to give up until she is found or we have more information.”

Heslop is described as a slim 41-year-old woman with a southern English accent and a tattoo on her left shoulder.

She was last seen on board on Sunday before her boyfriend called the Coast Guard’s San Juan station reporting that “his girlfriend may have fallen” from the yacht.

The Leopard 4700 model catamaran was moored off the coast of St John, which has a population of 4,170 residents.

“Heslop was last seen on March 7 aboard the vessel Siren Song, that was moored off the coast of St. John,” Virgin Islands police spokesman Toby Derima said.

Divers from various law enforcement agencies have searched hundreds of square feet of water for Heslop.

Volunteers from the Virgin Islands have also scoured the area around Frank Bay during daylight hours, police said.

What authorities have not focused on is that Bane sailed with Heslop 6.5 miles to French Bay in St. Thomas for dinner Sunday night — it was the last time she would ever be seen alive in public.

VIPD spokesman said in a press conference Friday that someone spotted Heslop in Red Hook on St. Thomas Thursday, but when officers arrived she was no longer there.

A six-night charter on Bane’s yacht costs $16,900 at New Year’s, according to a brochure for the Siren Song.

Meanwhile, the comments on this article on social media came fast and furious.

“Chupes ok and you could seem remorseful and still kill her,” Laviscount Tasia said. “Sick of people trying to speak on someone’s character and you ain’t with them 24 – 7.”

“I am a bit confused here as having done quite a bit of sailing myself,” Bruce Henderson said. “I would have thought the boyfriend would have raised a possible ‘man over board’ alert when he first noticed she was gone especially bearing in mind that the anchor alarm went off and it was 2am, if he had there would have been assistance straight away from within the sailing community near by as people falling off boats at night can happen with a trip on a sail line etc. Also when they do check the boat it may be an idea to check the boat transponder as I am sure as a charter boat it will have such a safety device on board. Still in a state of shock about all this as I am sure we all are but we need answers to obvious questions.”

“So, the police did not search the vessel which she apparently lived on for clues, hmmm?” Sandra Aubain-LaPlace said. “The boyfriend did not give permission for them to board, no search warrant was issued and he took 10 hours before reporting her possibly missing right….”

“Did anyone call the Law of the Sea the Coast guard investigation unit,” Lee Questel said from St. Thomas. “They can board the vessel at will regardless he says no or not.”

“How the hell do you not have reasonable suspicion?” Chris Nostaw said. “Any judge would issue a search warrant for this. Insane.”

“The anchor alarm has absolutely nothing to do with where she is,” Melisa Kirby said. “‘Anchor alarm’ is a red herring meant to imply that they suddenly drifted and she fell overboard. Not so easy on a cat and not at all believable.”

“All Investigations should thoroughly go (to) the boyfriend first and secondly and of course (a) third time,” Cali Corerro Mocal said.

“This is an utter bullshit article!!! Flora Pickard said. “How can you be so inconsiderately Stupid?? What is wrong with you? None of you knew him — none of you knew either of them… Ryan is the most gentle soul and would never ever hurt a fly!! fuck you VI Free Press!”

The Siren Song’s hailing port is “Lake Orion,” which is a medium-sized inland lake in Michigan. It is located in the Village of Lake Orion there.