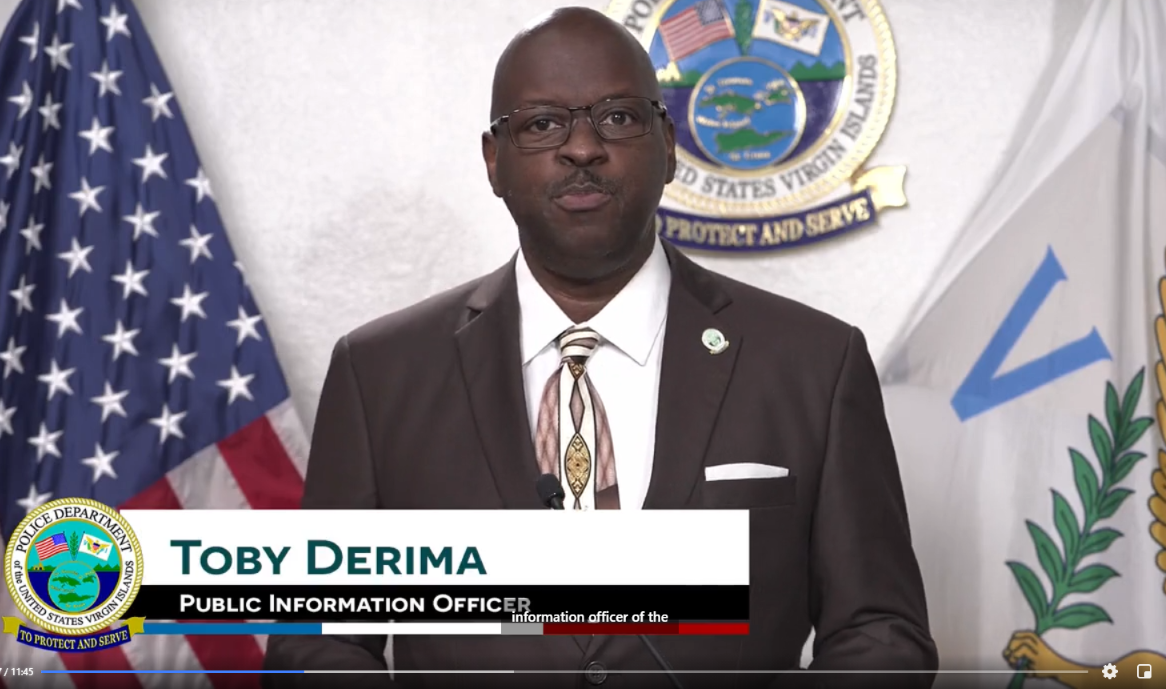 CHARLOTTE AMALIE — When the investigation into Sarm Heslop‘s disappearance was just five days old, the Virgin Islands Police Department held a press conference in St. Croix touching on that issue and others.

“The search on St. John, for this woman there — is that ongoing?” Carlson asked.

“Yes, ma’am it is,” Santos replied and then turned the podium over to VIPD spokesman Toby Derima.

“What we could tell you about the investigation into the disappearance of Sarm Heslop,” Derima said on March 12. “The detectives and police officers on the island of St. John have been handing out flyers and making inspections in the Red Hook area of St. Thomas.

“And a citizen actually called 911 yesterday and said that they saw Ms. Heslop in the area in Red Hook. However, when officers traveled to the area to make an inspection, they did not find her. Just know that … everyone needs to know that we are still actively searching for Ms. Heslop. We have regular checks of Cruz Bay (St. John) and Red Hook (St. Thomas) to see if we see her.”

Red Hook is where people in Charlotte Amalie St. Thomas begin the 20-minute ferry ride to Cruz Bay St. John. If police believe that Heslop is still alive and now living in St. Thomas — it would be reason enough not to search Ryan Bane’s catamaran for clues now. Heslop had been renting space on Bane’s yacht prior to her disappearance.

And if police believe Sarm is alive and well — it would also explain why they are monitoring the ferry terminals that connect St. John to St. Thomas.

Derima was asked these questions and more in an email. Telephone calls to the police spokesman also went unreturned today, but he did speak to the issue of police not searching Ryan Bane’s boat with The Telegraph.

“We have not been able to search the boat yet and will do this in due course. It is something that will be done eventually,” he said, adding that police are “keeping their options open” to see whether Heslop could have “fled” to St Thomas.

Police Commissioner Trevor A. Velinor has defended the police investigation so far, saying that officials “do have some concerns regarding the details thus far,” in relation to Sarm’s disappearance, according to the Daily Mail.

The question then becomes: if Sarm Heslop is alive and well — why would she leave her cell phone and identification documents behind on Bane’s boat? She would need them to travel between St. Thomas and St. John.

Although U.S. citizens do not need a passport to travel between St. Thomas and St. John, you do need an official government-issued ID such as a driver’s license. British citizens, like Heslop, would need to produce a passport and clear U.S. Customs to take the ferry.

Friends in London say that they were in daily contact with Heslop up until the night of March 7. Heslop’s best friend Andrew Baldwin said that her belongings and identification documents were turned over to police on Tuesday.

“Sorry, Siren Song is currently not available for charter,” a message on the website states. “Please use the search form to find other available yachts or contact us.”

To view the VIPD press conference from March 12, 2021, please click on the link below: