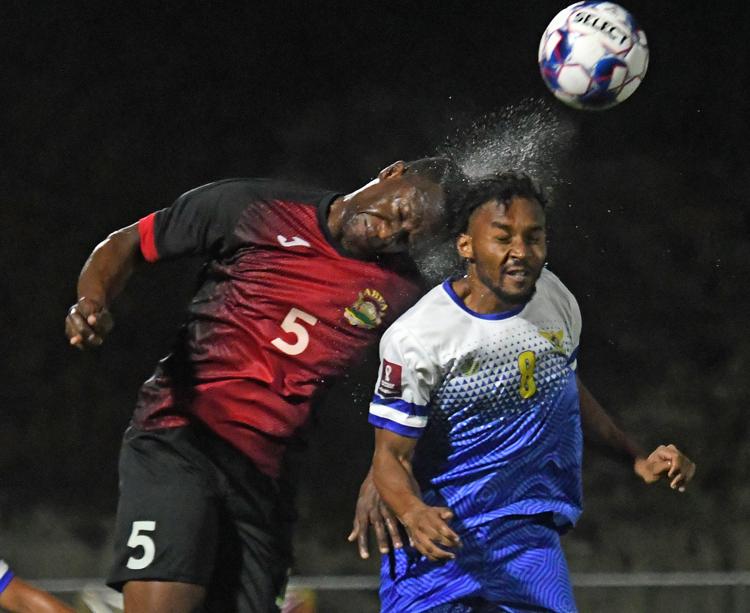 KINGSHILL — For the first 20 minutes of the first half, the U.S. Virgin Islands’ senior men’s national soccer team looked to be in tune with opponent Antigua and Barbuda.

Then the Antiguans began playing to a different tune, which led to a 3-0 victory over the USVI National Team in their FIFA World Cup Qatar 2022 Qualifiers match Saturday night at the Bethlehem Soccer Complex.

Antigua and Barbuda (1-0-1 in Group A) scored all of its goals in a 16-minute span in the first half to take a commanding lead, then held off several scoring attempts by the USVI (0-1-0 in Group A) in the second half to take its first group-play win.

The USVI National Team has just three days to recover, with its second group-play game against Grenada (0-1-0) Tuesday in St. George, Grenada.

“We definitely felt we had the rhythm of the game,” said USVI assistant coach Jorge Zavala. “We were pressing on them, and we had the better opportunities, especially getting in behind them. But when that first goal happened, it’s just about bouncing back and trying to find a way to be able to get back some rhythm.

“But the boys kept fighting, which was tremendous — that was the most important thing for us, to be able to just keep working on the things we’ve been working on the past three months.”

Forward Peter Byers put Antigua and Barbuda ahead with his close-in goal in the match’s 26th minute, and midfielder Quinton Griffith added a pair of insurance goals later in the first half — the first on a penalty kick in the 34th minute, the second in the 42nd minute.

“The main point was to come out of this match with those three points,” for winning the match, Griffith said. “We had a good match against Monserrat, but unfortunately we came out of that with a [2-2 draw on Wednesday, March 24].

“[The U.S. Virgin Islands] tried; they got a few passes forward. But we kept the drive going. We made a few passes that went through. We made some mistakes, but we fought back.”

The penalty kick appeared to be especially troublesome for the U.S. Virgin Islands — goalkeeper Lionel Brown had come out to challenge Griffith’s breakaway, and was whistled for a penalty after colliding with Griffith in the goal box.

Then, in the second half, USVI forward Jimson St. Louis was brought down in the box by Antigua and Barbuda goalkeeper Molvin James on a virtually identical play — but no penalty was called.

“Everybody’s human, and we’re not playing with VAR ,” Zavala said. “But that changed the momentum of the game. … It was just little moments in the game that can make the difference in changing that momentum.”

The U.S. Virgin Islands made several substitutions throughout the second half, with several scoring opportunities.

Outside of the non-foul on St. Louis, the closest the USVI came to breaking the shutout came when James tipped a long shot over the crossbar at the midway point of the half.

“We weren’t necessarily attacking more — we just stopped giving the ball away,” Zavala said. “That was huge for us. We probably gave up 60 percent of our passes in the first half, and we cleaned that up very well in the second half, creating opportunities.

“We went into the locker room believing, ‘If they can do it, why can’t we?’ It’s just mental. We had another 45 minutes. … It was just hard luck for us, not scoring those goals when we got behind.”

The British Virgin Islands dropped its opening group-play match in the FIFA World Cup Qatar Qualifiers on Saturday, getting blanked by Guatemala 3-0 in Willemstad, Curacao.

Darwin Lom and Moises Hernandez scored goals in the first half to stake Guatemala to a 2-0 lead, and substitute Robin Betancourth added an insurance goal late in the second half.

Guatemala is now 2-0-0 to lead Group C, while the British Virgin Islands is now 0-1-0 entering Monday’s match against St. Vincent and the Grenadines (0-1-0) in Willemstad.