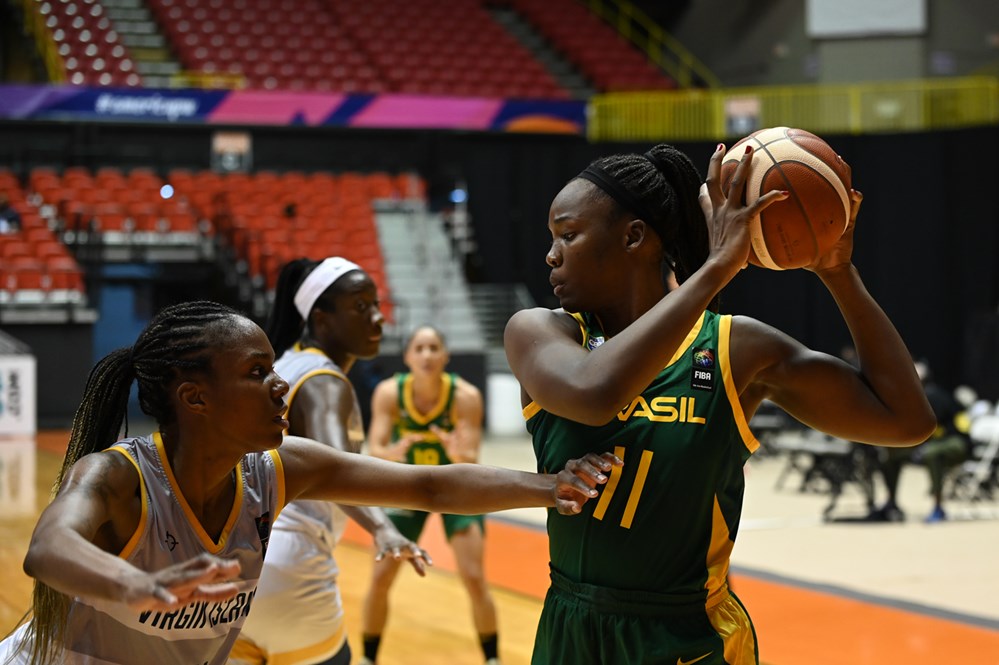 The 15th-ranked Brazilian team handed the USVI a 77-56 loss in a group-play game at the Coliseo Roberto Clemente after the hometown favorite got off to a slow start.

Natalie Day scored a team-high 17 points, Imani Tate added 14 points and nearly had a triple-double, and Anisha George had 13 points for the 49th-ranked U.S. Virgin Islands, which fell to 0-3 in the Group A standings.

That makes today’s group-play finale against 85th-ranked El Salvador — also 0-3 after losing to No. 4 Canada 98-41 earlier Monday — so vital if the USVI wants to move into the AmeriCup’s elimination rounds.

The math is simple — the winner gets to play again on Thursday, with the likely opponent being the United States, the world’s top-ranked team; the loser packs its bags and heads home.

“Definitely, in terms of wanting to advance in the tournament — 100%,” USVI head coach Tajama Abraham-Ngongba said. “I still want the girls to go into the game relaxed. I don’t want them to put too much pressure on themselves, and not take shots when they should or second-guess their decisions.

“But we definitely know we have to take care of business [today]. It is, as you say, a must-win game, and we’ve got to build on some of the things we did [Monday]. I thought we took some steps in the right direction with some things, other things we’ve got to do better at.”

Kamilla Cardoso had a double-double in leading Brazil (which finished group play at 3-1) with 17 points and 11 rebounds. Taina Paixao and Thayna Silva added 10 points each.

The first quarter. The U.S. Virgin Islands continued to struggle with its early shooting, going down 25-10 by the end of the period.

“After halftime, we dug our heels in,” Day said. “We were going to punch back. As teammates, we held each other accountable, we kept our chins high, we made sure that everyone felt like we were together in this one fight. That’s the major point, something we know that we’ll keep for [today’s game] as well.”

Imani Tate, U.S. Virgin Islands: The 5-foot-8 guard, who plays for Laboratorios Ynsadiet Leganes of Spain’s Liga Femenina 2, nearly had a triple-double in Monday’s game. In addition to her tournament-best scoring game, she also had nine rebounds and eight assists, as well as four steals.

Kamilla Cardoso, Brazil: The 6-foot-8 center, who recently transferred from Syracuse to national college power South Carolina, led a dominating inside game by the Brazilians, with all of her shots coming within three feet of the basket. She also had two of the team’s six blocked shots.

• The USVI’s size disadvantage was evident again in Monday’s game, with Brazil — which had five players 6 foot or taller — finishing with a 47-35 edge in rebounding. But the Brazilians’ real advantage came from its bench, which outscored the USVI’s reserves 36-2.

The U.S. Virgin Islands faces El Salvador in their final group-play game at 12:10 p.m. today at the Roberto Clemente Coliseum in San Juan.