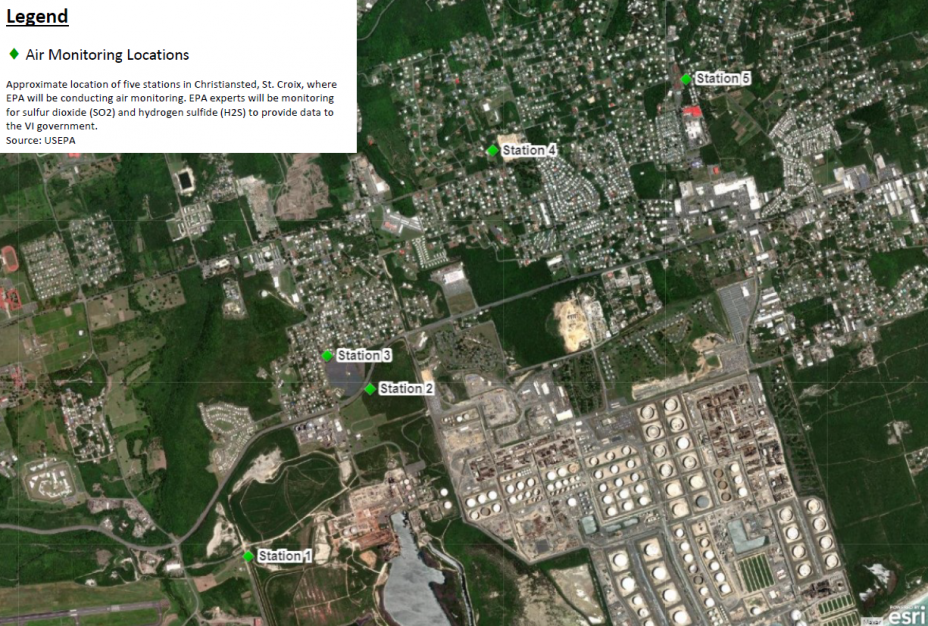 The EPA ordered an emergency halt to refinery operations in May after a series of incidents polluted the air and water supply of the nearby communities such as Machuchal and Enfield Green.

Limetree must develop plan within 15 days to install nine hydrogen sulfide and nine sulfur dioxide monitors on St. Croix, according to the EPA.

The EPA said five of the sulfur dioxide monitors are already required by its pre-existing permit, though Limetree has previously said that requirement does not apply.

Mugdan added that the agency recognizes the economic importance of this business on St. Croix.

“EPA stands ready to assist Limetree in understanding its compliance obligations,” he said.

Limetree Bay does not comment to the U.S. Virgin Islands media as part of its corporate policy.

The EPA monitors the measure of two of the most dangerous chemicals commonly found in refineries, sulfur dioxide and hydrogen sulfide, both proven to cause health problems ranging from respiratory distress to loss of consciousness if breathed for extended periods or at high enough levels.

Already the monitors have detected several air quality exceedances above target levels set by the agency in concert with its federal partner in health, the Agency for Toxic Substances and Disease Registry.

For every exceedance, the EPA immediately notifies the agency and the Virgin Islands government so it can keep its residents informed.

Saturday, May 15
EPA got a reading on one of the monitors showing a level above the threshold value set for hydrogen sulfide (H2S). The level of the exceedance corresponds to the Tier 1 Action Level, meaning that greater than 50 percent of the population may be expected to experience odors. The level was measured at a monitor station west of the facility and occurred between 10:45 p.m. to 11:30 p.m.

Tuesday, May 18 into May 19
An EPA monitor west of the refinery got 10-minute average readings exceeding the threshold for hydrogen sulfide (H2S) at a Tier 2 Action Level, indicating residents should be advised to shelter in place, especially schools, elderly care facilities and health centers to reduce exposure. The elevated level was detected starting around 10 p.m. and was at its highest around 1:49 a.m. on May 19.

Wednesday, May 19
EPA got readings on a monitor west of the facility exceeding the threshold value for hydrogen sulfide (H2S) at Tier 1 and Tier 2 Action Levels. The reading taken was taken around 9 p.m. and the highest level was recorded around 6 a.m. on May 20.

Thursday, May 20
EPA got readings on a monitor northwest of the refinery showing the level of hydrogen sulfide exceeded the value set for the Tier 1 Action Level. The measurement was taken around 5 a.m.

Successive accidents at Limetree brought an emergency EPA response team to St Croix on April 30 to investigate serious problems with the startup of the refinery after an eight-year hiatus. Almost immediately, the agency issued Limetree a Clean Air Act violation notice for failing to revive five community sulfur dioxide monitors that had been operated by former owner Hovensa.

The EPA’s monitors are now installed in the same five locations, eventually to be replaced by permanent ones that Limetree has agreed to provide.

“The EPA monitors are not the same as the federal reference monitors that will ultimately be provided,” agency spokesman Elias Rodriguez said. “Limetree Bay has committed to again operating those monitors for sulfur dioxide.”

While Limetree has not publicly given a timetable for installing them, its SO2 monitors will be operated based on an EPA-approved plan, according to the agency. The type of monitor, known as a Federal Reference and Equivalent Monitor, is considered the gold standard of air pollution monitoring systems, assuring accurate data to determine if the National Ambient Air Quality Standards for SO2 are being met, the agency said.

The EPA has set up an air monitoring page that further explains how the monitors work, what the measurements mean and is regularly updating what they detect.

More information is online at the EPA’s Limetree Bay website