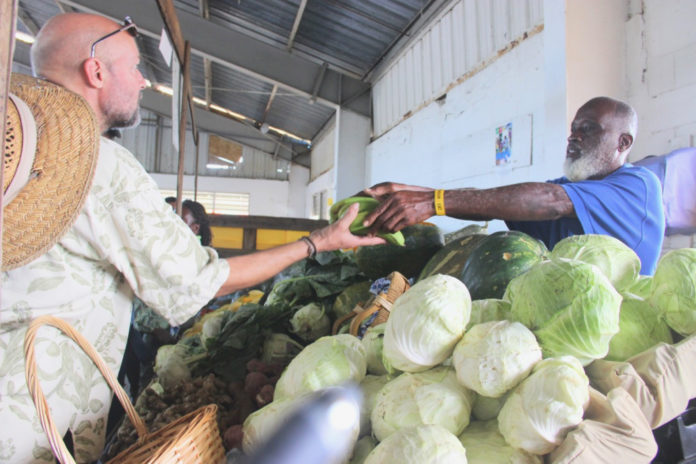 Political meandering needs to be called out for what it is. Today I listened to the Finance Committee’s budget hearing for the Department of Agriculture. For a moment I was pleased with the strides that Commissioner Positive Nelson reported to have made during the last year at the Department of Agriculture. I am sure we all agree that more could have been done, but the accomplishments should not go unnoticed. Sadly, Senator Kurt Vialet took the opportunity to impugn the reputation of the St. Croix Farmers in Action, Inc. (FIA), a local nonprofit organization with the Internal Revenue Service and the Division of Corporations and Trademarks. This grassroots organization has been in existence for over 20 years and has managed to maintain good standing with both entities.

From 1998 to 2005, FIA along with the students at the St. Croix Education Complex, of which Kurt Vialet was the principal, and some community volunteers, spent weekends working to manually clear the site of brush, debris, junk machinery parts and equipment that were allowed to accumulate about the property by its prior leaseholders. It took assertive lobbying by FIA to win the confidence of Legislators to removed the property from the auspices of the Virgin Islands National Guard and designate 18A Estate Bethlehem to the FIA by legislation for the restoration and conservation of historical buildings and documentation of the site’s historical and cultural relevance. Subsequently, a lease was processed through Property and Procurement’s contracting process, resulting in the grant of a grant a 50-year lease with an option in FIA to renew for another 50 years at $1.00 per year. The lease recites a requirement for agricultural development, and historical, cultural and ecological preservation.

FIA has honored the tenets of its leasehold responsibilities to the property. Over the next 15 years, it worked to introduce a project that would benefit the community agriculturally, historically, culturally and ecologically. The project is known as “The Estate Bethlehem Sugar Factory Restoration Project”. FIA was awarded a $1 Million Dollar grant which was invested completely back into the property, under the supervision of the Public Finance Authority and the Department of Agriculture. Today the property boasts of a Cultural Arts Building and Community Center and an unfinished multipurpose building, secured fencing, two wells and more.

After years of speaking with potential business partners and investors, finally Fresh Ministries LLC (NOT Freshwater Ministries) a nonprofit entity known internationally for contributing to the development of disadvantaged communities, partnered with Farmers in Action to assist in the realization of the Farmers in Action’s five point plan for an Agri-tourism Interactive Museum and Ecological Lodging Concept, unique to
this Caribbean Region, that showcases our culture, our history, our people and our pride. The mission for the Estate Bethlehem Sugar Factory Restoration Project remains consistent with the legislation that awarded FIA this historically rich property.

Unlike many local and government leaders and private businesses (including EDA entities), Fresh Ministries understood the greater vision and agreed to partner with this grassroots organization to assist with making its vision for the site and the island a reality. There is no sublease. Fresh Ministries LLC does not pay $1.00 or any money to FIA or the Government. There is only a business agreement. The agreement has expanded to include the Episcopal Diocese of the Virgin Islands to provide fresh produce to the needy in our community, utilizing the Bethlehem site as one venue for distribution. There is no exchange of money.

What FIA, Fresh Ministries and the Episcopal Diocese are doing should be congratulated and supported rather than torn down for political mileage, pitting farmers against farmers. There was no under the table deals, as some leaders tried to do in an effort to turn the site into a garbage packaging facility years ago. FIA’s Board showed that they could not be bought.

Sejah Farms has expressed its support for FIA as has many other farmers, and FIA remains an advocate and supporter for all farmers. The Bethlehem Restoration Project is a medium used to highlight agriculture and its importance to our community and will provide educational and training opportunities for entrepreneurship. Since its inception, FIA has held cultural events for our schools and community; historical and ecological tours; summer camps, workshops and seminars on topics ranging from the Red Boa Snake to agricultural preparedness to the political status of our island, all of which Farmers in Action believes shape our lives. A few years ago, FIA introduced the internationally known and successful “Crucian Coconut Festival” which will be held again this year on December 5, 2021. Its growing economic benefit cannot and should not be ignored or underscored.

Senator Vialet’s political rantings, followed by a factually incorrect Facebook posting attempted to tarnish the reputation of the Board and volunteers of FIA and discredit the work of the organization. It is a sad statement when our political leaders intentionally misinform the public when the facts are not hidden. No Board member has been paid for time or reimbursed for their money invested in the Bethlehem Restoration Project or any other event of the organization. They do it for the love of our island and its culture. They also do it because they believed in agriculture when few in power did and they continued to fight for its development until other well-known farmer advocate organizations decided to join the fight

FIA does not stand alone and never will. It has partnered with the University of the Virgin Islands Cooperative Extension Service and Agriculture Experiment Station to bring agriculture workshops and experimental project, and with the Department of Agriculture and UVI to bring the first Agriculture Forum and the first Hurricane Preparedness for Farmers Forum at the University. As a result of the Agriculture Forum, UVI implemented FIA’s recommendation to hold livestock and crop farmer workshops from which some of our current successful farms took root. FIA also worked with the University on an environmental project that focused on the Bethlehem Watershed and its impact on dengue fever and jointly hosted a forum on the political status of the Virgin Islands. The University continues to work with FIA on
the Crucian Coconut Festival.

FIA worked with St. Croix Environmental on tree planting projects on the Queen Mary Highway. FIA stood along farmers to fight to save farmland from a government parking lot (in the area of Smithen Farm) and the UVI tech park (by Torres and Durant’s livestock farms). FIA unsuccessfully fought for government support to save Island Dairies. FIA worked with other senators to introduce an agriculture policy. And there is more. The fact is that FIA has been all about the community, and while it did not pay huge sums in rent for 18A Bethlehem, its contribution to the community
exceeds the $25.00 an acre it may have paid, and FIA will continue to selflessly invest in its community.

Senator Vialet, you supported property tax, gross receipt and excise tax exemptions to an entity on south shore for more than 20 years after 50 years of prior concessions. A private for-profit business that initially squatted on farmland has received a long-term lease at nominal value while some reputable farmers like Sejah Farms continue to fight for a lease. Farmers in Action’s $1 Million grant from the government went into the government’s property. How have the concessions to the south shore entity benefited the community? Why pick on a grassroots entity working hard to earn respect and make a difference? Why are you creating divisiveness? Why spread misinformation when the facts are readily available? You have a responsibility to relay the truth. Our culture is not a game; our history should not be skewed; our health is not for sale; agriculture development is a must. On which side do you stand?