CHARLOTTE AMALIE — A St. Thomas real estate broker who allegedly stole millions of dollars from her RE/MAX clients still has not gone to trial — about a year after she was last scheduled to do so.

The criminal case against former real estate agent Rosemary Sauter-Frett might never go to trial — as more than a decade has already passed since she fled the territory to escape a warrant seeking her arrest.

Sauter-Frett, 68, is accused of embezzling potentially millions of dollars from clients in the early 2000s.

In 2010, Sauter-Frett fled the territory after authorities issued an arrest warrant for her. Court documents indicate she spent at least part of her time as a fugitive in Kentucky, before moving to California, where she eventually was arrested in February 2014.

While on the run, she managed to pay off a federal tax lien.

Her trial has been delayed several times since her arrest.

At least 11 years have now passed since the original arrest warrant and Frett’s flight from justice without a jury having been selected in the case.

Her previous criminal history includes a 1983 conviction in California at age 29 — when she was known as Rosemary Chernowski — for stealing $25,000 from Lewis W. Douglas Development Company.

In 1996, she obtained a real estate license in the territory by omitting the conviction from her application.

The conviction was vacated in 2000, but the California Superior Court order vacating the judgment mandated that Sauter-Frett make clear on licensures, questionnaires and applications for public office that she is a felon.

Just weeks before she went missing in 2010, her name also surfaced in the trial of two former police officers and a drug dealer who were accused of extorting a suspected drug dealer, Richard Motta.

During the trial, attorneys implied that Sauter-Frett had worked with and tried to hire Motta to kill her husband, Jacob Frett.

The officers, Enrique Saldana and George Greene Jr., had seized Motta’s rented vehicle on December 4, 2008, which was found to contain paperwork from Sauter-Frett.

Saldana found out later about the possible hit that was in the works at Sauter-Frett’s request, according to Darren John-Baptiste, who represented Saldana during the trial.

Saldana is currently in prison for the murder of his wife, Jeanette Magras, in an unrelated case.

Assistant U.S. Attorney Kim Lindquist also implied during the trial that Sauter-Frett had paid Motta to kill her husband.

Whether Sauter-Frett actually tried to have her husband killed was never answered in the trial and she never faced charges in connection with the claim.

Following her arrest in 2014, Sauter-Frett’s husband helped her post bond and agreed to serve as her third-party custodian when she was released from jail after seven months.

Frett died last year around this time, according to an obituary published in a local newspaper.

“Mrs. Frett appears to still be on house arrest as she has continued to satisfy her financial requirements for her house arrest conditions,” V.I. Superior Court Clerk Tamara Charles said last year.

St. Vincent Man Who Body Slammed Teen Daughter And Had Sex With Her Arrested

Tropical Storm Watches Issued For USVI And Puerto Rico ... Because Of 'Fred' 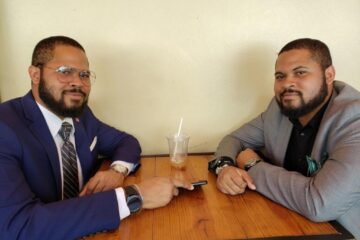