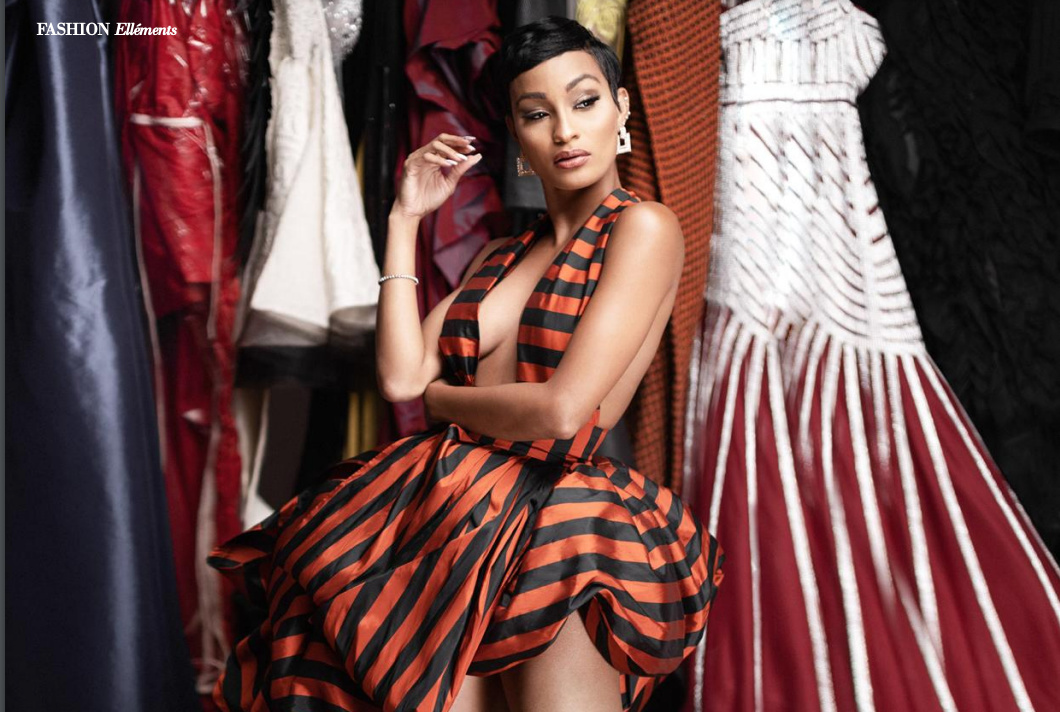 CHRISTIANSTED — Janeisha John isn’t satisfied unless she is juggling multiple projects while simultaneously looking out for what comes next.

The St. Croix native recently took time for a photo shoot with Elléments Magazine, and landed the cover for its December holiday issue, as reported in the V.I. Daily News.

A former Miss Universe U.S. Virgin Islands and Miss America USVI, John represented the territory at the 2008 Miss America pageant and the 2010 Miss Universe competition. She produced and worked as a television host for various networks including local stations WTJX and WCVI stations, before relocating to Los Angeles to pursue a career in television, film and modeling. She is currently a host and producer for streaming service Zeus Network.

John credits her parents, Josephat John and Liz Torres, with encouraging her and her sisters to follow their passions. They owned and operated Centerline Bakery and Deli for more than 30 years, and the girls grew up meeting all types of people there.

“Everybody on the island, at some point in their life, would pass through that bakery, so we met so many people, so many different personalities. It definitely helped with not being shy, being really outspoken and engaged with what was going on on the island. It encouraged us to be at the forefront,” said John.

At the age of 3 or 4, John expressed an interest in dance and was enrolled in the Music in Motion Dance Academy. That interest spiraled into Taekwondo classes, playing alto saxophone in a band and a general love of performing.

She started her television career on Channel 12’s Graffiti Street, a local teen-talk program. Her father had the first music studio on the island, Mountain Sound and Vision, and she was often there to learn about that process as well.

It was in fourth grade that John won her first pageant. A few years later, she competed for the title of Miss St. Croix and came in second. Her next foray into the pageant world was to compete for Miss UVI, where she was again first runner up.

“It was a most humbling experience for me — being so competitive. I had a great performance on stage and thought I had it in the bag,” she said. “In a moment, I realized that it wasn’t just about performing, because I was a great performer. I just wasn’t really sure of the young lady I was, so I had to take a step back and really just analyze who am I.”

Less than a month later, John was given the opportunity to run for Miss America U.S. Virgin Islands. This time, she won the pageant, which in turn, launched her into the Miss America pageant.

In 2010, the year she ran for Miss America, John decided that she wanted to officially become a model, learning what she could on Google, investing in photo shoots and seizing every opportunity she could find that she thought could be a platform for her.

“You’ve got to do the research and keep your focus,” she said. “You have to decide that you’re going to get through as many steps as you need to and do whatever is necessary. I was never afraid to get up and go or afraid of rejection, either, and I got a lot of rejections throughout the process, but it all helped me to figure out my look and understand how I’m supposed to carry myself in the industry and how the business of it all works.”

The hard work has paid off.

John has hosted for the former MTV-affiliated and Caribbean network TEMPO. She is the host of the annual Miss St. Croix pageant. She has also done Red Carpet correspondence for Project Runway’s Mychael Knight New York Fashion Week show and for the Children Uniting Nations Oscar Viewing Party in Beverly Hills, Calif.

In Los Angeles, John ran into someone from a black men’s magazine that she had met in New York, who connected her with Atlanta-based fashion photographer Aim Crawford. While visiting her sister in Atlanta, John gave him a call and he set up a shoot for an eight-page spread in Elléments Magazine, a national publication.

Crawford enlisted designer Nicci Houston to curate the pieces to be worn. Two days before the magazine hit the stands in December, John was told she would also be featured on the cover. John’s boyfriend Lemuel Plummer, president and CEO of the black-owned Zeus Network, a subscription streaming service, landed his own cover for Alpha Magazine for the same month.

“Since we met, my life as changed tremendously and we’ve built a lot together. We are blessed every day to wake up and get to do what we love to do. We’re still growing, and 2022 will be a big year for us,” she said. “Where we are is great, but there are so many things we want to accomplish. With the success of the network, the opportunities are just endless. I’m really excited to see where we’re going to go with the network. Zeus is doing great things.”

Not one to rest on her laurels — or rest at all — 2022 will also be a year that John wants to get some more personal entrepreneurial projects off the ground.