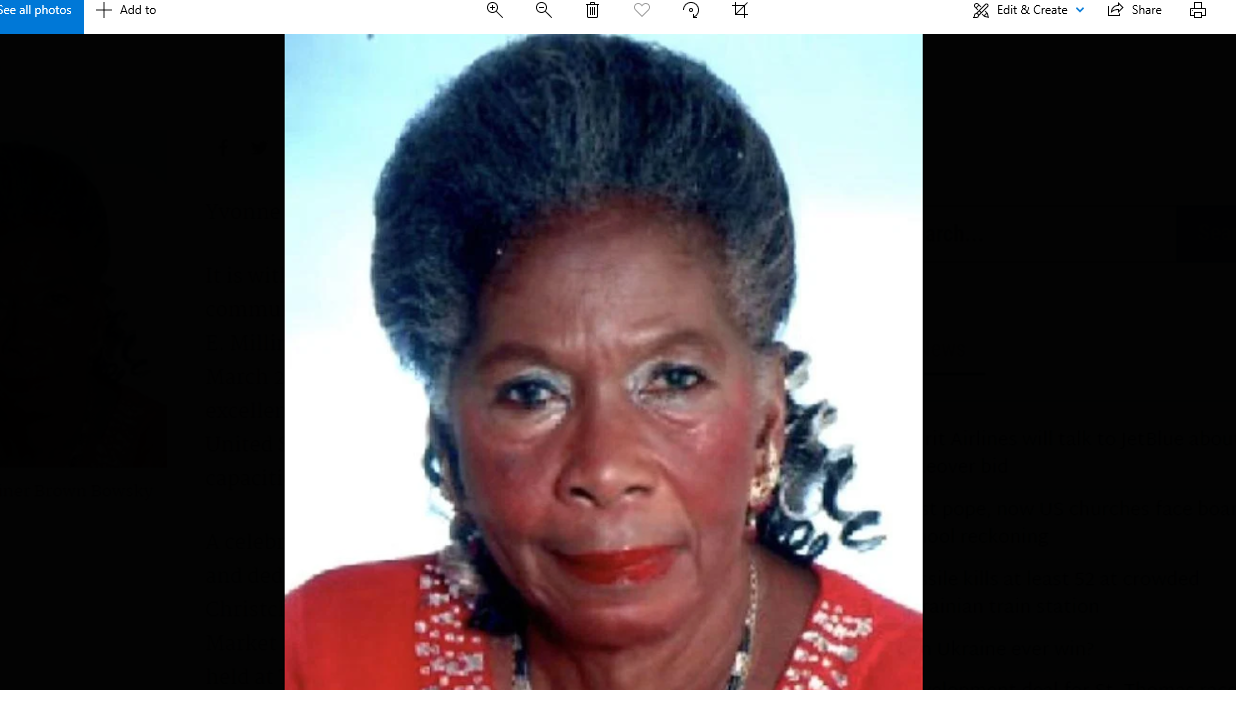 CHARLOTTE AMALIE — It is with profound sorrow that we inform the Virgin Islands community of the sudden passing of our beloved Mrs. Yvonne E. Milliner Brown Bowsky at 87 years of age on Tuesday, March 22, 2022, in Atlanta, Grorgia.

Mrs. Bowsky, an educator par excellence, and businesswoman served the British and United States Virgin Islands communities in many different capacities during a 56- year career.

A celebration of Mrs. Bowsky’s vibrant life and legacy of love and dedication is scheduled for Thursday, April 21, at the Christchurch Methodist Church in the Rothschild Francis Market Square on St. Thomas, USVI. The first viewing will be held at Turnbull’s Funeral Home on Wednesday, April 20, from 4 to 6 p.m. following a processional tribute at the Yvonne E. Milliner-Bowsky Elementary School. The second viewing and tributes is scheduled at Christchurch Methodist from 9:30 to 10:30 a.m., immediately followed by the funeral service. Interment is at the Western Cemetery No. 1.

Mrs. Bowsky served as Insular Superintendent of the St. Thomas-St. John School District from 1989 until her retirement from government service in 1994. In that capacity, Mrs. Bowsky successfully led the efforts to obtain reaccreditation of Charlotte Amalie High School and the accreditation of Eudora Kean High School for the first time in its history.

In 1973, then Education Commissioner Dr. Harold Haizlip, seeking to relieve the overcrowding and double sessions for students enrolled in the Joseph Gomez and Joseph Sibilly elementary schools, appointed Mrs. Bowsky to the principalship of a new elementary school at the recently acquired abandoned Peace Corps site. However, when Mrs. Bowsky arrived at the site she was astonished to find that Peace Corps Elementary School was not yet a school. She was stunned to see a complex of derelict abandoned dormitories, some still filled with bedding and household items. The site was overgrown with grass, shrubs and trees, and the buildings did not have electricity or screens for windows and doors. There were just a few desks, chairs, and books, and neither money nor budget had been allocated for the school. Nevertheless, the visionary and resourceful Mrs. Bowsky foresaw the potential for a school. She marshalled all the resources and services that could be secured from family, friends, her sparse faculty, parents, and other principals to welcome 400 students to the campus within one week, with some classes being held outdoors on the then manicured campus grounds.

By the end of her first year, Mrs. Bowsky had spearheaded the transformation of the abandoned Peace Corps site into a viable elementary school with a reputation for educational excellence within the community. As principal, she then provided 15 years of dedicated service to the children, parents, and faculty in the Peace Corps school community. On Sunday, May 7, 2006, Mrs. Bowsky’s beloved school was renamed in her honor as the Yvonne E. Milliner-Bowsky Elementary School in recognition of her visionary leadership and years of devoted services as the “founding principal” who transformed an abandoned Peace Corps site into an excellent learning facility.

Mrs. Bowsky was born to the Milliner family who resided on Jost Van Dyke, British Virgin Islands. There she attended school up to the seventh standard and at age 14 was appointed to the position of “pupil teacher.” Mrs. Bowsky, then lovingly known as “Teacher Yvonne”, taught the first-grade class on Jost Van Dyke for two and a half years. She then resigned her position to further her education in the United States. She graduated from Morris High School in the Bronx, New York, and then received her bachelor’s and master’s degrees in secondary education from the New York University School of Education. Mrs. Bowsky continued post-graduate studies at the University of Hartford in Connecticut and the University of Illinois in Urbana-Champaign.

In 1966, Mrs. Bowsky relocated to St. Thomas where she began her illustrious educational career with the Virgin Islands Education Department as an elementary teacher at Joseph Sibilly and Lockhart elementary schools. In 1968, while completing the student-teacher requirements for certification as a secondary mathematics teacher at the Charlotte Amalie High School, and because of a shortage of math teachers, she was offered a full-time position, which she accepted, but refused compensation. She instead donated her time and services so that the students could complete their mathematics requirements for graduation.

Mrs. Bowsky’s educational journey in the U.S. Virgin Islands also included positions as assistant principal at Ulla Muller Elementary School; mathematics teacher with the Adult Continuing Education and Adult Basic Education Programs at Joseph Gomez, J. Antonio Jarvis and CAHS; part-time instructor for 15 years in the Teacher Education Division’s Math Skills Program at the then College of the Virgin Islands and president of the St. Thomas-St. John Administrators Association for three terms during which she facilitated the unionization of V.I. educational administrators. She also united the educational administrators for both districts and led both associations to their first negotiated two-year labor agreement contract in 1980.

The multi-talented and highly energetic Mrs. Bowsky served the Virgin Islands in many other capacities. In 1986, while holding the positions of principal of Peace Corps Elementary School, part-time instructor at CVI and an Adult Education teacher, she also served as the Farrelly-Hodge gubernatorial campaign manager and was successful in her quest to elect the first Democratic governor of the USVI. In 1987, Mrs. Bowsky resigned her principalship at the Peace Corps School to accept Gov. Farrelly’s appointment as special assistant to the governor with oversight for audits. During her tenure as special assistant, she assisted in the reorganization of the local Bureau of Audits and Control and facilitated the creation of the position of inspector general for the Office of the Inspector General.

During her retirement years, Mrs. Bowsky remained highly active in the Virgin Islands community. She was the CEO and owner of Bowsky Auto Sales and Car Rentals, Inc., and was intricately involved in its day-to-day operations for 28 years; from its establishment in 1994 until Friday, Feb. 18, 2022, when she became ill. Despite her involvement in Bowsky Auto Sales and Car Rental, as well as other family businesses, she found time to be a volunteer math teacher at her cherished Yvonne E. Milliner-Bowsky Elementary School from 2003 to 2008. Additionally, she served as a member of the Virgin Islands Humanities Council, member of the Vocational Education Council, member of the Inner Wheel Organization, trustee on the Government Employees Retirement System Board for 10 years, and life-long active member of Christchurch Methodist Church where she served as Sunday School superintendent from 1998 through 2002.

All COVID-19 protocols will be observed.