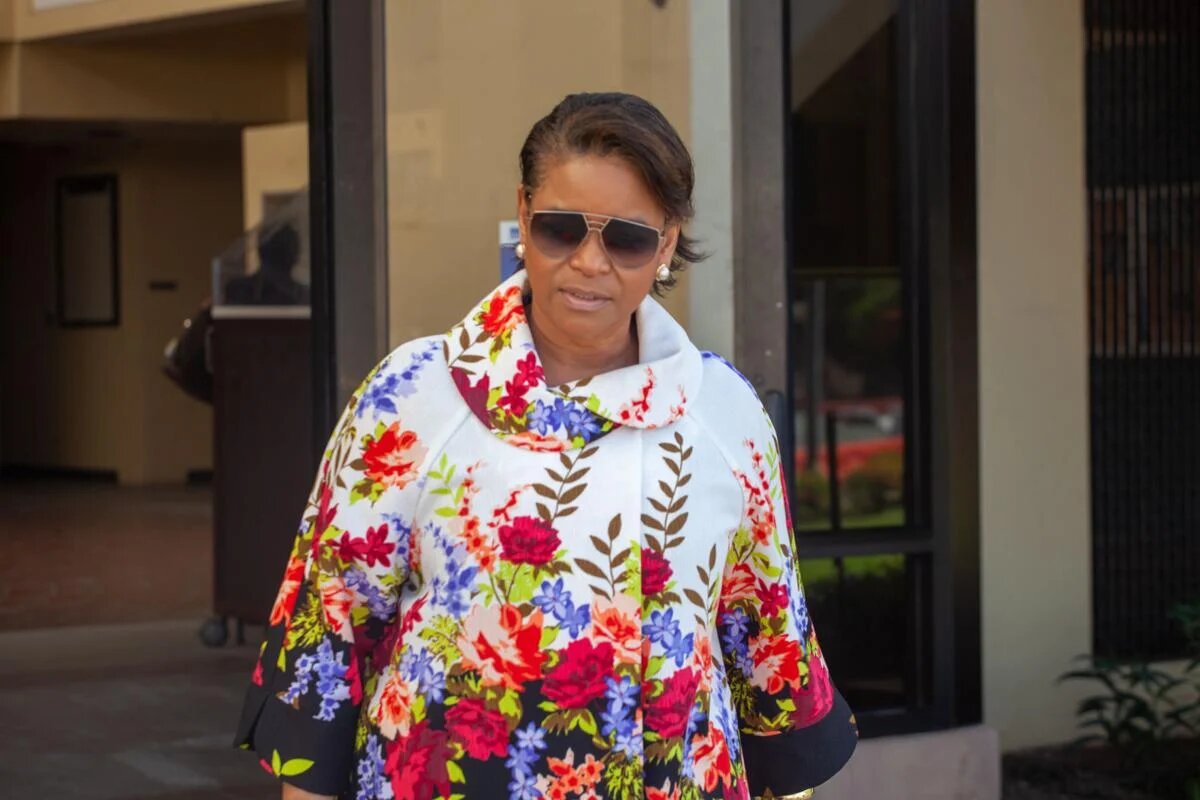 GOLDEN ROCK — Stephanie Barnes, who was found guilty of stealing money for lavish spending sprees and vacations alongside former Virgin Islands Casino Control Commission Chairwoman Violet Anne Golden, has filed a lengthy affidavit arguing that the judge overseeing her case should recuse himself before sentencing.

Her attorney, Martial Webster, filed a three-page motion for recusal Wednesday, citing assertions Barnes made in an 18-page affidavit signed and dated Tuesday, according to court records.

Webster said Barnes “accuses the Honorable Judge Molloy of having a personal relationship not only with the Defendant Violet Anne Golden and her family, but also with a key government witness, Racquel Concepcion,” and clarified that “personal relationship” means a close connection “of the type normally viewed as likely to induce partiality.”

Barnes, 62, is currently being held at the Metropolitan Detention Center in Guaynabo, Puerto Rico, while she is awaiting sentencing, which had been set for Monday.

Following a status conference on May 25, Molloy continued sentencing but did not set a new date, and gave the parties until June 10 to file sentencing documents.

Barnes is likely facing up to eight years in prison after a jury convicted her on December 23 of three crimes, conspiracy to commit theft from programs receiving government funds, conversion or theft of government property and filing a false tax return.

In the affidavit, Barnes explains in detail why she feels Molloy cannot continue to oversee her case, and why she was unfairly prejudiced when Molloy declined to compel former Governor John de Jongh Jr. and Governor Albert Bryan Jr. to testify at trial.

Barnes wrote that she asked Molloy during an April 22 telephone conference about “information provided to me by Violet Anne Golden and others that he, Judge Molloy, and his family are close personal friends with Defendant Golden and her family,” according to the affidavit.

Molloy denied Golden’s request for early release after serving 13 months in prison, writing that “Golden is the latest in a too-long line of corrupt public officials who undermine the trust that Virgin Islanders have in their government.”

Unlike Barnes, Golden admitted her guilt and signed a plea agreement with prosecutors. Golden was released from prison on September 24 after serving a little over 20 months behind bars, and testified against Barnes at trial.

In the affidavit filed Wednesday, Barnes detailed several complaints about the way the trial was handled and asserted that Molloy was biased against her, and favored Golden.

“It is my belief that the cantankerous and disrespectful behaviors and rulings against me during the trial were predicated on Judge Molloy’s allegiance to the individuals listed below and to make ‘atonement’ for his close personal friend, Violet Anne Golden,” Barnes wrote.

Barnes said Golden and her family are close friends with Molloy’s family, and the individuals she claims Molloy has allegiance to are Judge Jessica Gallivan.

Gallivan, “Golden’s best friend and first cousin, is a close personal friend of Judge Molloy,” based on information from investigator Antonio “Ricky” Messer, according to the affidavit.

Barnes said attorney Jeffrey Moorhead is Molloy’s half-brother and is someone who “Golden considers her close personal friend,” and was also a legal consultant for the Casino Control Commission during Golden’s tenure, according to the affidavit.

Molloy denied the defense’s request to subpoena Bryan, according to Barnes, which “denied me a fair and impartial trial. As a matter of fact, Judge Molloy considers Governor Bryan his close personal friend.”

Barnes wrote in the affidavit that Bryan “was an important witness to my defense and would have testified to my professional experiences as a trainer and program developer, which the prosecution continues to include in their erroneous theory that I am uneducated and unqualified to conduct the scope of contracted work I conducted for the casinos and VICCC.”

The juries found that evidence showed Barnes conspired with Golden between 2015 and 2018 to steal hundreds of thousands in government funds that the women spent on luxury travel, jewelry, clothes, alcohol, college courses, car repair, and other personal expenses unrelated to government business.

Prosecutors successfully argued that Barnes was not qualified to perform the problem gambling education services Golden contracted her for, and Golden used Commission funds to pay for Barnes to obtain certifications not provided for in her employment agreement.

But in her affidavit, Barnes pointed to her previous work as coordinator for the Americans With Disabilities Act in the territory, and said Bryan “would have to testify” about her good work with government funds under that program.

She said Walker was hired by Golden as a paid legal consultant for the Commission, and Barnes said she has filed grievances against Colon, her former defense counsel, “for violation of a plethora of ethical standards.”

Barnes detailed several instances in which she was told by someone else that Molloy had done or said something related to the case, including an incident in which Molloy told Messer the day after the verdict that “his hands were tied in Barnes’ case,” according to the affidavit.

“One can argue that this statement could mean anything, however, given the plethora of conflicts of interest and semblance of conflicts of interest Judge Molloy has in this case, it can be interpreted as evidence in alignment with his biased decisions and disrespectful verbal and non-verbal behaviors toward me and my attorney during the entire trial,” Barnes added.

She said Molloy has a close relationship with prosecution witness Racquel Concepcion, who testified about “disparaging remarks and blatant disgusting pathological lies told to her by Golden,” according to the affidavit. “Judge Molloy allowed the prosecution witnesses to disparage my character based on erroneous ‘hearsay’ information in alignment with their ridiculous theory of an existence of a ‘lesbian relationship,’” between her and Golden.

“These and other vile lies were entered into evidence negatively prejudicing the jury against me,” Barnes wrote.

Barnes said that “Claude Molloy Jr. is the brother of Judge Molloy and a former friend of my sister, Senator Alicia Barnes,” and the two were in a relationship that ended with her sister filing a restraining order, according to her affidavit. “Judge Molloy’s hostility toward me and my attorney were borne out of these deep rooted conflicts of interest.”

Barnes added that she is “demanding a retrial of my case,” and continued to rail against Molloy for several additional pages, and claimed that Molloy “failed to ask the jurors, in a culture not openly accepting of the LGBTQ community, if he had any biases or prejudices against the LGBTQ community,” Barnes wrote.

Barnes detailed other “egregious acts of abuse of authority” by Molloy and what she described as “manipulation of the jury pool.”

Barnes wrote that, “the most outrageous behavioral manipulation demonstrated in the courtroom was observing Judge Molloy use of ‘food,’ the jurors’ lunches, as a stimulus to produce his desired outcome,” according to the affidavit.

Molloy asked the jurors after they returned from lunch each day whether they liked their meals, “and going as far as asking them to clap for the ‘good food’ that was being delivered,” according to the affidavit.

Barnes implied that this led jurors to unquestioningly agree with everything Molloy said, including a statement that one of her pieces of testimony was “inconsistent,” and said Molloy “has consistently demonstrated a pattern of behaviors that is premeditated and calculated biases against the defense.”

Molloy typically asks jurors about the quality of the food they’re served during lunch, and did so at the recent trial of boxer John Jackson.

Barnes concluded the affidavit by saying that Molloy’s “plethora of conflicts of interest clouded his judicial and ethical decision-making process. Judge Molloy should now make an honorable decision and recuse himself from making any further decisions in my case.”

Messer, during a call on a separate matter, told The Daily News he’s retained an attorney to “totally refute” Barnes’ claims. Others mentioned could not immediately be reached for comment.

Molloy has not yet ruled on Barnes’ motion.