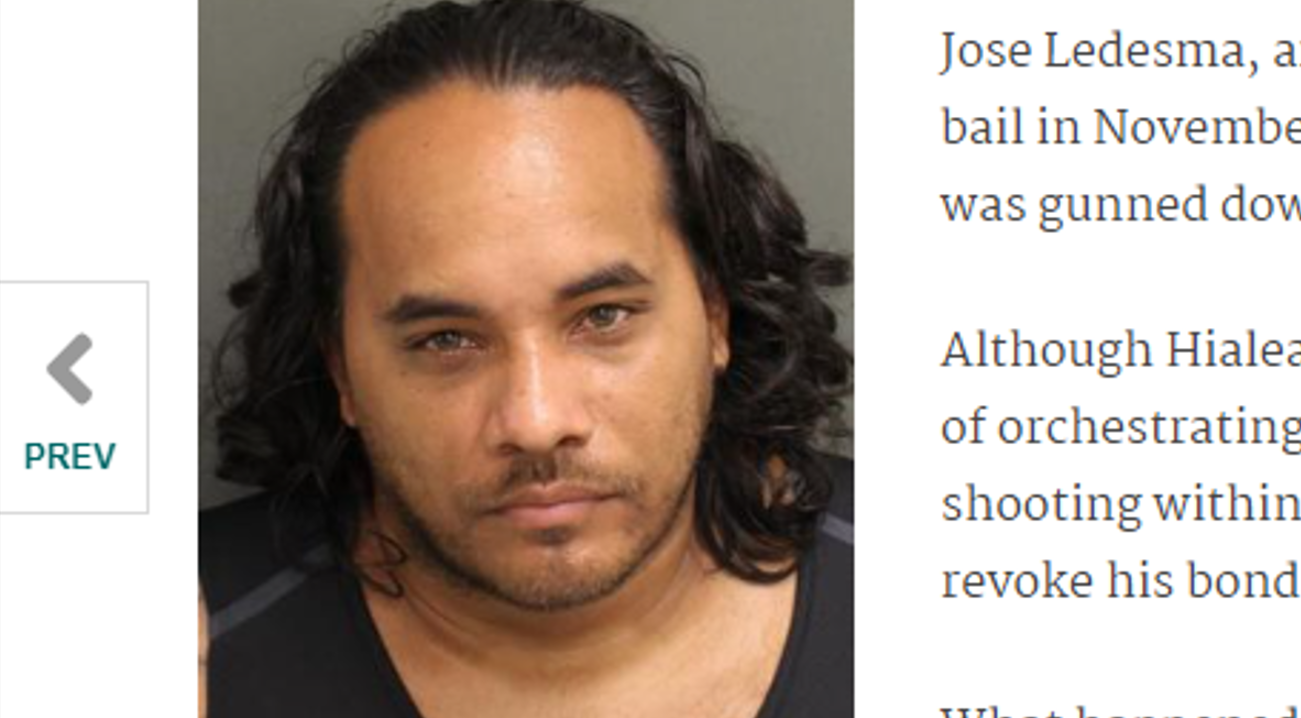 MIAMI — Jose Ledesma, an accused St. Croix identity thief, was free on bail in 2019 when the key witness in his upcoming trial was gunned down at a Hialeah, Florida strip mall.

Although Hialeah detectives immediately suspected Ledesma of orchestrating the attack — his brother was charged for the shooting within days — Orlando prosecutors never moved to revoke his bond and return to him to jail.

What happened next? Several weeks after the shooting in Hialeah, Ledesma raped a 15-year-old girl, Orlando police say. The girl wound up pregnant. Cops have now jailed Ledesma, and he’s facing three separate criminal trials in Orlando — plus the ongoing murder probe in Miami-Dade County.

The newest charge, plus newly- released evidence in his cases, add more layers to the story of Ledesma, a 37-year-old ex-con from the U.S. Virgin Islands who has a long history of domestic violence and identity-theft arrests.

The Orange County State Attorney’s Office has not responded to requests for comment on why it never moved to put Ledesma back in jail after the witness in his case was gunned down.

But now, citing the sex-assault allegations and the arrest of his brother in the Hialeah witness murder, Orange County prosecutors are finally asking a judge to order that Ledesma be held behind bars while he awaits trial on his cases there. A hearing will be held Friday before an Orange County circuit judge.

“His pending charges … and the fact that his brother has been charged with the murder of the victim in his fraud case, make him a flight risk and a risk to the community,” Orange County assistant state attorney Jenny Rossman wrote in the motion filed last week.

According to police, the girl told authorities that Ledesma raped her in November, the same month as the Hialeah shooting, and then again twice around Christmas. Police said that he later tearfully told the girl’s mother that he would be “getting the death penalty” for a case in Miami and he “did not want to go out like that,” according to an arrest warrant.

Ledesma was charged with sexual battery and has been jailed since his arrest on January 14. Hialeah detectives are still working toward building a case against Ledesma for the Hialeah case, but he has yet to be charged.

Back in 2015, he was implicated in a series of ID thefts and credit-card fraud cases in Orange County. In one case, Ledesma stole his landlord’s IDs, hacked into his email and other computer accounts and used his credit to rack up debt.

“He could not believe Ledesma had so much of his personal information,” a detective wrote in an arrest report. The victim “explained to me that these series of incidents over the past months had caused him great stress on him and his family. He said that dealing with all the fraud and credit issues caused him to take attention away from his work and he was recently let go from his job as a result.”

Ledesma eventually pleaded guilty and served two years in state prison. He got out in 2017.

He’s been in and out of trouble since, including arrests for a series of domestic-violence incidents. In February 2018, Orlando police said, he pointed a black handgun at a man who confronted him over Ledesma allegedly stealing his identity.

Ledesma was charged with aggravated assault with a firearm, a case that remains open. Detectives investigated further by sifting through trash outside Ledesma’s home. They found envelopes addressed to Carmen Ramirez, a Hialeah dentist, as well as another South Florida victim.

An Orlando detective called Ramirez, who told him that somebody had used her identity to start at least four credit card accounts. The hacker even managed to gain control of her cellphone line, police said. Police identified Ledesma on surveillance cameras using the fraudulent cards to make purchases, according to court documents.

Ledesma had been free on bond awaiting trial on both cases. The trial in Ramirez’s case had originally been set to start in December.

But on November 19, Ramirez was gunned down in a bold daylight ambush outside her office in a Hialeah strip mall. She was rushed to Jackson Memorial Hospital where she later succumbed to her wounds.

Investigators found surveillance video they believe showed Ralph Benjamin and Hector Ledesma, his brother, casing the dentist’s office the day before the shooting, even buying drinks at an adjacent supermarket. Hector Ledesma was also seen walking in the neighborhood, other footage showed.

At Walmart, cameras also captured the two buying clothes that Benjamin is believed to have worn during the shooting.

On the day of the shooting, video showed Benjamin getting dropped off at the same market, where he bought a Heineken beer and Marlboro cigarettes just before Ramirez was shot.

As Ramirez walked up the stairs, according to a Hialeah police report, Benjamin “approached the victim and shot her numerous times.”

During a fast-moving investigation, Hialeah detectives tailed Hector Ledesma and Benjamin as they boarded a flight bound for the Virgin Islands. They were arrested when they arrived for a connecting flight at Miami International Airport on Nov. 21, according to court documents.

To police, Hector Ledesma blamed Benjamin, saying he dropped him off to buy marijuana and “observed defendant Benjamin with both arms up in a shooting stance, and saw muzzle flash as numerous shots were fired,” according to a police report.

Hector Ledesma and Benjamin have been indicted for first-degree murder and face the death penalty. Hialeah detectives are still building a case against Jose Ledesma for the murder.

Jose Ledesma is believed to have supplied the Vanilla Visa gift card to the two killers used to pay for expenses on the trip, secured the black BMW used in the killing and paid for the travel expenses for Benjamin, according to one law-enforcement source. The gift card was also purchased at an Orlando 7-11 convenience store where Ledesma worked, the source said.

CALL TO THE COPS

Ledesma knew detectives were asking around about the gift card.

Days after his brother’s arrest, he arranged to meet Hialeah Detective Magy Montalvo in Tampa, then blew off the meeting. Later, he called the detective, wondering why police were inquiring about the gift card.

In a recording of the call released by the Orange County State Attorney’s Office, Ledesma appears to be fishing for information, insisting that his brother was only tagging along for a drug deal. Ledesma blamed Benjamin, suggesting some sort of convoluted plot that Benjamin was trying to frame him for murder because Ledesma was going to implicate him in identity theft.

“He knew I was going to roll over on his ass,” Ledesma told the detective, according to the newly released audio.

Ledesma swore he would give Hialeah detectives evidence tying Benjamin to the murder. “I want to help my brother,” Ledesma said. The offer of help, however, never materialized.

Back in Orlando, prosecutors could have asked a judge to put Ledesma back behind bars based on the killing of the witness, even if he hasn’t been charged. Under Florida law, judges have discretion in deciding on pretrial detention, especially if they find a “substantial probability” that a defendant “attempted or conspired” to obstruct justice or hurt a witness.

Allison Freidin, a former Miami-Dade prosecutor, said the State Attorney’s office in Orlando had “an unequivocal duty” to bring the witness death to the attention of the judge to revisit the conditions of his bond.

“Especially when considering this defendant’s designation as a career criminal, it seems as though a judge would not have a tough time identifying the threat of danger Mr. Ledesma poses to the community,” said Freidin, who is not involved in the case.