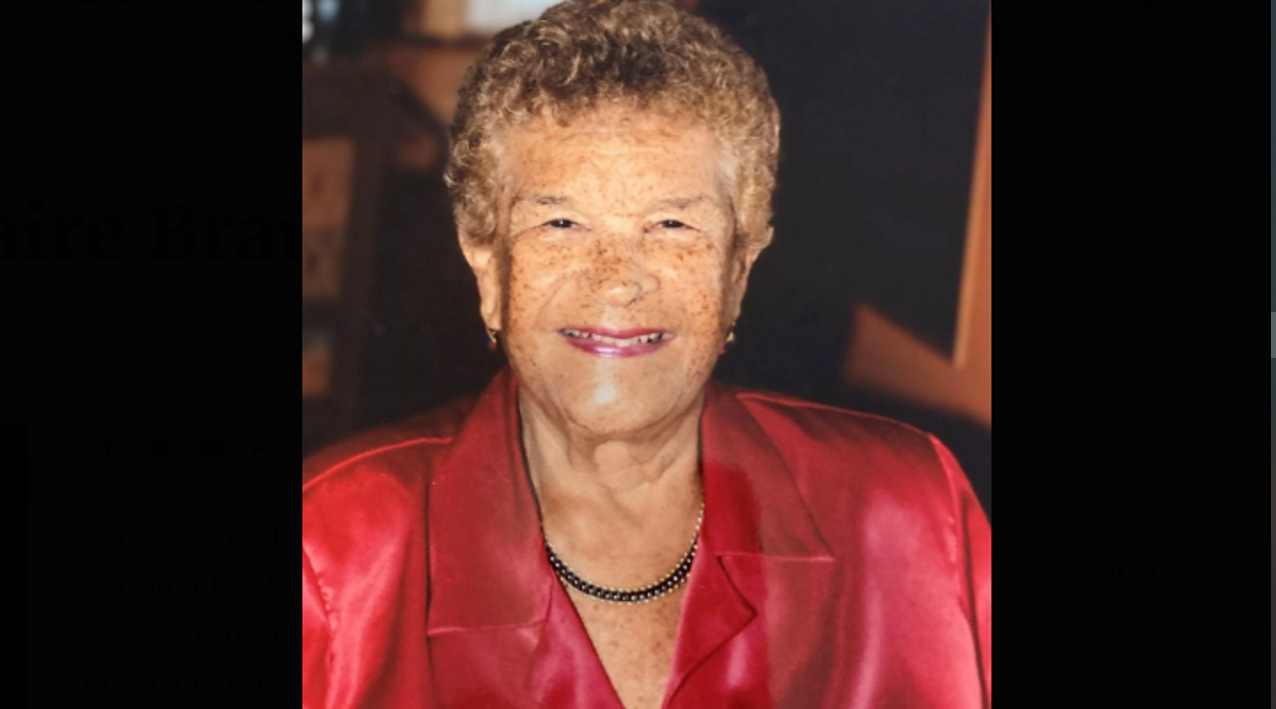 Marie-Claire Braure, also known as Choupette, was born in Petionville, Haiti, in her family home on June 8, 1936. She survived complications from her mother’s birth, but unfortunately her mother, Emma Gauthier Jeanton, did not.

She was brought up by her aunt, Rene Gauthier, who later became Rene Jeanton. Ten years later, Choupette became a big sister to Guy-Michel Jeanton.

Choupette attended her early schooling in Haiti until the age of 17. At this time, her father sent her to study in France, where he had attended architectural school at Les Beaux Arts in Paris. She lived with a large family and was embraced by the Vincents while she lived in Paris. Choupette graduated from L’Ecole Hoteliere de Geneve (Culinary Institute of Geneva, Switzerland) and went on to work in the hotel industry in Europe, Canada, and St. Thomas.

She met Jean Braure while on a trip to London, and they married in Geneva in 1959. She was engaged when she met Jean, but he swept her off her feet. Her family encouraged them to come home to Haiti, where she gave birth to her first born, Murielle. She always supported her husband in his endeavors, and they decided to move to the Caribbean. They lived in the Bahamas, and Fort Lauderdale, Fla., before settling in St. Thomas, U.S. Virgin Islands. In the next three to five years they would drive during the summer from Florida to Gaspe, Quebec, Canada, and mind their motel business L’Auberge de France. Once the business was sold, the family moved to St. Maarten for one year to run a hotel there as well.

Choupette and Jean tired of the hotel industry and Choupette started working for the University of the Virgin Islands in the 1974, where she gave 35-plus years of her life. Choupette had the reputation of getting the job done, without harboring animosity. Many professors, staff and faculty would come to her to sort out their financial work woes. During this time, she helped shape some of the classes at the UVI in the hotel industry. Choupette also participated a play that UVI put on by Rosemary Harper in which she was the eccentric family manager.

She traveled extensively to places like Russia, South Korea, Japan, Europe, Alaska and South America. She would travel to Europe every summer while working and after her retirement. Jean took Choupette on a 28-day cruise around South America for their 50th wedding anniversary. Choupette traveled with her family extensively. Choupette and Jean harbored many individuals during the hurricanes that hit the island. She was always known for her hospitality that came with a smile. She loved a beautiful table and was known for her delicacies and dishes. Later, when hurricanes Irma and Maria hit the island and devastated it, the Braures moved to Tamarac and settled in the Kingspoint community, which they enjoyed because they were near the grandchildren.

Jean and Choupette celebrated their 63 years of marriage in September 2021. Choupette is survived by her husband, Jean; daughter and son-in-law, Murielle and Mukesh; her two grandchildren, Gianna and Rafael.

She had survived her parents and her younger brother. Due to her gentle nature, beautiful smile and unassuming presence, she left her mark on individuals all over the world.

The celebration of life will be held at the Alexander-Levitt Funerals and Cremations in Tamarac, Florida, on Wednesday, Aug. 24, at 12:30 pm. The public is advised to come around 12:15 p.m. The celebration starts at 12:30 p.m., followed by the burial at Bailey’s Cemetery in North Lauderdale, Florida, at about 2:15 p.m.

If you would like to participate in the celebration of life for Choupette, the link is below. If you would like to recount a special memory of how she touched your heart or a tribute to be read at the chapel or gravesite, email it to Murielle mumubra@yahoo.com. Send your memory by Monday, Aug. 22.

The public is invited to the Viewneral® Funeral Service noted below.