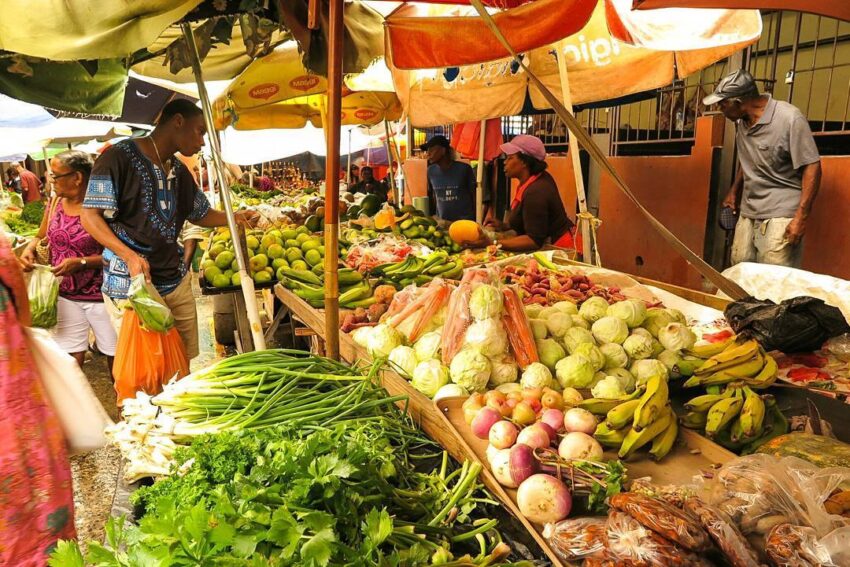 CASTRIES — In response to the global food crisis, Saint Lucia, a small island state in the Caribbean, has rolled out a number of government programs to increase food security, boosting its agricultural production and minimizing its reliance on imports.

And indeed, the country’s recent measures have proved timely. With inflation on the rise even within wealthy countries, it appears that the global food crisis will worsen before it improves. The conflict in Europe has also impacted inflation, having affected how commodities are produced, used and traded across the world. These changes are likely to keep food prices high until 2024, prolonging and worsening international food security.

This state of affairs has proved particularly challenging for many Small Island Developing States (SIDS) which, already on the frontline of climate change, are facing increased food insecurity due to the rising cost of imports. In response to this, Saint Lucia has increased its food production capacities in a bid to overcome its dependency on imports. Under the direction of Alfred Prospere, Saint Lucia’s Minister for Agriculture and Food Security, the government has launched several initiatives to strengthen the country’s production.

These efforts include the government’s Seven Crops project which aims to grow and strengthen supply chains in the fruit and vegetable sector. The Ministry of Agriculture reported that since the introduction of the project, the island has significantly increased production for a number of crops targeted by the program – these include papaya, broccoli, cucumber, pumpkin, cauliflower, eggplant, corn, dragon fruit and sugar apples.

The government also improved its agriculture intelligence information systems, setting up stable markets for farmers and introducing new technologies into the agricultural sector in an effort to lower Saint Lucia’s food import bill. So far, this development has led to an increase in both the quality and quantity of agricultural yields.

In addition to these measures, the government has also offered a 30% subsidy to banana crop farmers to support its export industry. In 2020, bananas were one of the country’s most profitable exports, with crops being sent to Barbados $302,000, Canada $1.412,000 and the United Kingdom $2.61 million.

Saint Lucia’s government has therefore been prioritizing the development and promotion of extensive farming on the island, with the goal of increasing self-reliance in the country’s food supply. By lessening its dependence on imports, Saint Lucia has sought to insulate itself from the ever-rising inflation affecting countries across the world.

Current projections from economic forecasters indicate that further rises in inflation are expected for 2023. This increase will prove particularly onerous for emerging and underdeveloped nations. According to data collected between May and August 2022, most low and middle-income countries have already experienced significantly high inflation, with 88.2% of low-income, 91.1% of lower-middle-income and 93% of upper-middle-income countries having experienced inflation rises above 5%. With domestic food price inflation very high across the world, including in the United States, Saint Lucia is standing firm against the odds.

One factor contributing to Saint Lucia’s success is the active participation of its youth in its agricultural upliftment. Across the world, there has been a decline in young workers entering the agriculture sector. With this shortage of farmers, most major food producers have reported declines in their output – with knock-on effects on food security. However, Saint Lucia’s agriculture minister noted that its youth are actively participating in the sector and that this participation has led to an improvement in the island’s food supply.

Building on this contribution from Saint Lucia’s youth, the government has introduced a number of new policies and subsidies to assist local farmers. These policies are supported by funds from the country’s Citizenship by Investment Programme (CIP). Citizenship by Investment allows individuals to gain citizenship to a country by investing a certain amount in the country’s economy. In Saint Lucia, this investment involves contributing to the National Economic Fund Investment Option which sponsors social development.

Launched in 2016, Saint Lucia’s Citizenship by Investment Program (CIP) is the newest CIP in the Caribbean. The program hopes to establish itself as one of the best program in the world. In line with these aims, the program is already ranked among the top three Citizenship by Investment (CBI) Program in the world, according to the “CBI Index 2022” published by the PWM Magazine of the Financial Times.

High-net-worth individuals can invest in the National Economic Fund Investment, known as the Fund Option, to apply for alternative citizenship in Saint Lucia. The Fund Option allows investors to support the country’s socio-economic advancement as well as the expansion and development of its infrastructure. The minimum investment required is $100,000.

Since the inception of the program, Saint Lucia’s government has time and again proved its judiciousness, allocating the funds generated by its CIP to support socio-economic advancement. The program also operates with a high degree of transparency, with the CIP providing detailed information to investors about how their funds are being used. Most recently, CIP funds have contributed to the uplift of the agriculture sector, particularly to the development of new and advanced farming techniques. The success of this support has become evident, with the country’s food production surging as it progresses towards food security.

Along with its support of Saint Lucia’s development, the CIP has proved exceptionally beneficial to investors. Given the opportunity to become global citizens, investors have thrived, with unimpeded access to the country providing an ideal framework for wealth planning, the expansion of business and access to international business markets.

Defying global uncertainties and crises in these uncertain times, Saint Lucia’s careful investment in food production proves its ability to provide a safe and secure environment for those looking to share in its prosperous future.