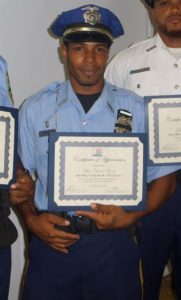 HUSH HUSH BABY: Orlando Benitez Jr. has been fired by the VIPD and no one at the police department is saying why for … so far.

FREDERIKSTED — A prominent, often-honored Virgin Islands Police Department (VIPD) officer has been fired by the force allegedly for conduct unbecoming of an officer.

Details were sketchy as the Virgin Islands Free Press went to press, but a source close to the VIPD said that Orlando Benitez, Jr. had been terminated for official  “troubles.”

Benitez was due to testify in an upcoming court case on behalf of the VIPD, but now that has been fired by the boys in blue — he will refuse to testify for his former employers, the source said, speaking on condition of anonymity.

The pint-sized officer was not well-liked by his colleagues at the VIPD and one told the V.I. Freep today that the news of Benitez being let go by the local police force was the “best Christmas present I could have ever received this year.”

“Benitez was one of the most disgusting police you could ever come across,” said the police officer, speaking on condition of anonymity this afternoon. “He were just sick in he arse. Good for he. He deserve it de man. This is the best Christmas present that I could have ever received this year — there will be cheers at Mars Hill tonight over he being gone.”

A source close to the police Internal Affairs investigation into Benitez’s actions said that the only person with the power to fire a VIPD officer is Gov. Kenneth Mapp. If Benitez is accused of criminal misconduct, it is possible that the police union will instruct him to hire a private attorney, the source said.

But so far, no one at the VIPD will say officially why Benitez was dismissed from his duties as an officer. Even the police investigator was not familiar with Benitez’s troubles when the V.I. Freep attempted to get more details about the “case,” the source said.

“This one is so new — even (name withheld to protect the source) didn’t know why he was shitcanned,” the source close to the investigation said.

The source said that Police Commissioner Delroy Richards Sr. has the authority to recommend to the governor that a police officer by fired, but for legal reasons the ability to fire is vested in the chief executive.

According to official police records, Benitez was often recognized by the VIPD for his “exemplary service” to the local force.

But the police officer the V.I. Free Press asked about him said Benitez was known privately among his other fellow officers as “Mr. Slickster.”

Unlike on the U.S. mainland, there is no minimum height requirement for the VIPD.

The local police force has trouble recruiting Virgin Islanders who have no police record, so several officers currently active on the force are not even five feet tall. 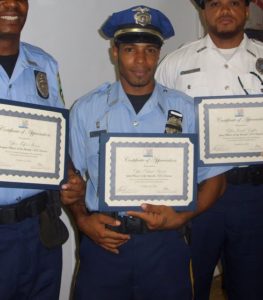 COMMENDED WITH KUDOS: Officer Orlando Benitez, Jr. was frequently recognized by the VIPD for “exemplary service,” but he is out of a job tonight. The VIPD won’t say why he was let go.