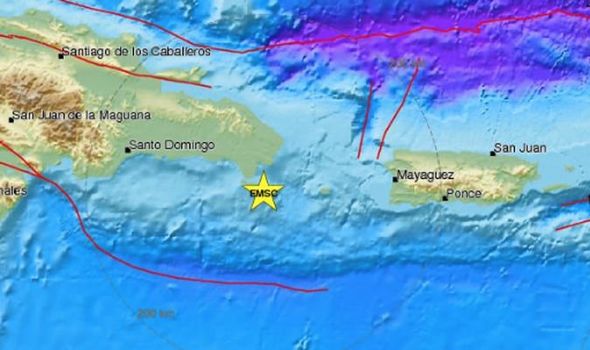 SAN JUAN — A magnitude 5.3 earthquake struck off the southeast coast of the Dominican Republic this morning, rattling nearby Puerto Rico but with no immediate reports of damage or injuries.

The U.S. Geological Survey says the quake hit at 9:33 a.m. today and was centered 19 miles south-southeast of Boca de Yuma at a depth of 42 miles.

“Very strong in Santo Domingo, felt on the 10th floor of a residential complex,” they said. “Long and strong movement with small objects displaced.”

“We definitely felt it here in Punta Cana,” they wrote. “No damage to speak of but strong enough to scare the cat.”

Officials with Puerto Rico’s Seismic Network say the quake was felt along the commonwealth’s western coast.

The USGS said the quake could also be felt in the Bahamas, Turks and Caicos and Haiti as well.