CHARLOTTE AMALIE – A native of the Dominican Republic admitted in federal court to bringing at least 2,204 pounds of cocaine to the territory by boat.

Dany Perez-Brito, 44, of Santo Domingo, pled guilty to conspiracy to possess a controlled substance on board a vessel subject to the jurisdiction of the United States, U.S. Attorney Gretchen C.F. Shappert said.

After being detected, the go-fast vessel led authorities on a ten-hour chase in international waters between Puerto Rico and St. Thomas.

USCG personnel were able to board the vessel when it finally went dead in the water approximately 96 nautical miles north of St. Thomas.

Upon boarding the vessel, authorities discovered 52 bales containing a total of approximately 1,132 kilograms of a white powdery substance that field tested positive for cocaine.

In court, Perez-Brito admitted to having conspired to transport the cocaine by boat from Venezuela to Puerto Rico, for which he expected to be paid $200,000.

Perez-Brito faces a mandatory minimum sentence of ten years’ imprisonment, a five-year term of supervised release, and a fine of up to $10,000,000.

This case was being investigated by the USCG, U.S. Customs and Border Protection (CBP) Air and Marine Operations (AMO), Homeland Security Investigations (HSI), and the U.S. Drug Enforcement Agency (DEA).

It is being prosecuted by Assistant United States Attorney Meredith Edwards. 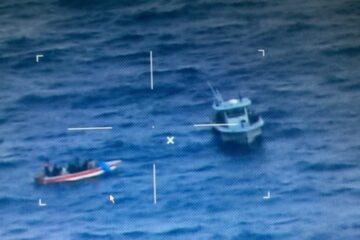