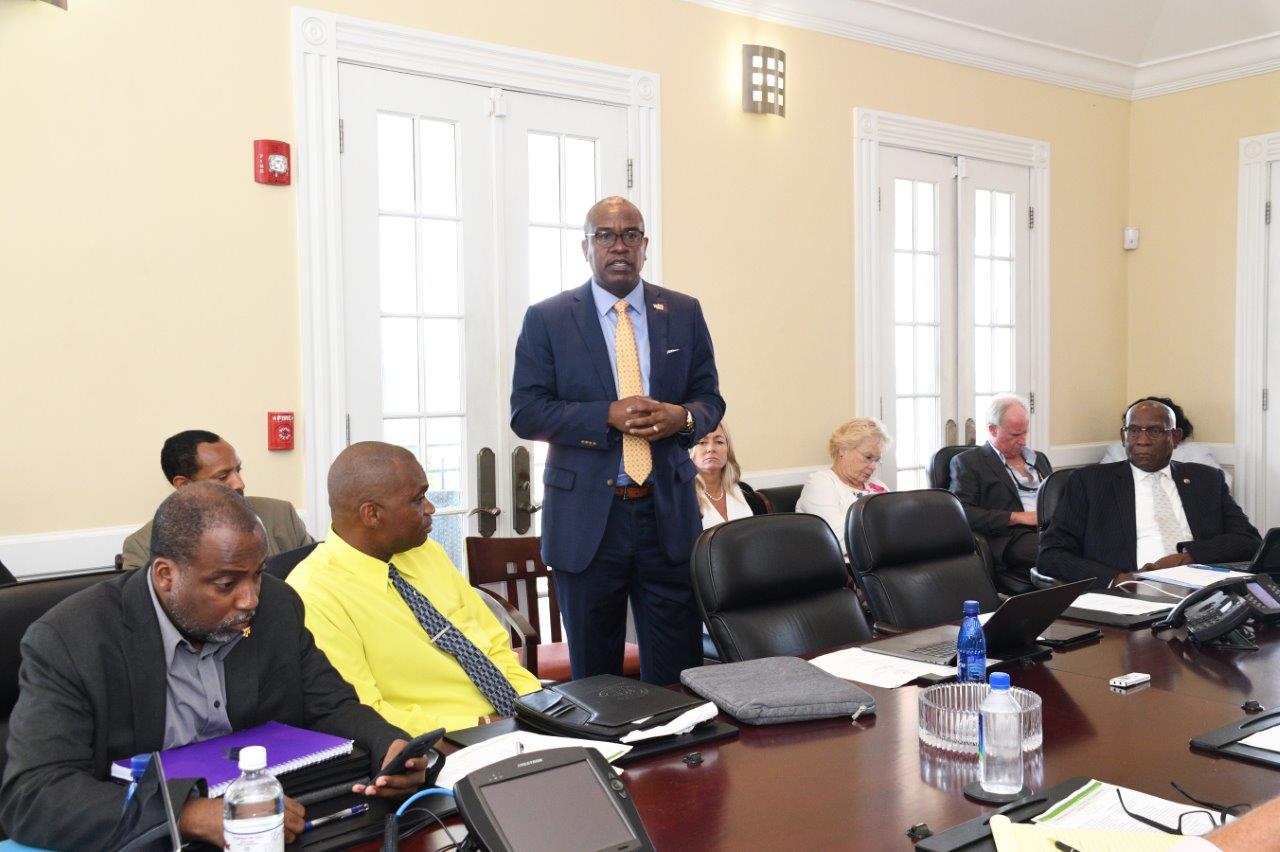 A group of about 30 local business owners, members of non-profit foundations, representatives from the Tourism industry, government officials and other community stakeholders heard presentations about the plans to upgrade the airports and to transform the Virgin Islands Water and Power Authority to reflect the governor’s vision of increased reliance on renewable energy and decentralized power production.

Bryan opened the meeting, which was chaired by the Virgin Islands Bureau of Economic Research’s Senior Policy Analyst Donnie E. Dorsett, with a call-to-purpose for the group.

Bryan first convened the CEDS group on March 6 as a means to focus on rebuilding efforts and economic resiliency, and it falls under the auspices of the Bureau of Economic Research. The CEDS plan, which was developed with assistance from the U.S. Department of Commerce, is guided by the private sector, while the public sector supports the plan’s framework.

“We have a whole set of things that we’re trying to do as an administration, and we need the private sector’s help. We need your support,” Bryan told attendees. “At the end of the day, capacity in the human resource is our real challenge. Good people who can take the initiative and have the skills to get it done.”

Cyril E. King Airport on St. Thomas is set to begin Phase 1 of a six-phase, $250 million expansion in February 2020. The scope of the project includes construction of a 700-space parking and transportation center; redesign and modernization of a two-story terminal; installation of jet bridges; additional lounge and concession spaces to provide more eateries, retail stores and traveler amenities; and a dock to streamline entry and departure of guests going to the British Virgin Islands and other destinations.

Henry E. Rohlsen Airport on St. Croix will undergo a four-phase $140 million expansion initially funded by a $7 million grant from the U.S. Commerce Department. The scope of the project includes improvements to the pre-clearance facility; enclosing 5,500 square feet of walkway space to increase seating capacity in the lounge; enclosing the 1,100 square-foot open-air garden to provide additional concessions space; upgrading the mechanical systems; adding a second level to accommodate jet bridges; improve the flow of baggage handling; and redesign the traffic flow.

“To provide world-class levels of service and bring us into the 21st century is no longer a luxury. It is a commodity item,” Mr. Cartwright said. “If you look at the space usage in the terminals right now it’s reversed. We have 70 percent of the space in these terminals is dedicated to operational use, and 30 percent is dedicated to public use. We have to flip that ratio.”

Cartwright was followed by an update from V.I. Water and Power Authority Executive Director Lawrence Kupfer on the five-year plan to transform the through a three-pronged approached including:

Mr. Kupfer said the Federal Emergency Management Agency has signed off on $625 million in mitigation projects that will be 90 percent funded by FEMA with the 10 percent local match paid through Housing and Urban Development monies.

WAPA also plans to increase efficiency by installing smaller, new power generators throughout the territory, instituting a Waste-to-Energy program; exploring interconnection with the BVI power grid, and providing power to cruise ships during port calls to the USVI.

To increase renewable penetration, which currently stands at about 1.4 percent, the utility will increase its battery storage and capacity building with more solar farms, including on St. John and Water Island,  and by adding almost 60 megawatts of additional solar by the end of the project, increasing the renewable energy penetration in the territory to a minimum of 30 percent.

In closing the CEDS meeting, Governor Bryan emphasized the transformation of WAPA as a foundation of bolstering the territory’s economic development and shredding WAPA’s footprint in terms of how much it costs to produce power The goal is to reduce rates and make people energy independent, he said.

“This plan is going to outlast this administration, but you’re going to have to be the ones who make people stick to the plan,” Governor Bryan told the members of the private sector in attendance. “I think for the last 20 years, we had a vision of preserving WAPA at all costs, even if it wrecks our economy. Now we have to have the vision of transforming WAPA to make ourselves energy independent. Let’s keep that money in our economy as we move forward.”