These vessels, most of which were damaged in recent inclement weather, pose a safety hazard to other boats and to seaplanes, Senator Gittens said.

“We are not talking about an eyesore, but a true safety hazard,” the St. Croix Senator explained. “Earlier this month one of the seaplanes actually hit one of these partially submerged vessels, which is very close to the seaplane dock itself. Fortunately, no one was hurt, but the seaplane was damaged and operations were suspended for the day.”

Senator Gittens said he fears someone could be seriously injured if the boats are not removed. In a letter to DPNR Commissioner Jean Pierre Oriol, he urged immediate action to protect the public, as well as the territory.

“The Virgin Islands Government could ultimately be held responsible for any accident,” Senator Gittens said. “I am most respectfully requesting that DPNR take immediate steps to remove these sunken vessels. This is a resolvable problem that has been allowed to linger for far too long.” 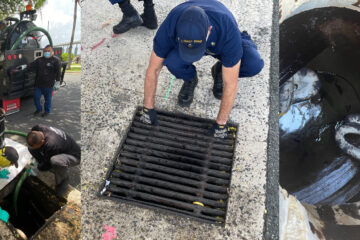