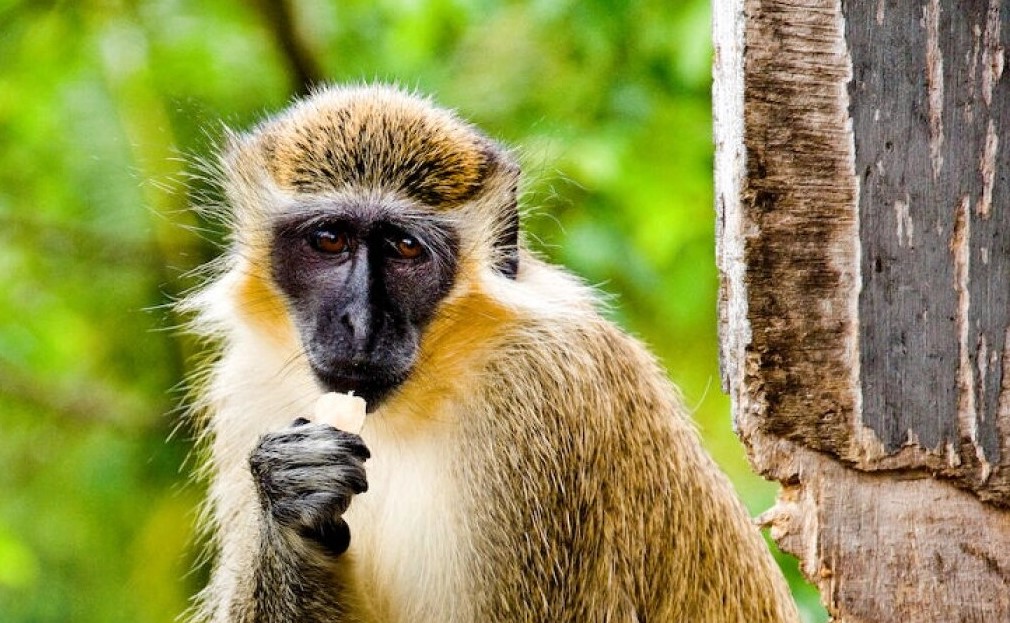 BASSETERRE — As iconic as the islands’ pristine beaches and tropical forests, the 60,000-plus green monkeys of St. Kitts and Nevis are a quintessential part of the Caribbean experience for many visitors.

But while these photogenic mischief-makers might charm tourists, they pose serious threats to the twin-island Federation. Likely first brought to the islands from West Africa as exotic pets by European settlers in the 17th century, today the monkeys are putting pressure on native species, decimating crops and consistently evading efforts to scare them off.

Located in the Eastern Caribbean, like many tropical islands, St. Kitts and Nevis are rich in biodiversity. But many species are fragile and susceptible to outside threats, including invasive animals.

The United Nations Environment Programme and partners are working with the Government of St. Kitts and Nevis to research the impact of green monkeys on biodiversity, agriculture, tourism, and households.

Backed by the Global Environment Facility, the program, formally known as the Preventing COSTS of Invasive Alien Species in Barbados and the OECS Countries project, will also develop a sustainable plan to manage the green monkey population.

“In Barbados, for example, they are also a significant agricultural pest,” Ramnanan said. “While they are present in the wild in other islands, they are not yet a serious pest but they are highly likely to become one.”

The sustainable management plan that will be developed in St. Kitts and Nevis will also be replicated in Barbados and other islands.

Eyes on the wild

The leader of the research team is Kerry Dore, a biological anthropologist with expertise in human-primate interactions.

Dore’s team has already monitored crop losses across 65 randomly selected farms on St. Kitts and is currently monitoring losses on 26 farms and 22 backyard gardens, alongside conducting surveys to gauge the economic toll of green monkeys on agriculture.

Having already discovered the primates have an appetite for a wide range of native fauna, including West Indian tree ferns, opuntia cacti, bromeliads, heliconias, and philodendron, the researchers are now planning to gauge the toll of the monkeys on the Federation’s bird population. By mimicking the nesting behavior of locally important bird species across a wide range of habitats with quail eggs planted in fake nests the team hopes to measure the scale and pattern of the monkeys’ predation.

“Broadly speaking, we know that invasive species are the number one threat to biodiversity on islands,” Dr. Dore says. “Our goal for this portion of the project is to obtain the information the government needs to make informed management decisions that will benefit the environmental health of the Federation.”

With data from the ongoing research to be used to assess the economic impact of green monkeys on St. Kitts and Nevis’ agricultural sector and biodiversity, work to evaluate the monkeys’ impact on tourism and households will begin in the fall of 2020.

A regional approach to monkey management

Regional collaboration with Barbados is ongoing and includes a citizen-science initiative to determine the monkeys’ range and population density on that island. The program’s ultimate goal is to create a scientifically-informed strategy to manage green monkeys and limit their impact on agriculture, biodiversity, tourism, and households around the Caribbean.

UNEP biodiversity expert Christopher Cox said the spread of invasive species, along with ecosystem degradation due to human activity, is one of the greatest threats to flora and fauna in the region.

“With the ever-increasing trade and movement of people through borders, the risk of introduction of harmful exotic species will remain high,” said Cox. “But by working together on a science-based, humane approach, we hope monkeys, people and native species can coexist—and the amazing biodiversity of this region can continue to thrive.”