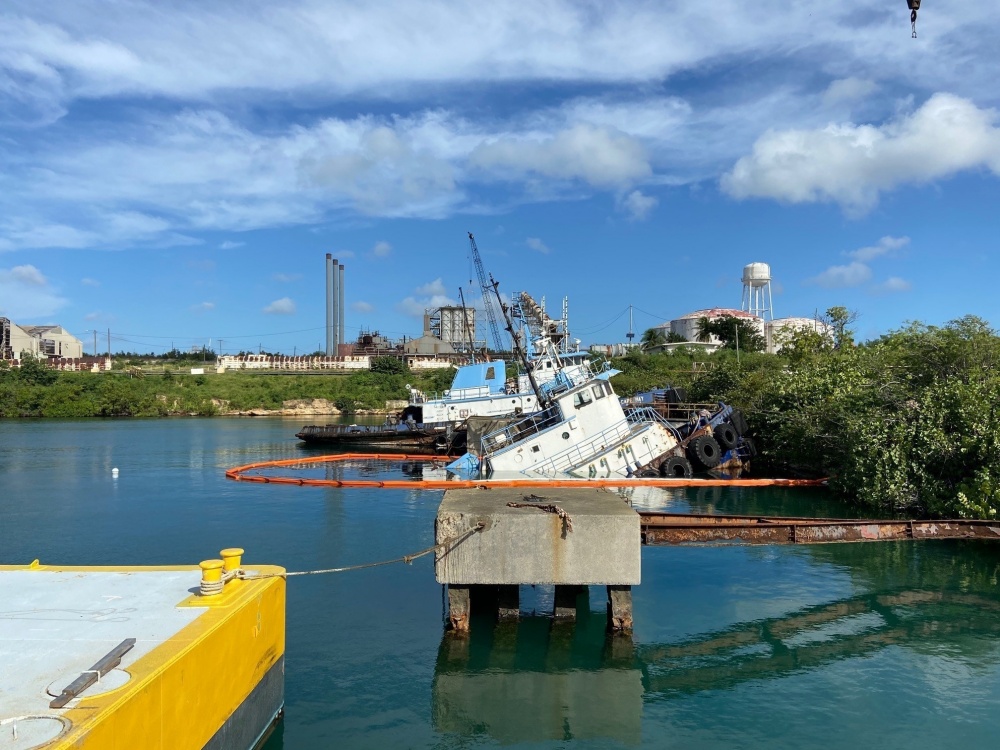 CHRISTIANSTED — The U.S. Coast Guard is working to clean up oil leaking from an abandoned tugboat in Krause Lagoon on St. Croix’s south shore.

The amount of oil discharged from the Cape Lookout remains unknown, while the maximum potential discharge based on the size of the vessel fuel and lube oil tanks is approximately 48,000 gallons of fuel and 2,000 gallons of lube oil. It is unknown how full both tanks are at this time.

“Due to the immediate pollution threat this vessel represents to the environment and surrounding area, the Coast Guard is working to open the Oil Spill Liability Trust Fund to hire an Oil Spill Removal Organization to conduct clean-up operations,” Lt. Cmdr. Alberto Martinez, Sector San Juan Incident Management Division chief, said. “Once an OSRO is hired, the company will provide specialized personnel and equipment to recover any oil, fuel or potential hazardous materials that may have been discharged into the water or remain aboard the vessel.”

Following a Nov. 12 report from owner/operator of St. Croix Renaissance Group, LLP, Coast Guard personnel from Resident Inspections Office St. Croix, working in coordination with the Sector San Juan Incident Management Division, responded to the scene and confirmed oil coming from the 97-foot tugboat. The Cape Lookout remains tied to a concrete platform at the facility partially sunk with its bow sticking out of the water.

At this time, approximately 85 percent of the spilled oil remains contained within the absorbent and containment boom that is surrounding the vessel, while the remaining material remains within an area that extends approximately 50 yards from the vessel.

“Our main priority is to complete the hiring of the OSRO to stop the discharge of oil and take the necessary actions to properly clean-up and eliminate any further threat of pollution from this vessel,” said Petty Officer 1st Class Brian Webster, Coast Guard Marine Science Technician at RIO St Croix. “As clean-up operations take place, we will continue to investigate and work with the National Pollution Funds Center to determine a responsible party.”

Anyone with relevant information on this case may contact the Sector San Juan Command Center at 787-289-2041.