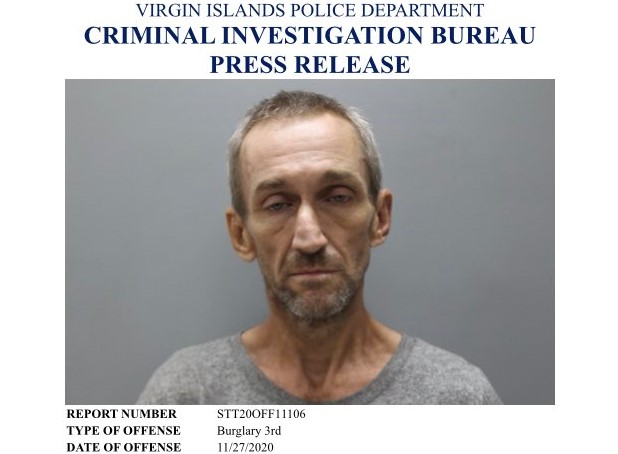 CHARLOTTE AMALIE — A report of a person burglarizing a sports bar on Main Street St. Thomas last Friday morning led police to a man who confessed to “several crimes all involving burglaries.”

The 911 Emergency Call Center dispatched officers to Sharky’s Sports Bar on Dronnigens Gade at 6 a.m. Wednesday, according to the VIPD.

“VIPD officers contacted the Criminal Investigation Bureau because they recognized the Caucasian male known as Vaughn who is known for burglaries in the town area,” police said. “The male who is known as Mr. Vaughn Lee Mchargue gave a confession to several crimes all involving burglaries.”

Acting on a tip, police caught up with Mchargue at the Tipsy Turtle located at the Veterans Drive Annex, where he was arrested.

According to Florida prison records, Mchargue was born on December 26, 1968. He was released from prison in 2018.