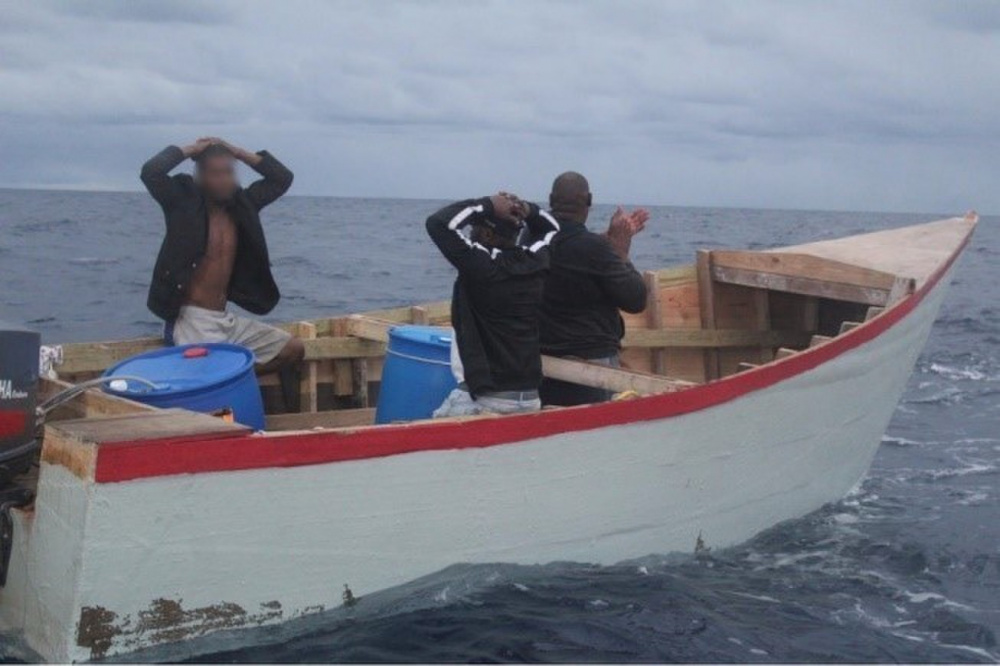 SAN JUAN — The crew of the Coast Guard Cutter Heriberto Hernandez transferred custody of a man wanted for an alleged murder to the U.S. Marshals in Mayaguez, Puerto Rico, following the interdiction of a makeshift vessel in Mona Passage waters near Puerto Rico.

Gustavo Guerrero-Reyes, 37, was arrested on an outstanding Puerto Rico state warrant, following his apprehension while traveling aboard a makeshift boat with two other men, whom all claimed to be Dominican Republic nationals.

The interdiction is the result of ongoing Caribbean Border Interagency Group multiagency efforts in their common goal of securing the borders of Puerto Rico against illegal threats.

“This case was complex and the crew of the cutter Heriberto Hernandez did an outstanding job interdicting this voyage and working with our partners from U.S. Customs and Border Protection (CBP) and the U.S. Marshals, which led to the apprehension of a wanted fugitive with a standing warrant for murder,” said Cmdr. Beau Powers, Sector San Juan chief of response. “This case is a testament to the professionalism of all interdicting agencies in securing and defending the United States’ southeastern border.”

Once on scene, the cutter’s Over the Horizon small boat launched and approached the suspect vessel.  The Coast Guard boat crew identified the 22-foot white colored makeshift vessel was of wooden construction, unseaworthy, and had no markings or indication of nationality.  The passengers onboard were also unable to provide a registration for the vessel.

The crew of the Heriberto Hernandez embarked the three men for Safety of Life at Sea concerns and conducted biometrics processing, which revealed one of the men wanted in connection to a murder allegedly committed in March 2020.

The CBIG unifies efforts of the U.S. Customs and Border Protection, the U.S. Coast Guard, U.S. Immigration and Customs Enforcement, the United States Attorney’s Office for the District of Puerto Rico and Puerto Rico Police Joint Forces of Rapid Action, in their common goal of securing the borders of Puerto Rico against illegal migrant and drug smuggling.