The Zoma, a 46-foot Danish flagged sailing vessel, and all its passengers, five Danish and three French nationals, including two minors, made it to safe harbor Monday morning in Ponce, Puerto Rico under the escort of Coast Guard Cutter Joseph Tezanos.

“I have the utmost pride in my crew’s performance and enthusiasm throughout this case,” said Lt. Anthony Orr, Coast Guard Cutter Joseph Tezanos commanding officer. “Throughout the challenging weather, the crew worked tirelessly throughout the night to control flooding aboard the sailing vessel Zoma, make her seaworthy and escort her to the best safe haven. The success of this case was only possible through the impeccable teamwork between the Joseph Tezanos, Sector San Juan’s Command Center and Air Station Borinquen. Despite being put to the test, there are few greater rewards in our profession than rescuing the lives of those eight mariners in harm’s way.”

Coast Guard watchstanders in Sector San Juan received a distress VHF-FM radio communication from the vessel Zoma at 9:53 a.m. Monday transmitted on Channel 16. The master of the Zoma reported the vessel was taking on water at a rate of 10 gallons per minute.

Coast Guard watchstanders directed the launch of a MH-65 Dolphin helicopter from Air Station Borinquen and diverted the cutter Joseph Tezanos to rendezvous with the vessel Zoma and provide rescue assistance. Watchstanders also transmitted an Emergency Group Calling communication to nearby vessel traffic capable of assisting. The Liberian-flagged tank ship Horizon Theano responded to the calling and escorted the sailing vessel Zoma while Coast Guard units arrived on scene.

Upon rendezvous with the vessel Zoma, the Coast Guard helicopter crew lowered their rescue swimmer and a dewatering pump to the sailing vessel. The rescue swimmer initiated pumping operations and worked with the vessel master, using rigid life jackets to inflatable paddleboards, to help contain the flooding.

The cutter Joseph Tezanos safely escorted the vessel Zoma to the Club Nautico in Ponce, Puerto Rico Tuesday morning, where Customs and Border Protection Officers assisted the survivors with humanitarian entry into the United States for the vessel to complete repairs.

Hazardous Dust Exposure In The Workplace 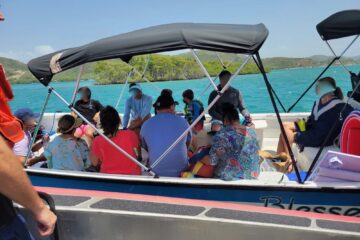