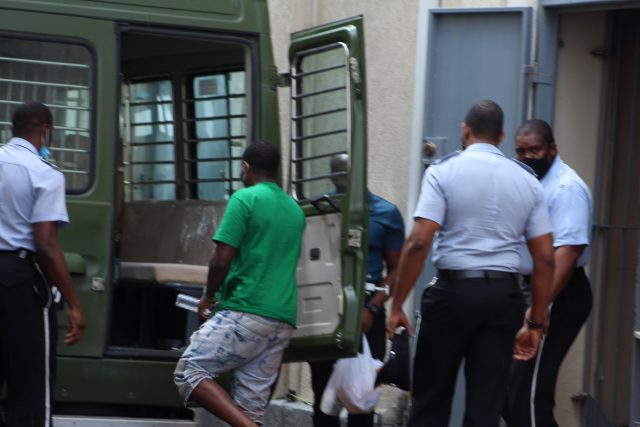 ROSEAU — A Dominica native who allegedly fled murder charges in the U.S. Virgin Islands five years ago, has been denied bail in his home country because the court said he posed “a flight risk” again.

Kennison Charles, of Grand Bay, Dominica, is fighting extradition to the territory on charges of first-degree murder and illegal gun possession, among several other charges.

Charles is wanted for the murder of another Dominica native Hans “Rastaman” Oliver in St. Thomas on March 26, 2016.

Some residents of Grand Bay have stood in solidarity with the wanted fugitive, marching through the streets holding placards that say he should not be extradited to the United States.

His defense attorney David Bruney tried to introduce three documents into evidence which included a “Standing in solidarity with Kennison” letter with the signatures of 254 residents of Grand Bay. It contained a letter which was addressed to the Prime Minister, Minister of National Security and the Attorney General, in which Charles fellow villagers pleaded with them to have the extradition requests barred.

But Director of Public Prosecutions (DPP) Evelina Baptiste objected to two of the three documents which Bruney tried to enter into evidence, saying that the documents were not taken under oath and could inherently prejudice the mind of the court. She added that the other letter was addressed to the Prime Minister, Minister of National Security and the Attorney General and should be sent to these individuals and not the court.

Bruney had argued in a bail hearing that Charles has been on his best behavior since absconding from the territory to avoid prosecution. He asked Magistrate Judge Pearl Williams to ignore his alleged criminal behavior in the territory — and grant him bail so that he has freedom of movement.

Charles was arrested in Grand Bay in February and has been living in Dominica for the last five years.

Charles is a permanent resident of the United States and Green Card holder. He appeared before Williams to hear the charges against him based on the fugitive-from-justice warrant issued for him by the United States.

Baptiste objected to bail for Charles, arguing that the charges against him are very “serious and akin to murder, manslaughter, grievous bodily harm [GBH] and assault occasioning GBH under the laws of Dominica and carry serious penalty.” Baptiste asked the court to “use its discretion in considering bail.”

Bruney countered that his client has lived in Dominica for the past five years peacefully and is a “model citizen.

“(Charles) is not a danger to the community and bail should be granted,” Bruney said. “The U.S. allegations are mere aberrations, the Americans have to do their work, I am concerned about the state of play in these charges, I am asking you not to penalize him for an alien outside state. He is a model citizen what we have is a blanket charge by the U.S. who is in turmoil.”

Dominica Magistrate Williams reached the decision to deny bail to Charles on February 24.