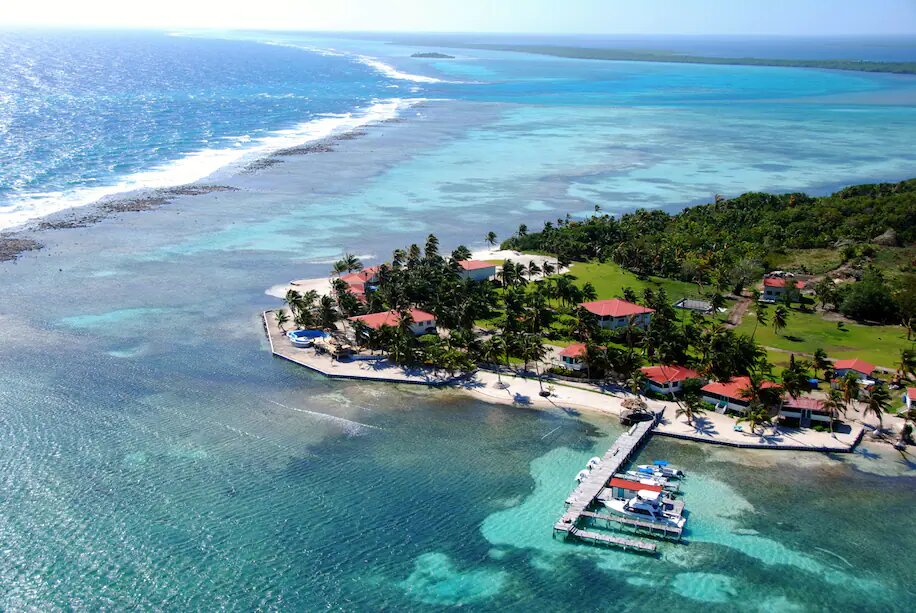 BELMOPAN — For some, the notion of an isolated, utterly private Caribbean atoll may conjure up fantasies of tropical indolence — chaise lounges on a white-sand beach, umbrella drinks and perhaps a paperback.

There are chaise longues and umbrella drinks available at Turneffe Flats. But most days the chairs are empty, as visitors come to explore the wonders of the most biologically diverse coral atoll in the Western Hemisphere by fly-fishing, scuba diving and snorkeling.

Turneffe Flats sits on Turneffe Atoll, a 300-square-mile series of hundreds of palm-fringed islands, endless mangroves, clear lagoons, and unbroken reefs — the very picture of pristine Caribbean beauty. It’s roughly 30 miles east of Belize City and is part of the Mesoamerican Reef System, the second-longest barrier reef in the world, stretching 600 miles from Mexico to Honduras.

According to Oceanic Society, the habitat here is home to more than 500 fish species and 65 stony corals, as well as manatees, saltwater crocodiles and many other animals that may be encountered during a day’s adventures.

“I’d started visiting an island named Caye Caulker in the late ’70s and had heard about this spot called Turneffe Atoll from local fishermen,” he recalled. “You had to cross some blue water to get there; the weather had to be right. We tried several times to go and eventually made it. We stayed in a lobster fishing shack.”

One of the fishermen he knew had a brother named Juni Marin, who had leased a piece of property on the atoll from the government. Around the same time, Sports Illustrated had run a story about bonefishing around Turneffe. So, Hayes, said, “We asked Juni if there were any bonefish around the property.”

“ ‘Oh yeah,’ he said. And he took us over to a spot called Grassy Caye, and we saw huge schools of bonefish. After that, we made a deal and formed a company. It was 1981.” Four years later, two bare-bones cabins were ready to welcome Turneffe Flat’s first angling guests.

Hayes’s background as a physician and lodge owner has been propitious. Last spring and summer, he worked closely with the Belizean prime minister’s office to draft coronavirus protocols for tourists, and the country’s pandemic travel response has been widely emulated. To enter Belize, visitors must present one of the following: a negative PCR test within 96 hours of travel, a negative rapid antigen test within 48 hours of travel, or a vaccination card documenting vaccination has been completed at least two weeks before arrival. All visitors must stay at a “Gold Standard”-certified resort; Turneffe Flats was the first property to receive the designation.

“The Belize International Airport reopened on October 1,” Hayes said. “We reopened shortly thereafter. Booking was slow initially, but the last few weeks in March we’ve been at full occupancy.”