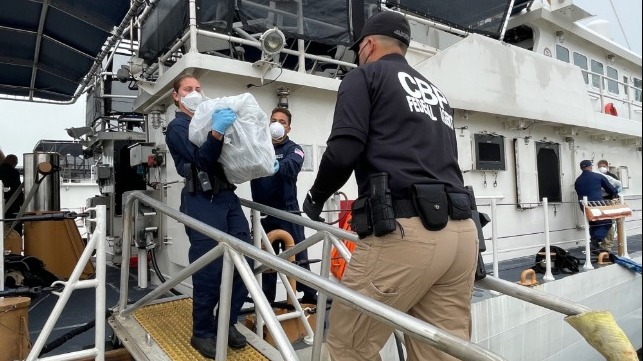 SAN JUAN — The U.S. Coast Guard said the crew of the cutter Joseph Tezanos offloaded nearly $15 million in seized cocaine and transferred custody of two male smugglers at Coast Guard Base San Juan, following the interdiction of a go-fast vessel in the Mona Passage waters in the Caribbean Sea near Mona Island, Puerto Rico.

“The interdiction resulted from multi-agency efforts in support of U.S. Southern Command’s enhanced counter-narcotics operations in the Western Hemisphere and coordination with the Caribbean Corridor Strike Force (CCSF),” the US Coast Guard said.

It said the United States Attorney’s Office for the District of Puerto Rico is leading the prosecution for this case.

It’s reported that the Coast Guard Cutter Joseph Tezanos, was operating in the vicinity when it was diverted and responded in hot pursuit to interdict the suspect vessel.

In total, the US Coast Guard said the crew seized 502 packages of cocaine with a combined weight of about 1,104 pounds.

“I directly attribute the success of this interdiction to the close interoperability that the Coast Guard has with CBP and my crew’s phenomenal performance during the pursuit, boarding and towing of the go-fast vessel,” said Lieutenant Anthony Orr, Cutter Joseph Tezanos commanding officer.

“Our agents will continue to use our advanced aeronautical and maritime capabilities to detect and interdict smuggling attempts throughout our coastal borders,” he added.

The Coast Guard said CCSF is a multi-agency Organized Crime Drug Enforcement Task Force group operating in the District of Puerto Rico focusing on Caribbean and South American-based Transnational Criminal Organizations involved in the maritime and air smuggling shipments of narcotics from Puerto Rico to the Continental US and in the laundering of drug proceeds using bulk cash smuggling and sophisticated laundering activities.