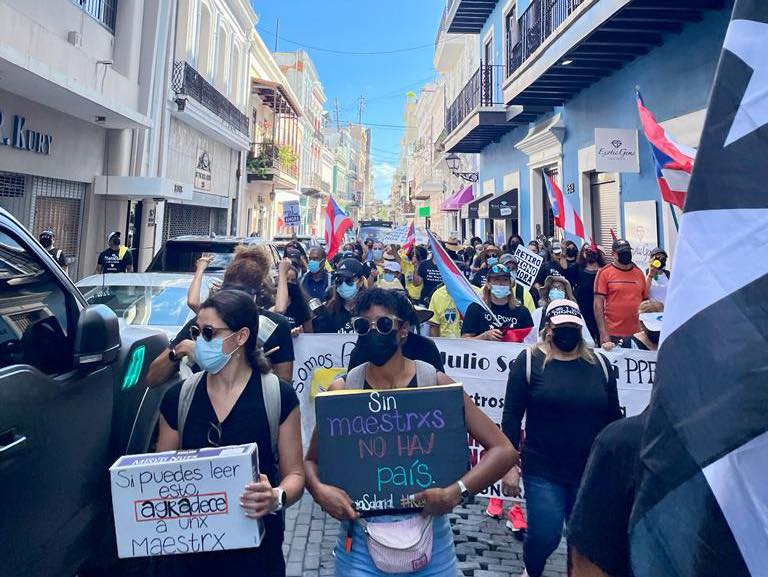 SAN JUAN — Puerto Rico’s governor announced Monday that all public school teachers will receive a temporary $1,000 monthly salary increase starting in July as he promised to make it permanent.

The move comes just days after 70 percent of teachers left their classrooms and joined a protest to demand higher wages, better pensions and improved working conditions. Another protest is scheduled for later this month.

“For years, we’ve truly been waiting for this moment,” said Víctor Bonilla, president of the Puerto Rico Teachers’ Association, which represents some 25,000 teachers.

The base salary of public school teachers in Puerto Rico is $1,750 a month, a number that hasn’t budged in 13 years. While some teachers praised Monday’s announcement, union leaders noted that they are still seeking a base salary of $3,500 a month.

Giovanna Ostolaza, who teaches 8th and 9th grade English at a school in the capital of San Juan, said it’s very hard to live on a teacher’s salary, especially for those who have families. She also worried that the governor might not come through on his promise to make the increase permanent.

“They have to prioritize education,” she said. “These are people essential to society.”

The teachers’ association and others had rejected a smaller wage increase recently approved by a federal control board overseeing Puerto Rico’s finances and the U.S. territory’s exit from bankruptcy.

Teachers would have seen an average increase of 27 percent compared with what they made in fiscal year 2019. They would receive half that increase on July 1, with the other half tied to them finishing a payroll and attendance system and providing for student attendance keeping.

Gov. Pedro Pierluisi said he had been looking for alternatives after the board rejected his proposal to increase teachers’ salaries by $1,000 a month. He added that the additional money will come from federal funds, specifically the Elementary and Secondary School Emergency Relief Fund. He said the use of those funds is temporary and will give his administration time to identify recurrent state funds to make the salary increase permanent.

Sybaris Morales Paniagua, interim general secretary for the teachers’ association, said they will make sure the increase is made permanent as part of a collective agreement still being negotiated and that they will continue to push for even higher wages. She said in a phone interview that the governor told them he also has identified funds to increase teachers’ defined contribution pension plans.