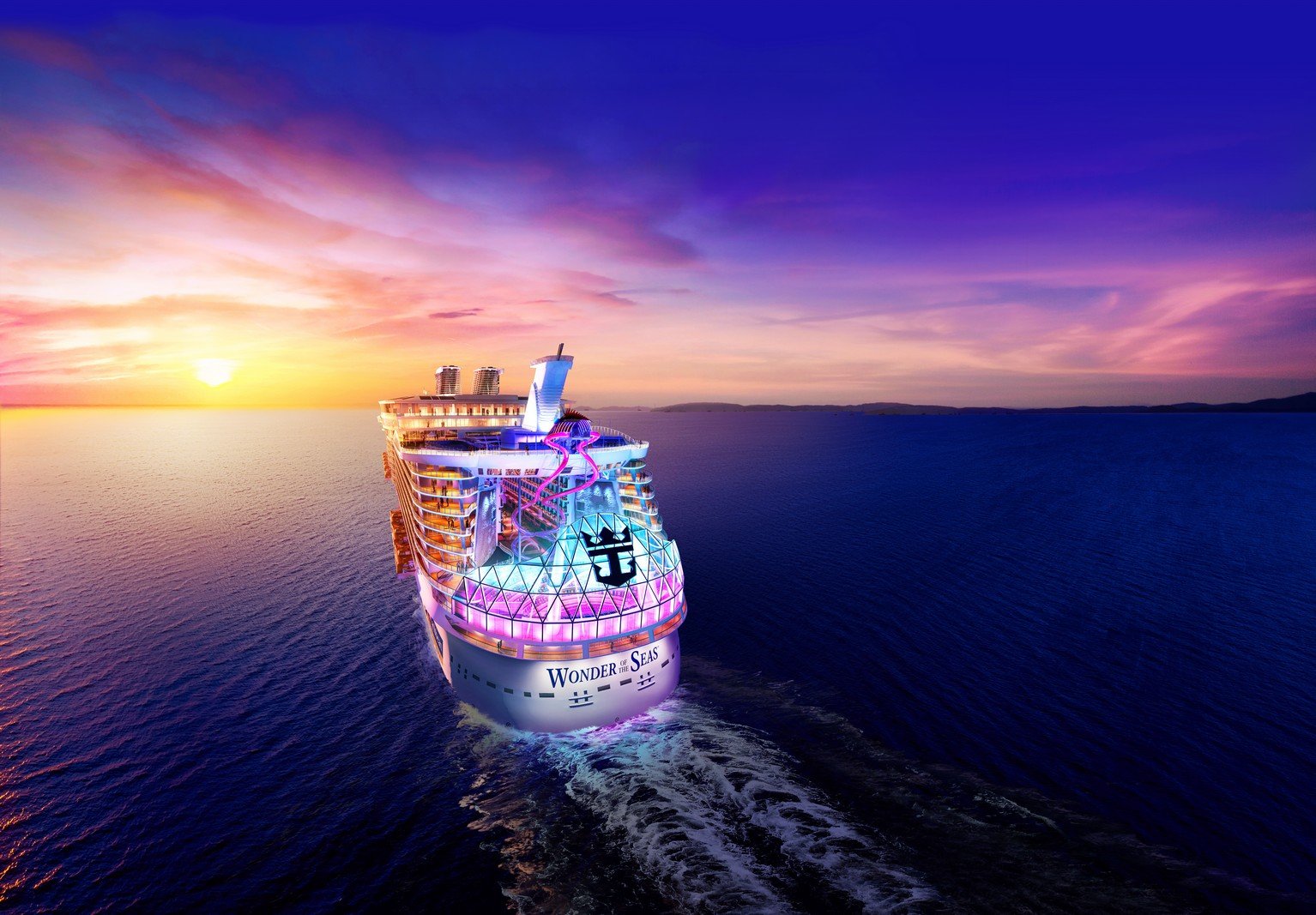 ORLANDO — And then there were five. Royal Caribbean took delivery of the latest of its fleet of world’s largest cruise ships, Wonder of the Seas, which is set to debut at Port Everglades on March 4 and tapped to move to Port Canaveral this fall. It will make its St. Thomas debut on March 22.

The original, Oasis of the Seas, is only seven feet shorter than her sister, Wonder, measuring 1,181 feet in length; and tips the scales at 226,832 gross tons, 10,025 less than her sister. Put in perspective, the difference accounts for just a little more than your average NBA player in length and nearly 2,000 African elephants.

Wonder of the Seas debuts four years after Symphony of the Seas, and has some new design features while keeping much of what has made its sister ships popular.

“Taking delivery of Wonder of the Seas is the culmination of 30 months of ingenuity and partnership across more than 2,000 committed crew members and workers who are among the best at what they do,” said Bayley. “Along with taking the revolutionary Oasis Class ships to a new level of wonder, innovation and adventure, Wonder sets the stage for the spring and summer vacations families and all travelers alike are looking forward to in the new year.”

The ship was handed over from officials with shipbuilder Chantiers de l’Atlantique to Royal Caribbean officials at a traditional flag-changing ceremony in Marseille, France, on Thursday.

Wonder of the Seas had its first steel cut in April 2019 with its keel-laying in October of that year. A sixth Oasis-class ship, also to be built at Chantiers de l’Atlantique, is slated to debut in 2024.

The company originally planned to send Wonder of the Seas to China, but shifted strategies during the COVID-19 pandemic shutdown. It’s now set to make its official debut from the Fort Lauderdale port in just over a month where it will sail into April on seven-night Eastern and Western Caribbean itineraries including stops at Royal’s private Bahamas island Perfect Day at CocoCay.

At the end of April, the ship will migrate back to Europe for voyages out of both Barcelona and Rome in the Mediterranean through October.

It will then return to the United States headed for year-round service from Port Canaveral beginning in November. It’s the first time the Orlando-area port will be getting an Oasis-class ship the same year that it debuted. Port Canaveral has hosted three of its sister ships and currently hosts Harmony of the Seas.

Unlike the other four ships in its class, Wonder of the Seas has one more neighborhood among its design for a total of eight with the introduction of the Suite Class Neighborhood. In it, suite guests will find an elevated Suite Sun Deck with a plunge pool, bar and loungers. The neighborhood is home to private dining experience Coastal Kitchen serving global dishes, plus the Suite Lounge. Dedicating a large space within the ship that’s exclusive to suite guests is a move similar to MSC Cruises and Norwegian Cruise Line.

For everyone on board, a new bar called The Vue offers panoramic vistas from above the pool deck, and at night features a colorful mosaic canopy.

On the top deck is the new Wonder Playscape, an open-air kids play area with slides, climbing walls, games, puzzles and an interactive mural activated by touch.

Similar to other Royal ships, the main pool deck received a Caribbean feel overlay that includes the multi-story bar The Lime & Coconut. Back again are the line’s three-waterslide design of The Perfect Storm, a kids waterpark called Splashaway Bay and several unique lounge spaces such as hammocks, in-pool loungers and mini covered casitas.

“Wonder of the Seas will energize cruising in a bolder and bigger way,” said cruise line parent company Royal Caribbean Group President and CEO Jason Liberty. “Adding this ship to our already best-in-class fleet elevates the company in continuing to lead the industry with new features and innovation.”