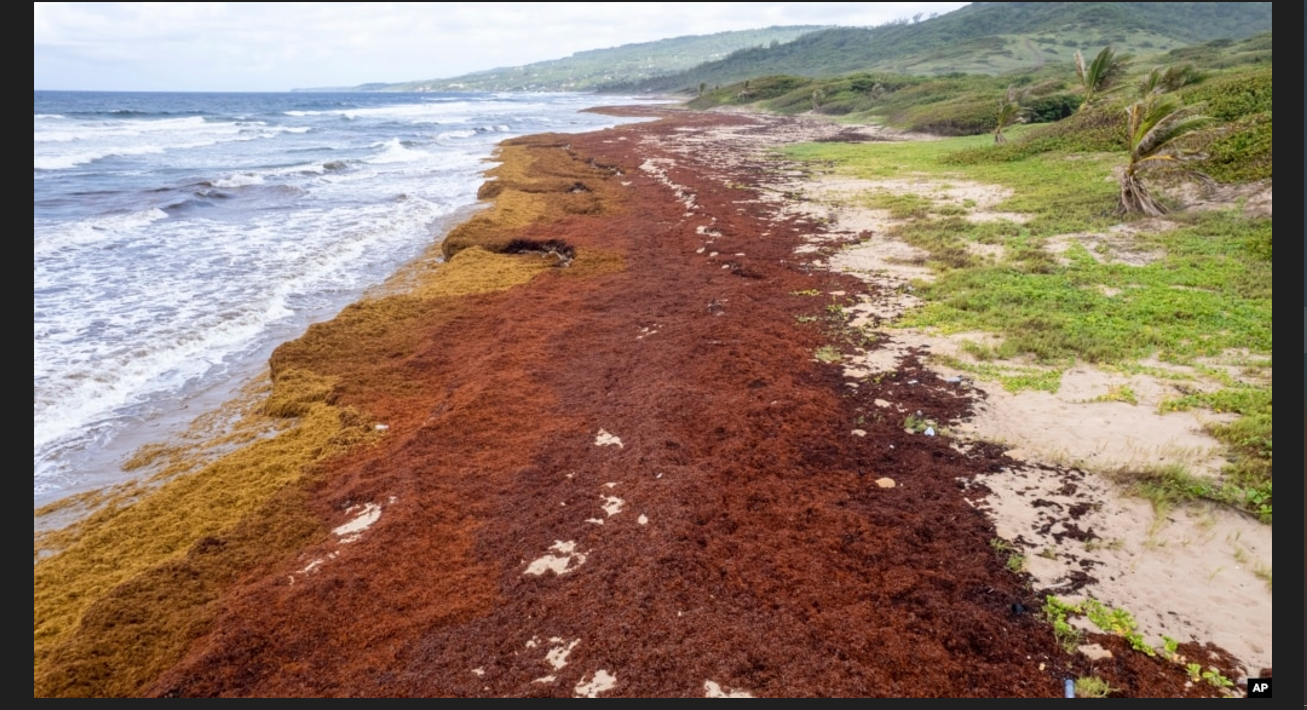 SAN JUAN — Near-record amounts of algae, or water plants, are covering Caribbean coasts from Puerto Rico to Barbados. The plants are killing fish and other wildlife, producing bad smells and gases, and hurting tourism.

The University of South Florida’s Optical Oceanography Lab said nearly 22 million metric tons of brown algae called sargassum appeared in the Atlantic Ocean in June. That was 20 percent more than the record set in 2018. And unusually large amounts of sargassum have floated into the Caribbean Sea.

Oswen Corbel is the owner of Caribbean Paddling. He said he had to close his St. Martin business on July 22 and does not expect to reopen until late October. He estimated he has lost at least $10,000. “Maybe I should give up. … Sometimes I think I should go into the mountains and herd sheep, but this is what I know to do,” he said.

The effects of overgrowth

The United Nations’ Caribbean Environment Program said some reasons for the overgrowth include a rise in water temperatures, chemical fertilizer and wastewater that feed the brown plants.

Lisa Krimsky is with Florida Sea Grant, a program working to protect the coast. She said as algae break down, they change water temperatures and the acidity of the water. In turn, that hurts other living things such as seagrass and corals.

The algae have hurt humans, too. The government of the French island of Guadeloupe issued a health alert in late July. It warned some communities about high levels of hydrogen sulfide gas escaping from the rotting algae. The gas, which smells like rotten eggs, can affect people with breathing problems.

Last month, the USVI warned of unusually high amounts of sargassum getting into the machinery at the Virgin Islands Water and Power Authority desalination plant near St. Croix. The Richmond plant is struggling to produce fresh water from seawater leading the U.S. government to declare an emergency due to water shortage.

Small amounts of sargassum help clean water and take in carbon dioxide. It is an important part of the natural environment for fish, turtles, shrimp, crabs and other creatures. It is also used in fertilizer, food, biofuel, building materials and medicinal products.

But it is bad for tourism and the environment when too much builds up near the coast or on beaches.

On Union Island, which is part of St. Vincent and the Grenadines, the algae invasion has recently forced some tourist areas to close for up to five months.

Large masses of sargassum also have hurt the Caribbean’s fishing industry. They damage boat engines and fishing equipment and prevent fishermen from reaching their vessels and fishing grounds. Fewer fish are caught. Barbados, where the beaches are covered with reddish-brown algae, has been hit especially hard.

Too much sargassum was thought to cause the recent deaths of thousands of fish in the French Caribbean island of Martinique. Activists are now worried about how it affects endangered turtles. Some are dying at sea while struggling to move through the algae. Some are unable to lay their eggs over the algae-covered sand.

Some island nations use heavy machinery to remove algae from the beach. But scientists warn that it causes erosion and may also destroy the nests of endangered turtles.