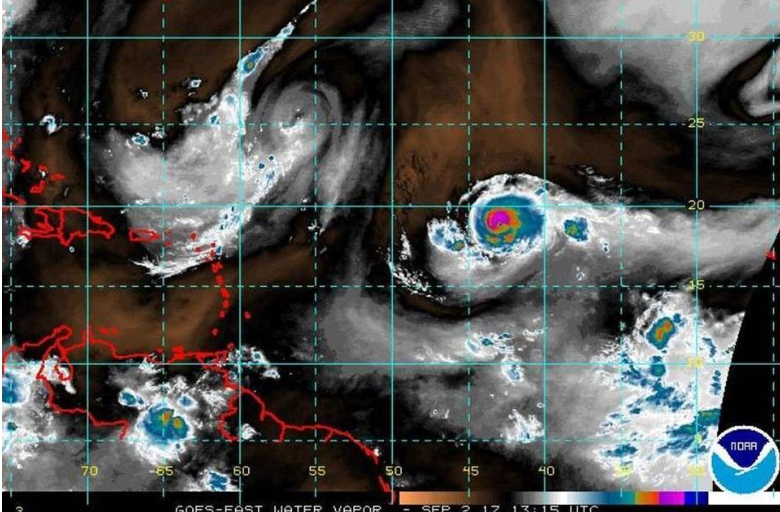 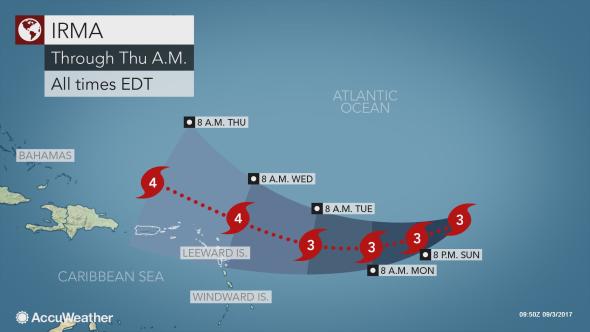 MIAMI — Monster Hurricane Irma dropped one degree in Latitude from 19.0 to 18.0 last night — an indication that the powerful Category 3 storm is now moving in a southwesterly direction — putting it more on track to affect the Virgin Islands and Puerto Rico sometime Wednesday when it is expected to be a “major” Category 4 storm.

NASA measured storm tops reaching at least 9.6 miles high on Friday morning and found that Irma is dropping rain on its northern side at a rate of almost 6.3 inches per hour. Forecasts have its top wind speeds at 140 mph by Wednesday morning.

But impacts to the American territories in the Caribbean from Irma remain a question as the storm churns in the central Atlantic.

Irma, currently a Category 3 hurricane, poses an imminent risk to the northernmost Leeward Islands. Preparations for the storm should already be taking place in these areas.

Meanwhile, Gov. Kenneth Mapp issued a statement Friday urging residents to begin making storm preparations such as removing debris from around their homes, putting up hurricane shutters and gathering needed supplies such as food and water.

“We do not believe at this time we’re in any jeopardy,” Mapp said. “September is historically an active time for hurricanes. There is no need to be anxious or fearful.”

Irma has fluctuated between a Category 2 and Category 3 hurricane.  The forecast still takes it toward the northeast islands by Wednesday, but the latest calls for a slightly weaker storm than previously predicted by the National Hurricane Center.

Irma has been fluctuating in intensity over the past few days, but is expected to strengthen to a Category 4 hurricane with sustained winds of 130-156 mph (209-251 km/h) on its closest approach to the islands.

The storm will turn to the north and west over the coming days. This track will put Antigua and Barbuda, Montserrat, St. Kitts and Nevis, Anguilla and the British Virgin Islands, in the brunt of the storm’s rain and wind spanning Wednesday and Thursday.

Power outages and damage to trees and structures are possible, even if the center of Irma misses the islands to the north because tropical storm force winds will extend out 140 miles in all directions.

Rainfall could be heavy enough to trigger flash flooding, mudslides and road washouts.

“Severe effects from the storm may be limited to a radius 50 miles (80 km) of the center, while the storm moves through the tropics,” AccuWeather Senior Meteorologist Alex Sosnowski said.

Rough surf will spread outward from the storm, leading to dangerous swimming and boating conditions along the east-facing beaches of the Lesser Antilles. Small craft should head to port and remain there until Irma has passed.

Cruise and shipping interests in the projected path of Irma should make plans to reroute.

During the middle and latter half of the week, Irma will move close to Puerto Rico and Hispaniola with the worst of the storm expected to miss the islands to the north. Even so, rough surf, gusty winds and downpours will increase.

“It’s still too early to say how close the hurricane will pass near the Virgin Islands, it’s still too early for that,” said Gabriel Lojero, meteorologist at the National Weather Service station in San Juan, Puerto Rico. “I think by Sunday through early next week we should have a much better idea as to the trajectory.” 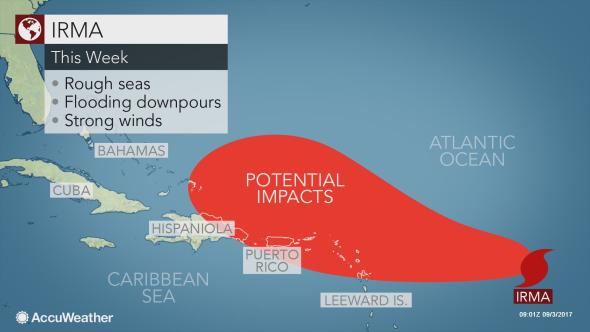 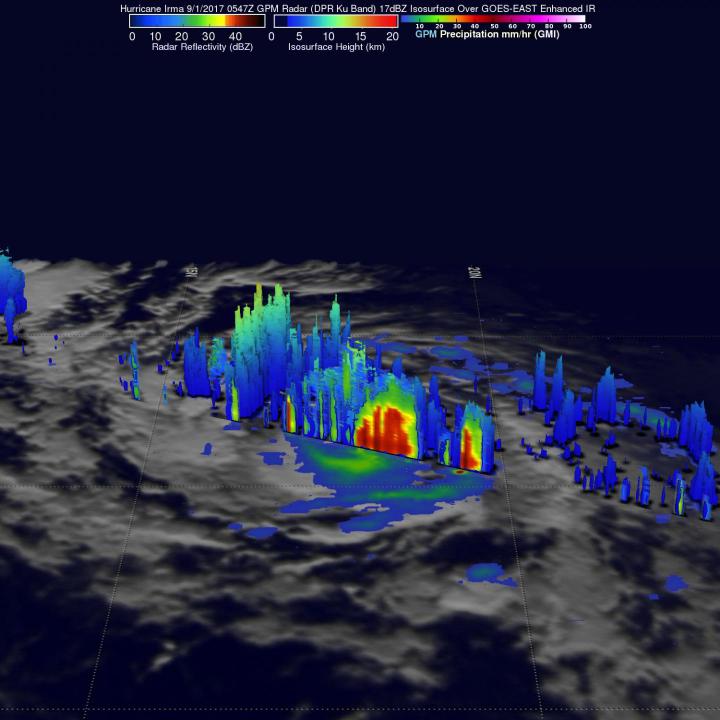 NASA MODEL: This core observatory image taken by NASA on Friday at 1:47 a.m. found that a band of rain on Hurricane Irma’s northern side was dropping rain at a rate of almost 6.3 inches per hour where storm tops were reaching heights of at least 9.6 miles. (A mile is 5,280 feet, so Irma has a height of 50,688 feet in places.)