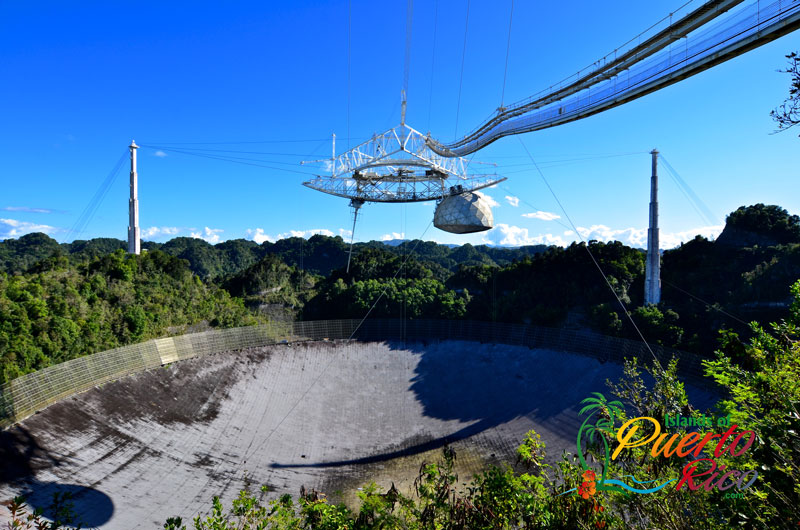 DISH WITH A VIEW: The director of the Arecibo Observatory, Francisco Cordova poses for a photo at the Observation Deck of the visitor’s Center of the Observatory in Arecibo, Puerto Rico on Oct. 16.

ARECIBO, Puerto Rico — While the vast majority of Puerto Ricans are living in a technologically deprived state without power and poor communications, there’s one high-tech oasis on the island that wasn’t blown back to the dark ages by Hurricane Maria.

The Arecibo Observatory, a massive radio telescope built in 1963, featured in films and nestled in the mountains of central Puerto Rico, was raked by the eye of the storm but survived almost unscathed.

Within seven days, the observatory was back up and running on generators — tracking pulsars and receiving data from the outer reaches of the galaxy — even as its staff (some of them now homeless) still couldn’t make a cell phone call to San Juan.

That the scientific complex survived the storm, and is using its resources to help in recovery efforts, is one of the few good news stories on an island in desperate need of them.

The heart of the observatory is a silvery 1,000-foot diameter dish that sits a valley and gives Arecibo bragging rights to being the largest operational single-dish radio telescope in the world. That title is being hotly contested, however, as China is currently running trials on a 1,650-foot diameter telescope that was built last year but isn’t considered fully operational just yet.

As Francisco Cordova, the observatory’s director, took a break recently from helping distribute aid, he admired the scale of the machine. It’s composed of more than 38,778 individual reflective panels that bounce radio waves from the cosmos at an array of antennae that hang 435 feet above the ground.

The whole contraption looks precarious, like a massive frisbee ready to be flung out to sea with a bit of wind.

“The structure is deceiving,” Cordova said. “When you see it at first it looks very fragile, but it’s actually very resistant.”

When Maria slammed into the installation on Sept. 20, packing 110-mph winds, the storm tore off a few panels and broke one of the complex’s two 430 megahertz radars. But the telescope was left fully operational.

Most non-scientists know the observatory from its star turns in Hollywood. The telescope played a central role in Contact, the 1997 movie based on a Carl Sagan novel and starring Jodi Foster.

In that film, the telescope receives communications from extraterrestrials 26 light-years away. In reality, in 1974, the telescope transmitted the “Arecibo Message” — a series of encoded pictures of our galaxy, man and the telescope — to the M13 star cluster 21,000 light-years away in hopes of engaging intelligent life. (That message is still has to travel some 20,957 years before it reaches its intended target.)

The dish played a sillier role in the James Bond movie Goldeneye (1995), where it appears to emerge from a lake in Cuba.
Go to mobile version