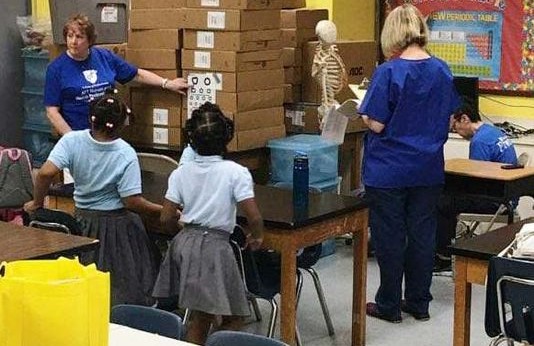 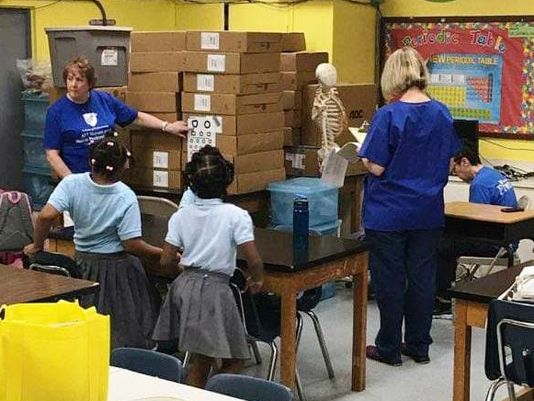 CHARLOTTE AMALIE — Two retired nurses from Wisconsin were part of a group of nurses who went down to the Virgin Islands to assist in testing the vision and hearing of school children affected by recent hurricanes.

One nurse, Jorja Doherty, worked at the Rocky Knoll Health Care Center for 39 years before retiring. Now a Cascade resident, she went down to St. Thomas along with fellow retired Wisconsin nurse Pat Geiger.

“I received a text on my phone that there was an urgent need for healthcare workers to do vision and hearing screenings in the Virgin Islands on school children,” said Doherty. “I thought this would be a great opportunity to donate some time to a good cause.”

It was Doherty’s first trip down to the region. She said the islands she and the group visited were beautiful and allowed her to experience a whole new world.

“They have a climate that is truly like paradise. Mid-80s, sunshine, not a lot of humidity, and such great beaches. I’m planning on going back for a vacation someday,” she said.

The group went down as part of an initiative by the American Federation of Teachers (AFT). Doherty and Geiger are part of their local affiliate, the Wisconsin Federation of Nurses and Health Professionals (WFNHP).

Jorja Doherty (L), Pat Geiger (R) and WFNHP president Candice Owley (C) before the women went down to the US Virgin Islands to help screen children for hearing and vision impairments. (Photo: Courtesy of the Wisconsin Federation of Nurses and Health Professionals)

“We represent school nurses in the U.S. Virgin Islands both in St. Thomas and St. Croix,” said WFNHP president Candice Owley. “Our national union had been in contact with them (following the hurricanes) to just see how things were going and if there was any way we could help them.”

The nurses in St. Croix and St. Thomas said they needed help with vision and hearing screenings of schoolchildren.

The WFNHP sent down four nurses including Doherty and Geiger.

A total of 30 nurses nationwide went down to St. Thomas and St. Croix in April. They stayed for 10 days and were able to screen the vision and hearing of over 10,000 school children from elementary school to high school.

“We were bussed to different schools. Our particular job, for Pat and I, was to do vision screenings with the school age children,” said Doherty. “We had to meet with the people from the school and it was mainly the school nurses down there that helped our leaders develop a place to go because a lot of the schools were condemned.”

Doherty said one of the best parts of the trip were the children and the people.

“The kids were beautiful. They were wonderful to work with. They were all so cute,” she said. “The people of St. Thomas, not only the people that we worked with and the children, but even the people we met in town were so friendly.”

She said all the nurses kept very rigorous documentation of the students that had vision and hearing impairments. School officials called the parents of the students whose vision or hearing was severely impaired.

Their documentation work is only phase one, however.

“The next step is that we will be working to get the children that do have impairments glasses and hearing aids if needed,” Owley said. “Right away, they found kids that really need glasses but just didn’t have the resources.”

Owley said the union is currently discussing the logistics of getting the schoolchildren the resources they need. With many hearing impaired students needing something similar to hearing amplifiers and other audio and visual aids.

Doherty said an important thing she took from the trip was that the islands are still in need of assistance as a whole, even months after the hurricanes.

“It’s a different culture that we don’t think about and we have a tendency to think that it won’t happen to us. We don’t understand the problems that these people endure after that,” she said.

Hurricanes Irma and Maria were Category 5 hurricanes that killed at least 100 people in the United States and its territories like the Virgin Islands and Puerto Rico. The 2017 hurricane season was one of the worst in recent seasons, according to a report by USA TODAY. Thousands of people are still without power in Puerto Rico.

Owley said it was a common sentiment from others who went down to assist.

“These islands, everybody thinks of them as great places to vacation, but they forget that there was tremendous devastation and still a great need for help,” she said. “We pay a lot more attention, sad to say, to what happens in Texas or what happens in Florida. These are U.S. territories, just like Puerto Rico, that need a tremendous amount of help.”

Doherty said she felt compelled to help after hearing about the damage done and the lack of bodies there to help.

“It’s just kind of what nurses do. We make a professional commitment to care for those that are in need,” she said. 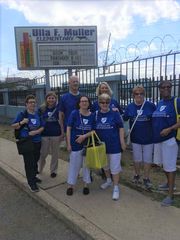 Part of the group that went down to St. Thomas and St. Croix to screen school children for hearing and vision impairments. (Photo: Courtesy of the Wisconsin Federation of Nurses and Health Professionals)