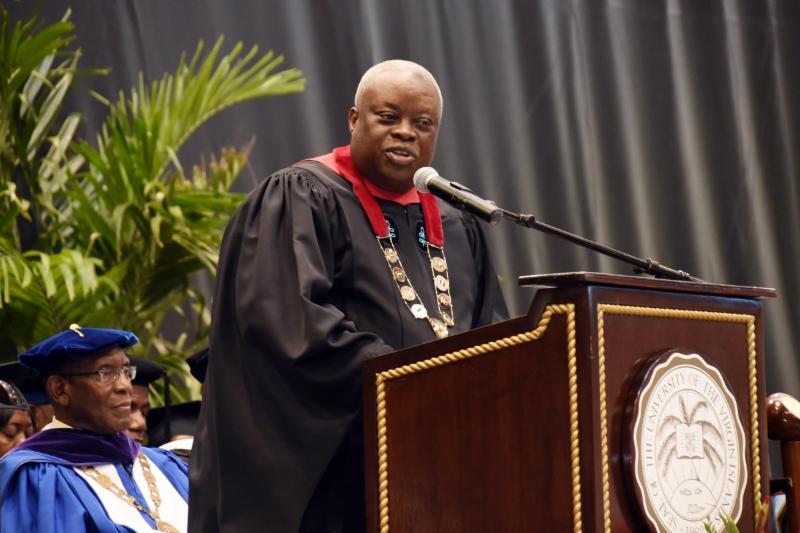 Two gubernatorial candidates have expressed publicly their support for legislation to give free tuition to every high school graduate in the U.S. Virgin Islands who wants to attend the University of the Virgin Islands. As the mother of two sons who graduated from college in recent years and who assisted with paying their college tuition, I can understand the desire of both parents and students to have free tuition to attend UVI. However, now is not the time to consider adding another financial obligation on the Government of the Virgin Islands when we are
suffering from a crumbling infrastructure and huge government debt.

According to the Governor’s proposal, $3 million would be set aside annually to fund a scholarship program for up to 1,700 V.I. undergraduate students from the rum cover-over funds. UVI would raise the balance of any money needed. According to the Bryan/Roach gubernatorial team, their plan would have the government pay for all tuition costs which they estimated would be $3 million. They tout that money can be moved from the budget for the Bureau of Corrections to UVI’s budget to cover that cost.

The reported debt of the government hovers around $2 billion, not million! Our infrastructure has deteriorated significantly. Our roads are filled with potholes and many are dangerous to motorists as potholes have grown to become craters while some roads are caving in. Our hospitals are in a state of disarray. Our public schools’ structures are deteriorating.

WAPA is owed about $33 million by the government. Its CEO Lawrence Kupfer recently testified before the Senate that it would likely have to seek rate increases to cover its 2019 budget shortfall of $45 million. Our Government Employees Retirement System has an unfunded liability of $2.8 billion and will soon collapse if the government does not regularly pay current contributions and have funds to pay the unfunded liability. Many vendors and contractors, especially those who have provided services since the hurricanes, have complained about not being paid by the government. Some National Guard service members still report that monies are owed to them for their services after the hurricanes.

Additionally, the Bureau of Corrections is one of the V.I. government agencies that continues to be under a court-imposed consent decree due to many grave problems that rose to the level of violating inmates’ constitutional rights,
including the lack of mental health care, shortages of prison guards, and significant structural deficiencies in the facilities. In fact, the lawsuit brought by the American Civil Liberties Union in the 1980s and the resultant consent decree are still unresolved. And, there are many more pending court-imposed consent decrees against government agencies that have yet to be resolved, including one with the V.I. Police Department. Of course, what is a common excuse for the government’s continued non-compliance? The government does not have the money!

Now is not the time to be adding yet another financial obligation on our burden-plagued government. The focus should be on generating revenues to pay down existing debts and stop the waste, misuse and abuse of public funds.
Furthermore, immediate attention needs to be given to improving our healthcare system, roads, GERS, and WAPA for example. Moreover, we need to implement an educational plan with long-term solutions to better prepare our children for the 21st century workforce, whether it be to attend college or to learn a career and technical skill.

The bottom line is that finding ways to spend money is easy – the difficulties are using wisely the money we have now to pay for our critical needs, finding ways that will actually generate revenues to fund our critical needs, and refraining from adding new spending initiatives until the government debt is under control. Election day is around the corner and the voting public must be astute as to what is being told to them now to win votes.

1 thought on “OP-ED: Now Is Not the Time To Add Further Financial Obligations to Government”