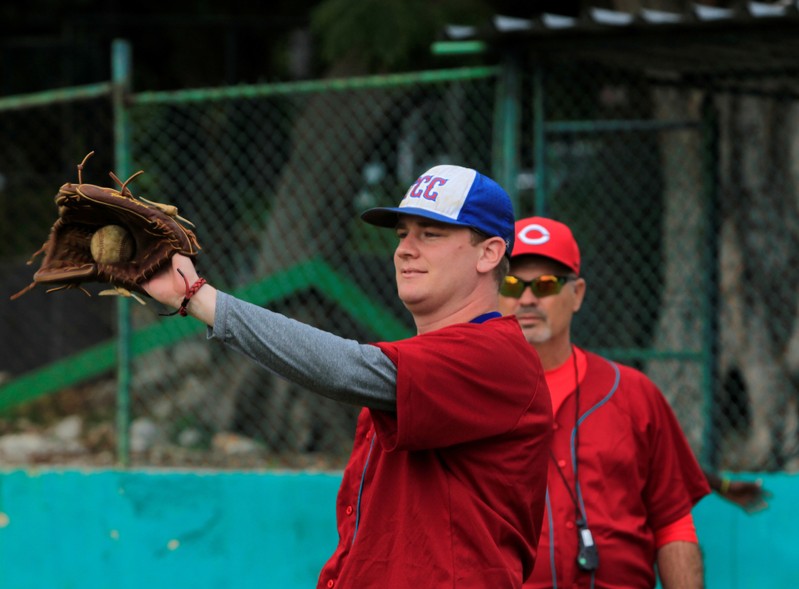 HAVANA — A 24-year-old student has become the first United States citizen to play in an official Cuban league in around six decades, just as Cubans are batting for Major League Baseball without having to defect under a historic deal made in December.

U.S.-Cuban relations have chilled as U.S. President Donald Trump turned to Cold War characterisations of the communist-run island, but one would not know from the camaraderie on the baseball field.

As a kid, Matthew McLaughlin dreamed of playing for the Boston Red Sox. That dream took a surprising turn when he moved to the largest Caribbean island in 2014 to study Spanish after graduating with a bachelor’s degree.

“When I came down to Cuba I realized that my dream was never to play for the Boston Red Sox; it was to pitch for the (Havana team) Industriales,” said the blond and burly McLaughlin on a sun-parched baseball field in Havana. Industriales is the most successful team in the Cuban National Series.

After introducing himself to the manager of Plaza, which plays in Havana’s provincial league, the 6-foot-1, 195-pound pitcher started to train with the team and last year officially became a member.

“I’m the first American to come down to Cuba and play organised baseball in 60 years of the national or provincial series in Cuba,” he said, shielding his eyes from the tropical glare with the blue Plaza cap shortly before a game.

U.S. citizens and Cubans used to play in their respective countries’ leagues before Fidel Castro’s 1959 revolution. The official exchange ended after Castro abolished professional sports and installed a communist state just 90 miles south of Florida, prompting Washington to declare a trade and travel embargo on Cuba.

After the 2014 detente under former presidents Barack Obama and Raul Castro, sporting and cultural exchanges flourished despite a tightening of the embargo under Trump. In December, Major League Baseball reached a historic agreement with the Cuban Baseball Federation allowing Cuban players to sign with U.S. teams without needing to defect.

Cuban baseball has waned in recent decades as the country’s finances have deteriorated and its stadiums have fallen into disrepair. Many players earning less than US$100 per month have defected to the United States where they have signed multi-million dollar contracts.

That baseball is an amateur sport on the island does not faze McLaughlin who, after four years there, speaks with the local accent, swallowing consonants, and uses Cuban slang like “asere” (buddy).

For him, Cuba is a great talent incubator, underscored by the many players have become stars in the top U.S. leagues, such as Yasiel Puig of the Los Angeles Dodgers and Jose Dariel Abreu of the Chicago White Sox.

Plaza’s manager Lazaro de la Torre said he took on McLaughlin for his dedication and chemistry with the team.

“Matthew’s one more Cuban here,” he said. “And if he does well in the provincial league, the door is open for the Industriales.”