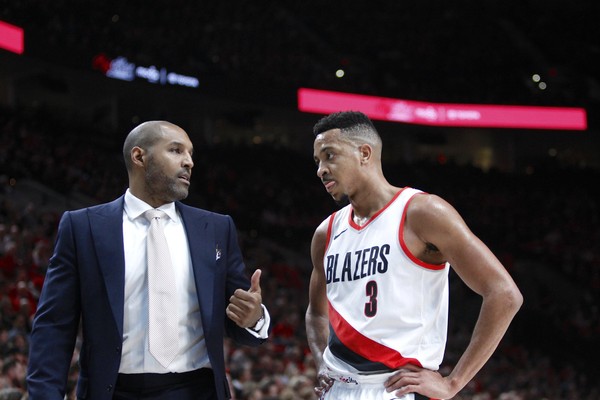 MEMPHIS — David Vanterpool of St. Thomas is being considered for the head coaching position of at least three NBA teams.

Vanterpool, 46, has been on staff of the Portland Trail Blazers since 2012, will be interviewed by the New Orleans Pelicans, the Cleveland Cavaliers and the Memphis Grizzlies.

The Virgin Islander is a “hot name” in the assistant coaching ranks of the NBA, according to the Memphis Commercial Appeal.

But if Vanterpool is to get to top coaching position in Tennessee, he will have to overcome a trend the team has had since it moved from Vancouver, Canada in 1995 — they mostly hire “seasoned” coaches.

As the Grizzlies search for their ninth head coach since the team’s move to Tennessee and their fifth since owner Robert Pera acquired the team in 2012, a trend stands out when reviewing the franchise’s coaching history.

The only coaches who have led the Grizzlies to the playoffs after non-playoff seasons were 55 or older when hired.

Franchise leadership consisting of then-owner Michael Heisley and then-general manager Jerry West shocked the basketball universe by hiring Hubie Brown, then 69, to coach the team early in the 2002-03 season.

Brown, who had not coached in 15 years and was working as a TV analyst, took over an 0-8 team and led it to the best record in franchise history at the time.

He took the Grizzlies to their first-ever playoffs the following season, earning 2003-04 NBA coach of the year honors as he did.

A few years later, with the Grizzlies sporting an 11-33 record midway through the 2008-09 season amid a playoff drought, Heisley and then-general manager Chris Wallace hired 55-year-old Lionel Hollins away from an assistant coaching role with the Milwaukee Bucks to take the head job in Memphis.

He led the team to a first-round playoff upset of top-seeded San Antonio in 2010-11 after a four-year playoff drought.

“I was young and dumb and I was like, ‘we hired the TNT guy,’” Watson said.

The Grizzlies had finished 23-59 during their first season in Memphis, which followed a dismal six-year run in Vancouver.

“It was a losing culture in Memphis,” Watson said as he described a young Grizzlies core that “just didn’t know who we were.”

Brown, who was the oldest coach in the NBA, entered and immediately changed the culture.

“He was like, ‘we’re going to have two-a-days for the next week,’” Watson recalled. “We were ten games in to the season.”

Brown told the Grizzlies that ten of them would love him and three of them would hate him, a reference to the 10-man rotation he dutifully employed as a coach.

“He walked out of the locker room,” Watson said. “Everyone lingered and the locker room and we were like, ‘yo, this dude is evil.’ And he was the best coach I ever had in my life.”

“All I know is the whole team is going to miss Coach Brown,” center Lorenzen Wright said.

Mike Fratello, then 57, took over for Brown and led the Grizzlies to two more playoff appearances.

After an 11-30 start to the 2008-09 season that led to Marc Iavaroni’s firing, Heisley and then-general manager Chris Wallace hired Hollins mid-season from an assistant coaching position with Milwaukee.

Some believed Hollins deserved to be named head coach when Brown resigned a few years before. At the time, Hollins was in his second stint as an assistant with the franchise. He served as interim head coach for four games before Fratello entered.

But Fratello retained Hollins as an assistant, and when Hollins finally got his chance to lead the team in 2009, he built on the success he’d helped create while on staff under Brown and Fratello.

“He’s a tough-minded coach. He’s a no-tolerance coach. He’s confrontational,” Tony Allen recalled of Hollins in a 2015 Commercial Appeal article. “He wouldn’t mind getting in your grill. He’s one of those coaches who will tell you about yourself instantly. And he wouldn’t be shy about telling you in front of everybody. But at the same time he’s encouraging and he’s a motivator.”

The Grizzlies won their first playoff series ever under Hollins’ direction in 2011 and won a franchise-record 56 games in a 2012-13 season that ended in the Western Conference Finals. Ultimately, that was his final season as coach after a successful four-and-a-half year run.

“You have to look at it as a whole in terms of what coach has done for this team and this city,” Marc Gasol said before the team’s final playoff run under Hollins. “He’s changed the whole mentality and the culture as far as professional basketball. You have to give him the credit. The team has improved every year. And every member of the core group has grown because our coach keeps pushing us to do more. I don’t see myself playing for another coach. I just don’t see it.”

Lowe coached the Grizzlies through the transition from Vancouver to Memphis. He resigned after an 0-8 start to the 2002-03 season.

Brown took over for Lowe, guided the team to a 28-46 finish and set the stage for the team’s first-ever playoff appearance the following season. Memphis went 50-32 in Brown’s only full season as coach in 2003-04 as Brown won NBA coach of the year. Brown resigned after a 5-7 start to the 2004-05 season, citing health reasons.

Fratello took over for Brown and led the team to consecutive playoff appearances. The Grizzlies fired Fratello after a 6-24 start to the 2006-07 season. He left with the best winning percentage of any coach in franchise history.

Iavaroni coached the Grizzlies through the trade of Pau Gasol, Mike Conley’s rookie year and the first half of Marc Gasol’s rookie year before he was dismissed after an 11-30 start to the 2008-09 season.

With attendance dwindling amid poor play and a national economic downturn, Hollins took over for the second half of the 2008-09 season with uncertainty swirling over Conley’s ability to be a starter – much less a star – in the NBA. Hollins led the team to a 13-26 finish to the season. With Zach Randolph added to the roster, Memphis improved to 40-42 in 2009-10 before the true birth of the “Grit and Grind” era. The Grizzlies went 143-103 in Hollins’ final three season as coach.

After six years on the Grizzlies’ staff, Joerger took over for Hollins and inherited a franchise-record 56-win team. He led the Grizzlies to consecutive 50-win seasons but was fired after the injury-depleted Grizzlies lost a first-round playoff series to the Spurs 4-0 in 2016.

The Grizzlies exited February with a 36-25 record in Fizdale’s only full season. But with Chandler Parsons unable to provide consistent contributions amid persistent knee issues in the first year of his contract, Memphis struggled with depth issues all year and lost in the first round of the playoffs. The Grizzlies fired Fizdale after he and Gasol clashed during a 7-12 start to the 2017-18 season.

Record (not including interim period): 48-97

Named interim coach after Fizdale’s firing, Bickerstaff took over a roster playing without Mike Conley. With Allen and Randolph no longer part of the roster, the Grizzlies struggled to a 22-60 record, their worst in a decade. The Grizzlies named Bickerstaff the full-time head coach after the season. He led the team to a 12-5 start this year, but the season took a hard downturn. After a flurry of trades and amid mounting injuries, the Grizzlies went 7-7 in March. But a 33-49 overall record left franchise leadership unimpressed. Bickerstaff was fired last week.