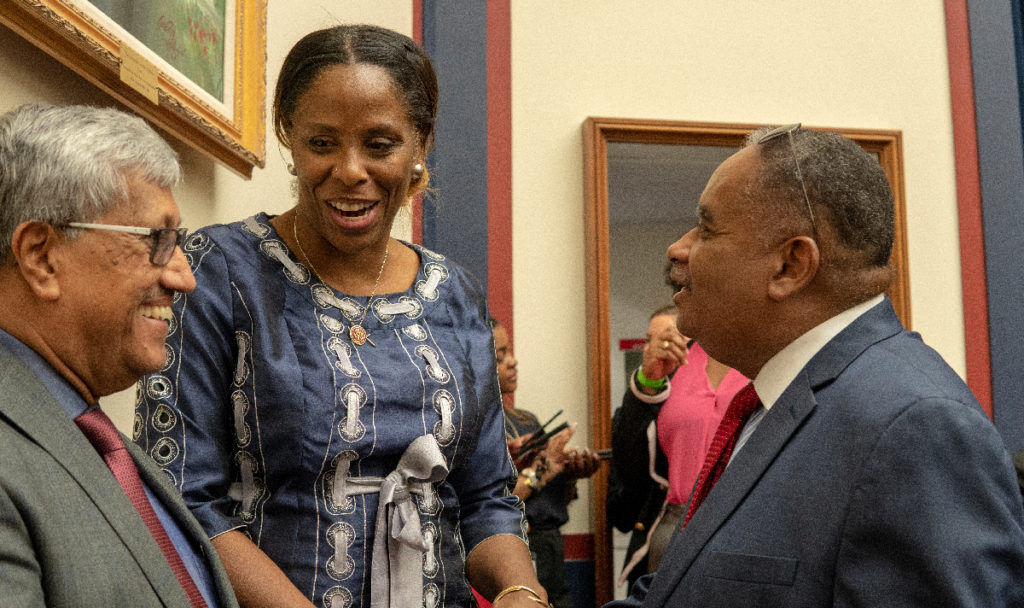 WASHINGTON — Komal Samaroo, a leading Caribbean business personality, wants the Caribbean region to be better positioned to benefit from its trading relations with the United States through the removal of trade barriers and expanded American investment in the region.

Komal Samaroo, chairman of the West Indies Rum and Spirits Producers Association (WIRSPA) and Guyana’s Demerara Distillers Limited (DDL) also wants the U.S. to reallocate sugar quotas from non- producing sugar countries in the region which are not being used to those that produce sugar.

He was at the time delivering the keynote address at a working lunch on Capitol Hill earlier this week at the Caribbean Legislative Forum.

Allow me at the outset to thank the Institute of Caribbean Studies (ICS) for inviting me to participate in this year’s Legislative Week activities and more specifically to be a part of the deliberations at this Legislative Forum.

Having participated so far in just the morning session of this Forum I am already impressed with the quality of the discussion and the exchange of ideas which have been put forward to address the challenges and to strengthen the relations between the Caribbean Region and the United States.

So against this backdrop let me congratulate the ICS for the work it has been doing over the years to advance the cause of the Caribbean and its Diaspora in the US and to forge initiatives designed to bring about a better quality of life for the people of the Caribbean.

The support which you have received over the years from Friends of the Caribbean in the US Congress must also be acknowledged and appreciated.

Your efforts are even more necessary now with the closure of Caribbean Central American Action (CCAA) last year and I would suggest that ICS seeks to engage both the regional and US private sector more aggressively with a view to more effective collaboration in addressing the challenges which confront the US/Caribbean relationship at this time and in the future.

The United States characterizes the Caribbean as its Third Border

According to its Caribbean 2020 Multi-Year Strategy “The Caribbean region is the United States’ “third border,” characterized by common interests and societal ties that yield daily, tangible benefits for U.S. citizens.

This vibrant economic partnership however requires that the Caribbean region is better positioned to take advantage of its potential share of this vibrance through the removal of existing barriers to market access in the US as well as expanded US investment and technology transfer in the region.

As we are gathered for lunch it is probably apposite to reflect for a moment or two how our dietary habits change over time and the economic impact of such changes on the lives of people.

In this regard, let me quote from the work of Elizabeth Abbott, the former Dean of Women at Trinity College, University of Toronto, writing about 17th century England in her 2008 book – SUGAR – A Bittersweet History –

“In their former agrarian life, most laborers have had access to gardens where they grow vegetables and fruits and perhaps raise poultry or even a cow. In the cities and even rural areas affected by the enclosure laws, workers had to purchase their food and they often changed their diets in response to costs and availability. For the first time, they had access to non-European foodstuffs previously restricted to the privileged, and soon potatoes, rice, maize, tea, coffee, chocolate, sugar and tobacco were staples in the English diet…

“By 1700, the percentage of imported foodstuffs, notably tea, coffee and sugar had doubled from 16.9 percent to 34.9 percent with brown sugar and molasses the most popular.”

She quoted sugar historian Noel Deerr who “estimates that per capita sugar consumption was four pounds in 1700, eight pounds by 1729, twelve pounds by 1789, the year of the French Revolution, and 18 pounds by 1809”

The market dynamics described by Elizabeth Abbott, shaped the history and the economy of the Caribbean for centuries, as the region’s climatic condition was naturally ideal for the production of sugar.

Tin order to meet market demand for sugar the region was populated with laborers who were brought from Europe, Africa and Asia, under the system of slavery and later indentureship, and their descendants today make up most of the population.

In recognition of its importance to the region, sugar was the subject of special trade arrangements until just over a decade ago (2006) when the EU Sugar Protocol.

The USA imports sugar on a duty -free basis from the Caribbean countries under the tariff-rate quotas established in 1990 by the Farm Bill.

The tariff rate quota announced by the USTR for 2019 for individual countries included 7,371 tons for Trinidad & Tobago and 7,258 tons for St Kitts & Nevis. Interestingly, these countries have ceased sugar production quite some time ago.

A case could be made to reallocate these quotas to countries in the region, which are still producing sugar.

This is particularly relevant in light of the movement towards a Caricom Single Market and Economy that will eventually allow for free movement of people within the Region.

Today, I take this opportunity to urge the United States, through its Members of Congress and officials of the Executive Branch to work with the CARICOM region to have these country specific tariff quotas transferred into a regional quota.

Perhaps the most lasting impact of the sugar industry in the Caribbean was the creation of the regional Rum Industry.

For over three centuries the region has been producing rum from the molasses by-product of sugar production shipping Bulk rum to Europe where it was bottled branded and sold. From 1745, for 225 years, rum was served as part of a daily ration to the men who served on the British Royal Navy, until that practice ended on 31st July 1970.

From 1975 to 2000 the Caribbean exported rum to the EU under the Rum Protocol of the Lome’ Convention, a trade and aid agreement between the European Union and the African Caribbean and Pacific states.

In addition, from January 1st1984, under the Caribbean Basin Economic Recovery Act (CBERA), rum from the region benefited from duty free access to the US market. We support the extension of CBERA.

It enabled our initial market access into the US and continues to provide a valuable preference against third country low value products, which often originate in countries where the raw material inputs are subsidized, leading to artificially low product pricing.

The US Rum Market is dominated by supplies from USVI and Puerto Rico to the extent of about 80% of total market as these territories benefit from the Rum Excise Tax Cover-Over that provided for generous support and subsidies.

The outlook of Caribbean rum brands in the US market continues to be a challenging one. Our strategy is directed at the premium and super premium segment of the market and this is where there has been some success. But these segments are small and still developing requiring significant investment to keep it growing.

As a whole, however, our total branded volume has not grown substantially over the past decade and our bulk rum business, so important in financing our brand building, has plummeted in the face of tremendously subsidized products.

In addition, there is a plethora of new brands entering the market, some with very dubious provenance. We also see a dramatic increase in the trade of ethyl alcohol and worry that this is finding its way into rum in violation of international trade rules.

Our response to these challenges has been to present ourselves as quality premium products. Our products have authentic provenance, they are fermented and distilled in the country of Origin and we follow common rules and regulations as to what can be called rum.

Rum has become the region’s largest agriculture- based export earner, in the face of significant reduction in earnings from sugar which has been facing major marketing and production challenges.

For example, in Guyana based on information in the 2018 Central Bank report, while in 2016 export earnings from sugar was two times that of rum, in 2018 sugar earned only 56% of what the rum industry earned from exports.

There is, of course, the need to broaden the base on the regional economy. The agriculture potential must be fully exploited, and investments made in agro-processing so as to move higher up the value chain. Similar strategies must be pursued in the forestry and mineral sectors.

The newly emerging Oil and Gas industry in Guyana would most certainly provide an increased revenue stream, which once well managed can help to create a competitive environment for the other sectors of the economy to develop in a sustainable manner, becoming globally competitive, and contributing to growth and improvement in the quality of life of its people.

During the course of the morning’s deliberations we heard of the challenges posed to the banking sector in the region brought on by de-risking of correspondent banking arrangements.

The challenges occasioned by de-risking have had an enormously negative impact on the Caribbean business community.

Speaking from a private sector perspective I urge that the US works with our regional governments to speedily find a lasting solution to this problem.

Once again, I want to thank the organizers of this luncheon on the occasion of the 21stAnnual Caribbean American Legislative Briefing and for the opportunity to have shared my perspective on issues that are close to me.

I strongly believe that with the mechanisms and arrangements already in place such as an extended CBERA and TPA; the U.S. Caribbean Strategic Engagement Act and the Caribbean 2020 Multi-Year Strategy, there exists the platform to overcome the challenges and to strengthen the economic and social relations between the U.S. and the Caribbean for our mutual benefit.