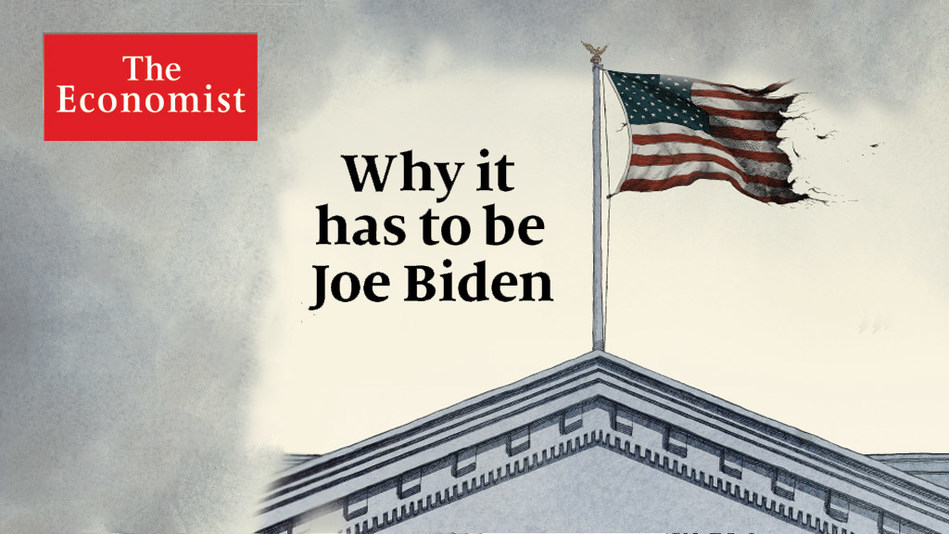 LONDON — The Economist today published its endorsement of Joe Biden for the 2020 United States presidential election.

This is the ninth time The Economist has endorsed a United States presidential candidate, a practice that began in 1980 with a recommendation to vote for Ronald Reagan.

The endorsement will appear online today at https://www.economist.com/US2020endorsement and in the October 31st print edition of The Economist.

The Economist argues that Democrat Joe Biden “is a good man who would restore steadiness and civility to the White House. He would thus begin the long, difficult task of putting a fractured country back together again.”

On Biden’s strengths: “Much of what the left wing of the Democratic Party disliked about him in the primaries—that he is a centrist, an institutionalist, a consensus-builder—makes him an anti-Trump equipped to repair some of the damage of the past four years.”

On the outcome of the election, the editors write: “A resounding Democratic victory would also benefit the Republicans. That is because a close contest would tempt them into divisive, racially polarising tactics, a dead end in a country that is growing more diverse.”

They added on Trump: “The most head-spinning feature of the Trump presidency is his contempt for the truth. All politicians prevaricate, but his administration has given America “alternative facts”. Nothing Mr Trump says can be believed—including his claims that Mr Biden is corrupt.”

The Economist also noted on Trump: “In the past four years he has repeatedly desecrated the values, principles and practices that made America a haven for its own people and a beacon to the world.”

And the editors consider the importance of the vote: “In this election America faces a fateful choice. At stake is the nature of its democracy. One path leads to a fractious, personalised rule, dominated by a head of state who scorns decency and truth. The other leads to something better—something truer to what this newspaper sees as the values that originally made America an inspiration around the world.

In his first term, Mr Trump has been a destructive president. He would start his second affirmed in all his worst instincts. Mr Biden is his antithesis.

Were he to be elected, success would not be guaranteed—how could it be? But he would enter the White House with the promise of the most precious gift that democracies can bestow: renewal.”

The Economist’s US election coverage

The Economist has launched a dedicated US 2020 elections hub as a guide to US politics, and in June The Economist added its first-ever presidential election forecast model. It estimates Joe Biden and Donald Trump’s probabilities of winning each state, the electoral college and the popular vote and is updated daily. It was the first model to be published in 2020 by a prominent news organisation.

In January The Economist launched “Checks and Balance” newsletter and podcast. Distributed each Friday, the newsletter highlights the best of The Economist’s election coverage across all its digital platforms. The “Checks and Balance” podcast is hosted by three Economist journalists, who are joined by a cast of Economist correspondents from around the world. Each week they dig into an important theme shaping American politics. “Checks and Balance” has had more than 10 million listens since its launch. Due to overwhelming success, the podcast will continue as a permanent podcast after the election pivoting to analysis of the next president and the White House.

With a growing global audience and a reputation for insightful analysis and perspective on every aspect of world events, The Economist is one of the most widely recognised and well-read current affairs publications in the world. In addition to the weekly print and digital editions and website, The Economist publishes Espresso, a daily news app, Global Business Review, a bilingual English-Chinese product and Economist VR, a virtual-reality app. Economist Radio produces several podcasts a week and Economist Films produces short- and long-form video. The Economist maintains robust social communities on Facebook, Twitter, LinkedIn, Medium and other social networks. A recipient of many editorial and marketing awards, The Economist was named the most trusted news source by the 2017 Trusting News Project Report.