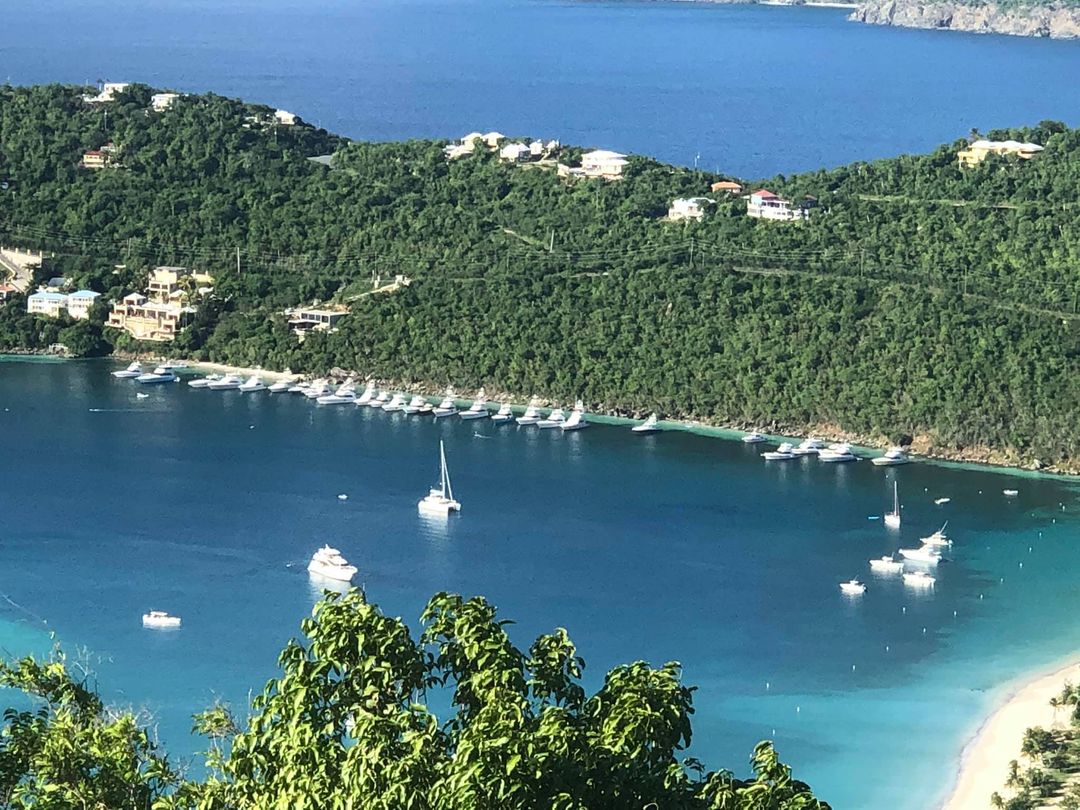 CHARLOTTE AMALIE — Yachts apparently anchored too closely together on St. Thomas earned the ire of several concerned citizens on social media this weekend.

Ronnie Lockhart of St. Thomas posted a photo to Facebook which depicts a large grouping of boats near Magens Bay.

Concerned citizens complained because they felt marine regulations were not being properly enforced by federal or local officials over the Columbus holiday weekend.

“Looks like DPNR was successful in letting them know to distance,” Lockhart wrote. “Lots of complaints though. Since the BVI won’t allow them there, they’re coming here. Actually they used to years ago, mostly in St John, when I believe the BVI enticed them over there.”

Lockhart said DPNR arrived on Saturday and forced the yachts to separate.

“There are tons of Federal Laws controlling the sanitary systems on yachts,” George Grigg said. “The V.I. used to have an environmental department (until they were found smuggling drugs); marine police, and definitively the US Coast Gard has jurisdiction to enforce maritime law and environmental law. This area is also controlled by the MB Authority, go talk to them. I know you’re not going to make friends with the bars and food service people on the beach.”

Some other notable comments on social media included:

“Magens bay is not a marina its a beach, our beach,” Kenneth Moolenaar, Jr. said. “They need to find somewhere else to dock their boats. I have seen this in Florida and some of the beaches smell like a sewage plant, so you all can keep playing around until its too late.”

“Brigitte Berry there has to be some kind of EPA ruling to prevent this docking or anchoring of boats,” Maggie Frair said. “Magens is NOT a marina. Seems like the water could get pretty nasty. It’s such a beautiful beach and bay!”

“Actually these are just good people enjoying a long weekend in the VI,” John Hawkins said. “Try going down there and just talking to them.”

“John Hawkins they are worthy,” Leslie McMillan Garrettson said. “They don’t respect the neighborhood. They are loud.”

“A proper mooring field with fees. Proper noise regulations. A business opportunity for someone to collect waste… and whatever else we can do to make them feel welcome,” Enrique Rodriguez said. “We need to steal them back from the BVI, permanently. Think positive.”

“The people that own those yachts are the one percent of Puerto Rico,” Marc Christian said. “What a lost opportunity to bring the wealthy Puerto Rican Navy back to our shores. What they spent in the fuel burn alone to get to Magen’s would’ve paid for government salaries that day. The problem here is that our leaders talk the same crap for decades and produce nothing. How much blather have we heard about our ‘marine industry?’ We live in the U.S. VIRGIN ISLANDS. We lost our marine industry to the BVI decades ago. We have the legal protections, beauty and shore infrastructure that should make visits like this to our islands attractive. Why are we still discussing inadequate moorings, the lack of rules, amenities and a fee structure for guests and proper management of our natural resources? We cannot be serious. Virgin Islands nice, so gracias, our gold-Rolex wearing amigos, but you gotta go…and don’t come back.”