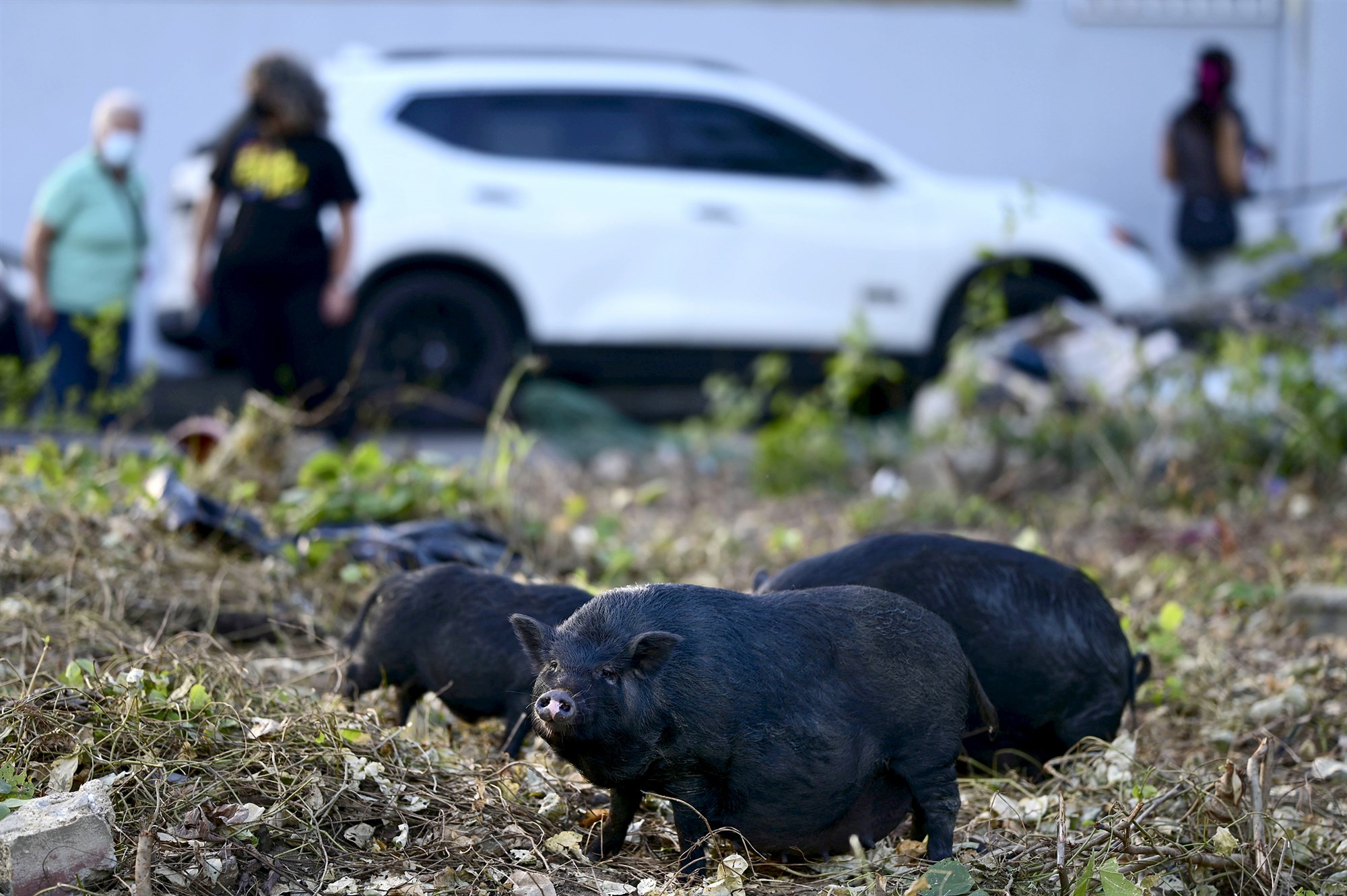 SAN JUAN — Thousands of Vietnamese pot-bellied pigs are snorting and squealing their way across Puerto Rico in what many fear has become an unstoppable quest to eat and reproduce on an island struggling to stop them.

They forage through gardens and farms, knock over trash cans and leave pungent trails of urine and excrement, stopping occasionally to bathe if they find potholes full of rainwater. The former pets — or descendants of former pets — have reproduced at such an alarming rate that the U.S. territory declared a health emergency last year so federal officials could start eradicating them.

It’s the latest non-native species to invade communities in Puerto Rico like iguanas and caimans did before them, although these are proving particularly hard to control and can’t be killed for food because they carry so many diseases.

Crews from Georgia, Alabama and Florida helped remove 500 pigs in four days last August, but the swine are so numerous and scattered that officials had to reconvene and come up with a new plan they launched several weeks ago, said Gustavo Olivieri, Caribbean district assistant supervisor for the U.S. Department of Agriculture’s Animal and Plant Health Inspection Service.

“It was out of control,” he said of the hundreds of pigs concentrated in just one impoverished area in Puerto Rico’s capital. “We realized there were way more animals than we anticipated.”

The problem started about five years ago after people began buying the pigs as pets without knowing they would grow to weigh 250 pounds or more. Olivieri said the pigs multiplied after Hurricane Maria struck in September 2017 as a powerful Category 4 storm because some escaped their confinement while others were set free by their families.

While there are no official numbers, Olivieri said he estimates there are now thousands of pigs roaming across Puerto Rico, with 67 of the island’s 78 municipalities reporting sightings.

He said that while feral hogs are a problem in the U.S. mainland, it is nowhere near the level of what’s happening with the Vietnamese pot-bellied pigs in Puerto Rico. There are no species of pigs native to the island, whose signature dish is arguably lechón asado, or roast pig, thanks to the Spaniards introducing the species in the early 1500s.

On a recent afternoon, pigs of all sizes rummaged through piles of garbage and mingled with roosters and dogs in Cantera, a neighborhood in the capital of San Juan that has long been neglected by the government. Broken glass clinked beneath the tiny hooves of baby pigs as they scurried about while sows stood their ground as nearby drivers slowed down, some smiling.

Community leaders said they understood the attraction that some people feel toward the pigs: “When they’re small, they look real cute,” said 31-year-old Valerie Figueroa, adding that some Puerto Ricans who live near the pigs use social media to give the littles ones away as pets.

So it’s a struggle to make people understand how much trouble they cause, she said as she opened a brochure that she created and printed herself titled, “Problems with garbage? Problems with pigs? If you answered Yes, this document is for you.”

Inside the brochure are pictures of a makeshift corral that fed-up neighbors have built to fence in the pigs and prevent them from entering their community. To residents who insist on feeding the pigs despite being told they’re extremely smart and will return to the same place for food, Figueroa encourages them to drop the leftovers off at the corral.

The problem goes beyond the smell and knocked-over garbage cans. Figueroa said her aunt tripped when one pig chased her and then bit her on the knee, which required surgery. Another neighbor, 52-year-old Jesús Laracuente, said they’ve invaded his garden, where he once grew pigeon peas, taro roots, tomatoes, pumpkins and coriander.