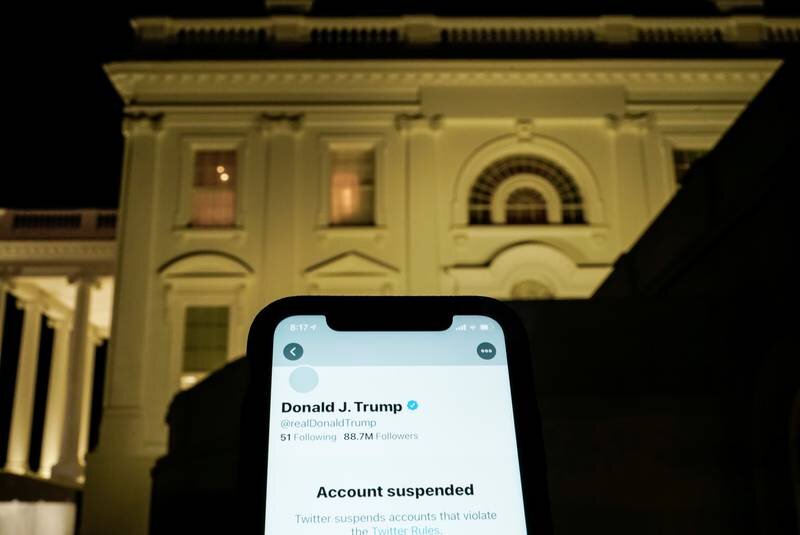 SAN FRANCISCO — Shares of Twitter Inc slumped seven percent today on course to knock off about $2.5 billion from the market value of the microblogging platform after it permanently suspended the account of U.S. President Donald Trump.

The slide came as some Republicans hit out over the weekend at the platform for gagging one of its most watched participants, with traders also pointing to signs that the affair was further fuelling calls for greater regulation of Big Tech.

Trump’s account had at least 88 million followers and had been retweeted billions of times.

“Trump has a very high and loyal following and a lot of those eyeballs will go away if Trump is permanently restricted from posting,” said Andrea Cicione, head of strategy at brokerage TS Lombard.

Other social media platforms, including Facebook Inc, have been quick to issue similar bans on the outgoing president last week after the violence at Capitol Hill.

But the fall in Twitter’s shares in premarket trading was much heavier than for any of its peers.

Twitter said on Friday Trump’s suspension was due to the risk of further violence, following the storming of the U.S. Capitol last Wednesday.

It was the first time the company had banned a head of state and was accompanied by the suspension of accounts belonging to vitriolic Trump fans.

European Union Commissioner Thierry Breton said the events at the Capitol were likely to herald an era of tougher social media regulation, comparing it to the global crackdown on terrorism after the attacks of Sept. 11, 2001.

“The fact that a CEO can pull the plug on POTUS’s loudspeaker without any checks and balances is perplexing,” he wrote in a column for Politico.

“It is not only confirmation of the power of these platforms, but it also displays deep weaknesses in the way our society is organized in the digital space.”

Twitter, Facebook and Google have faced a surge in the cost of moderating content on their platforms in recent years, so far countered by rises in the revenue they get from advertising and other services.

U.S. President-elect Joe Biden has been quoted as criticising the “overwhelming arrogance” of the sector’s leaders and analysts expect more legal moves to counter the power of Facebook and others over the next four years.

“Incremental moderation may be welcome, but it’s not cheap and could benefit Facebook, which already employs a moderation army (around six times) larger than Twitter’s workforce,” Bernstein analysts wrote in a note.

EVEN THE GERMAN CHANCELLOR THINKS IT’S A PROBLEM

Asked about Twitter’s decision, Merkel’s spokesman, Steffen Seibert, said the operators of social media platforms “bear great responsibility for political communication not being poisoned by hatred, by lies and by incitement to violence.”

He said it’s right not to “stand back” when such content is posted, for example by flagging it.

But Seibert also said that the freedom of opinion is a fundamental right of “elementary significance.”

“This fundamental right can be intervened in, but according to the law and within the framework defined by legislators — not according to a decision by the management of social media platforms,” he told reporters in Berlin. “Seen from this angle, the chancellor considers it problematic that the accounts of the U.S. president have now been permanently blocked.”

Merkel herself does not have a Twitter account, although Seibert does and many German government ministers do.

Reporting by Ambar Warrick and Sruthi Shankar in Bengaluru and Thyagaraju Adinarayan and Julien Ponthus in London; Editing by Rachel Armstrong, Kirsten Donovan and Arun Koyyur