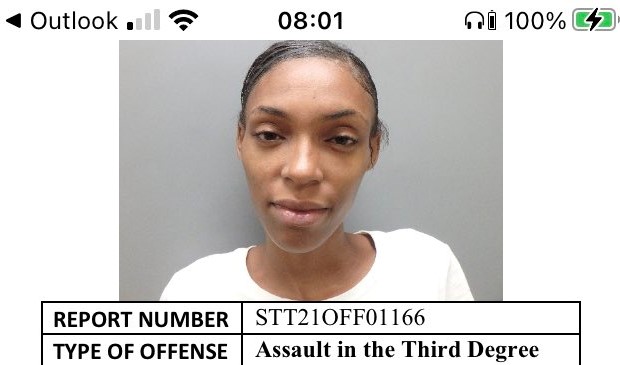 CHARLOTTE AMALIE — A St. Thomas man told police he was cornered by two people in the community center of a housing project, tasered, beaten and threatened with a knife Friday evening resulting in the arrest of one woman the next day. His car was also damaged during the incident.

The injured man said Katina and 19-year-old Raquan Penn cornered him at Oswald Harris Court then proceeded to assault him and cause damaged to his vehicle sometime before 6:15 p.m. Friday, according to the VIPD.

“The victim also stated that Ms. Evans had a silver kitchen knife in her hand, in which she tried to stab him with same,” the VIPD official synopsis said. “The victim went on to state that he was also tased by Ms. Evans with a taser during the physical altercation.”

Bail for Evans was set at $25,000. Unable to post bail, she was remanded to the custody of the Virgin Islands Bureau of Corrections pending an advice-of-rights hearing.

Meanwhile, the comments on social media came fast and furious in regards to this incident.

“It have too [sic] be a reason why they both beat he scunt,” Hanoi Francis said from St. Thomas on Facebook.

“Interesting that women assault men and we can examine the situation and see what pushed these women to this point,” Patrick Mell said. “But if we examine any situation that a man assaults a woman and we are supporting abuse?? Smells like a double standard to me. Of course women have understandable reasons for committing assault and men don’t.”

“I wonder what he did for these women?” Trabert Graneau said on St. Thomas.

“Two woman is wats [sic] getting me lol who the other woman is?” Tasha Chinnery Williams said. “Smh even the news gets shit wrong.”

“You go girls! Too many men treat women like second-class citizens…but expect women to cater to them,” Becky Tate said. “As Bob Marley says, ‘Stand Up for your Rights.'”

“They fuckin right it had to be some shit that took place,” Zita Jeffers said. And this is the aftermath of it!! It’s sad but obviously it got the best of them. As for those who speak of (a) double standard women have been raking abuse from men for year and vice versa, but if they don’t reach out for help, no one knows their pain. Some men are weak and don’t know how to walk away. Some for some women. But if it comes to this it had to be really deep.”

“Valentine week love (is) in (the) air,” Elif Castillo said.

The news of Evans’ arrested was posted by the VIPD to Twiiter at 8:03 a.m. today.