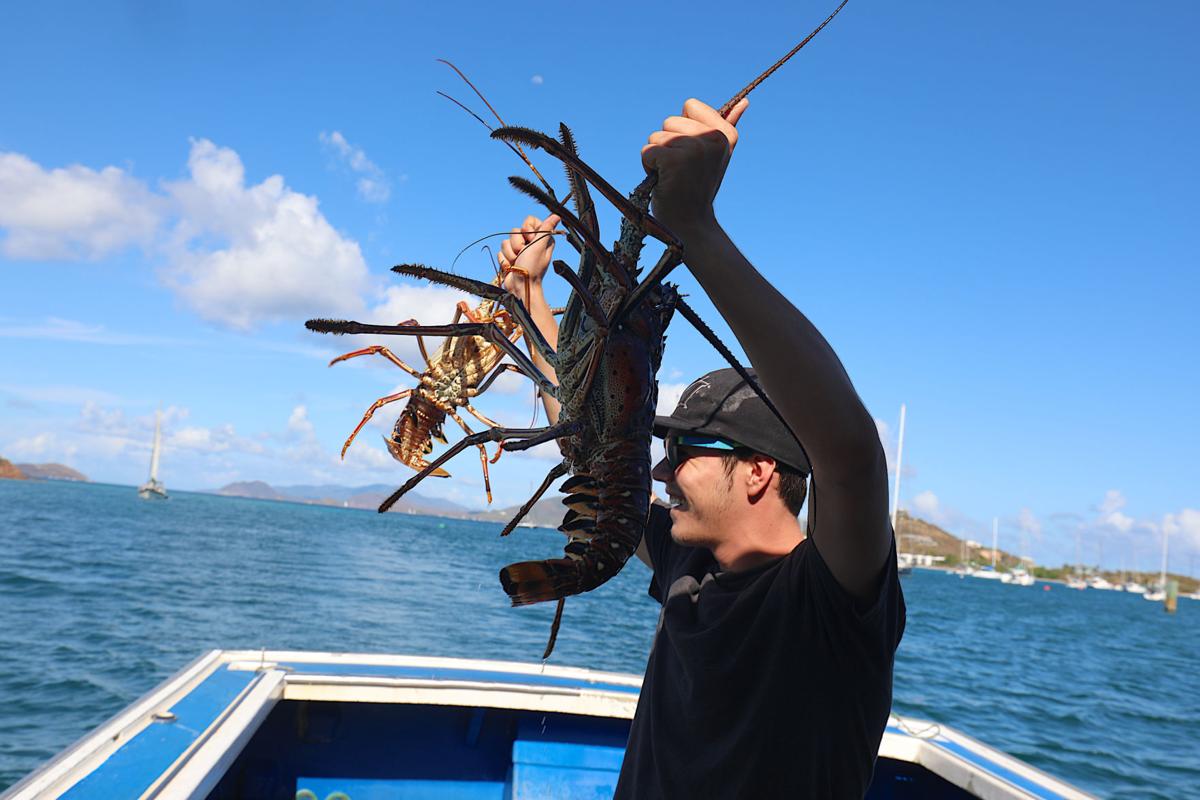 CHARLOTTE AMALIE — When Winston Ledee saw a Coast Guard vessel heading toward his boat at 6:30 in the morning, the lobsterman didn’t think twice until it was on top of him, and he dove into the water the instant before it plowed through his boat and continued on its way.

That’s how in 2014 Ledee got “Let Her Go,” a 45-foot trawler built in Prince Edward Island, Nova Scotia.

When he says lobster fishing is one of the most dangerous occupations in the world, he has experience — 30 years of it to back it up.

Let Her Go is oversized for Frenchtown’s small harbor, so Ledee bases her in Red Hook, where his day begins in darkness. Rising at 3 a.m., he packs hard-boiled eggs for breakfast, curried chicken for lunch and a cooler of drinks for himself and his mate, 19-year-old Kyle LaPlace.

Lobsters and fish support him and his brother Gregory, who co-owns the business, as well as the men who crew with him, build the fish traps, survey and repair the boat and provide dock space. It’s a complete microeconomy.

“Fishing has been good to me,” Ledee says.

The twinkle of shore lights recede as Let Her Go pulls away in a light southeast wind. Ledee is playing catch-up after a week of high winds and swells that kept him mostly on shore.

Although of different generations, captain and mate hail from ancestors who came to St. Barths by way of France in the 1700s. Ledee’s grandparents migrated to St. Thomas for work. In the day when cows were plentiful, his father worked for St. Thomas Dairies and raised his own cows, pigs and goats on the family’s North Side farm. Ledee was that skinny teenager who could shimmy up a palm tree and harvest the coconuts. Although he marks himself “Caucasian” on government forms, he identifies with his island.

“My ass is white but I’m a Caribbean man of French descent,” he says.

Ledee, at 64, has seen a lifetime’s worth of maritime changes. From a position at the helm in the wheelhouse, he pores over a dashboard lit with the LCD screens of radar, chart plotter and depth finder systems that guide him to his buoys, instead of the paper charts and land coordinates he used in the past.

Global positioning was just coming on the scene when he started fishing commercially in the early 1990s. While his colleagues were still plotting coordinates by hand and eye to find their buoys, he was among the first to buy a small GPS device.

“While they were still searching, I was going straight to it,” he laughs.

Although he’s constantly tuned to several weather stations, the reports may change from 3-foot to 5-foot to 8-foot swells minute to minute. He goes out three days a week in every condition except when winds and swells are both high, bringing waves crashing over the boat.

Dawn breaks and LaPlace rouses from a wheelhouse berth to pull the first traps. The boat comes alongside the first buoy with Ledee’s identifying colors: black, white and gray.

LaPlace lifts it with a boat hook while Ledee attaches the rope to an electric winch that pulls up the first trap with a high-pitched whine. Rope ties the traps to one another and to the buoy that marks them, and runs so swiftly that it can easily tangle and harm a fisherman — even fatally — if not constantly tended, Ledee says.

The catch is removed, the old bait tossed and fresh bait inserted, trap after trap — the brothers have about 300 lobster and 100 fish traps — until the stern is full with them. Then one by one they’re returned to the sea until, a week later, Ledee pulls and checks again.

The sun explodes above the horizon, and Ledee pauses to snap a picture on his smartphone — a morning ritual.

For the rest of the day, the two men will run from buoy to buoy, repeating this process in a continuous rhythm. Frigate birds, called weather birds by the fishermen, hover above as LaPlace baits the traps with cow hide or herring. Reef sharks prowl for discards. One zithers behind a trailing buoy on the chance that something moving in the water means a meal.

As the light changes from yellow to blue to gun-metal gray with a scudding cloud, the mood on the boat changes, too.

Ledee lets out a cowboy yell whenever a trap comes up bristling with spiny lobsters. When it come up empty, silence descends.

Lobsters like to live in sea grass, and the catch has been a little off since the hurricanes of 2017, he suspects because the grass is still growing back.

Then, too, although a moratorium on fishing licenses protects the fishery from being depleted, he has watched from his boat as mud, heat and pollution have taken their toll on lee shore coral reefs, a nursery for fish. Sometimes after heavy rains, the runoff is so strong that he can hardly hold his rope because it’s so slippery with mud, he says.

“You have to see it to believe it. Mud runs down from the shore, the swells lift it and carry it out,” he says.

That constant play of gravel and mud keeps lobsters moving, and it’s a constant educated guess where they’ll go.

His brother is on shore now with orders from The Ritz-Carlton, Duffy’s Love Shack, The Greenhouse, Amalia’s Café, Easterly and Outriggers, but “it depends on what we catch or if we catch anything,” LeDee says.

They won’t actually know how they’ve done until the catch is weighed and counted. So much depends on the action of the swells on the ocean floor.

Cruise ship vacations have taken the lobsterman to most of the Caribbean islands where his first move is to hail a taxi to the nearest fish market to see what the locals are catching and how. Other islands, he observes, especially Puerto Rico, give their fishermen a dock, fish houses all over the island and a place to keep their boats, widening their operating margins.

The first portion of Ledee’s catch must cover many of those costs, which, in the Virgin Islands, are expensive. If his traps don’t produce, he relocates them.

How does he know where to put them next?

“I know by my experience, because I’ve been doing it for so long,” he says.

The afternoon sky burns blue as Let Her Go powers into the lee of a North Side island were Ledee and LaPlace give the boat a rinse-down with seawater. The mood is upbeat as Ledee peers into the hold and sizes up the haul.

Vacationers teem on the sidewalk outside American Yacht Harbor as they dock stern-to, and LaPlace bags the lobsters and weighs them on the scale.