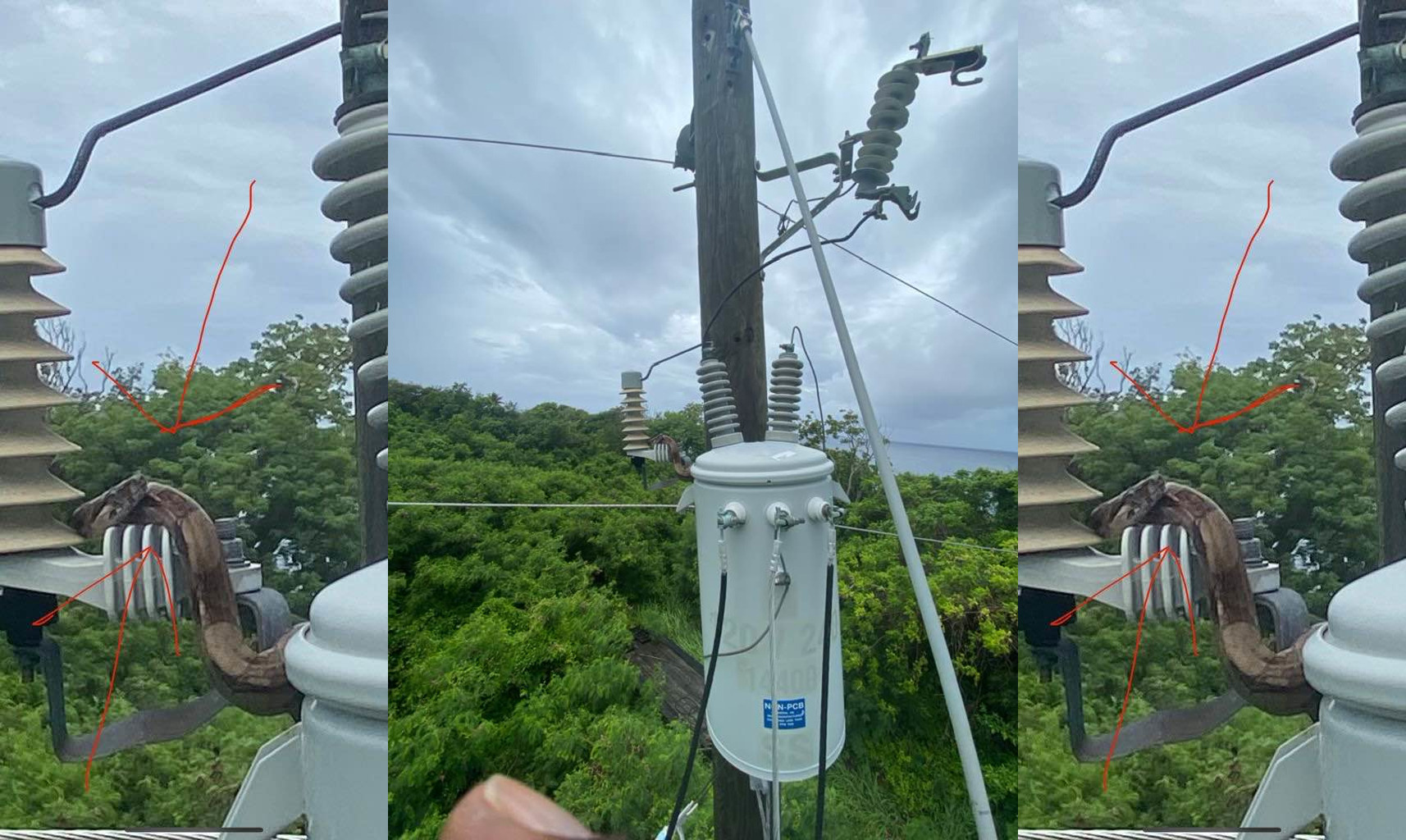 CHRISTIANSTED —  A slithering snake caused a power outage on St. Croix Sunday morning, according to eyewitnesses.

At about 6 a.m., a red tail boa constrictor wriggled to the top of the Virgin Islands Water and Power Authority (WAPA) transmission power lines in an area just outside of Kingshill.

The snakes’s contact with power lines caused a fault that resulted in localized neighborhood power outages on St. Croix.

Joseph Dubery of Christiansted posted these photos Sunday morning of the brown snake poised to gobble up a bird when it alights on to a WAPA power line.

“Say less St. Croix WAPA get cut off today cause by snake not rain another one WTF thanks again PJ and all the linemen that keep us together,” Dubery said. “WAPA man be careful my boy.”

Power lines can be extremely dangerous to snakes and other animals. The Virgin Islands Free Press cares about protecting snakes from electrical lines and we encourage you to call WAPA at (340) 773-2250 and ask the to erect physical guards to discourage snakes from crawling onto your utility poles and power lines.

Meanwhile, the reaction to the serpentine news of St. Croix was predominately anti-snake.

“What the heck is going on I thought they were vanishing out of St Croix. Chupps,” Glenice Marsh said.

“What the snake eating? It fat so till. Why so much snake?” Vida Herbert said.

“So why that one is not chopped up? What is wrong with the people of St. Croix? Taking pictures proving what until it swallow someone?” Aura Williams said.

“You go chop it up these snakes are real scary,” Joseph Dubery replied to Aura Williams.

“The WAPA guy was scared, too,” Aura Williams replied to Joseph Dubery.

“Is this one too not on St. Croix? The governor said the last one shown wrapped around the (deer emoji) was not on this Island,” Rashida Mohamed said.

“This snake gotta be sluxcing (sic) down by the governor favorite spot Rossie’s!” Donovan Leona said.

Electrical lines present a significant risk of electrocution to snakes and other animals that crawl, hang, or climb on them. One common scenario that often leads to snakes’ presence on power lines is their search for food.

Birds are a significant food source for many snake species, and it is common for snakes to slither onto electrical lines in pursuit of birds perched on the lines.

Snakes can easily access power lines from the ground through poles or by crawling onto the lines from other high places. Not only does this present a high level of risk for injury to snakes, it is also an easy way to cause a power outage.

Last August, 22,000 people in Jacksonville, Florida, were left without power when a red rat snake crawled into a substation; a snake in Georgia set off a chain reaction when it wiggled into one substation, causing a parallel outage at another; and a snake in Colorado knocked out power to 6,500 customers in four towns,