SAN JUAN — A Coast Guard Boat Station San Juan crew rescued two men Tuesday and recovered the body one other from the water, after they were dragged by the strong currents just off a Condado beach in Puerto Rico.

The two survivors were Good Samaritans, one a local surfer and the other a friend of the deceased, who went into the water with body boards to assist the man in distress, unfortunately the man was recovered unresponsive and later pronounced dead.

“Our most heartfelt condolences go out to the family and friends of this young man,” said Lt. Cmdr. Nestor Lazu-Rivas, Sector San Juan Command Center supervisor. “We are sorry for their loss and pray they find strength during this most difficult time.  These past weeks, the sea states have been quite active around island beaches; there are warnings of dangerous strong currents and riptides, especially in Condado, which is well known to be one of the most dangerous beach areas.  We advise beachgoers to heed these warnings and signs posted on these beaches, it could save their life.”

The Station San Juan crew transported the survivors along with the man’s body to the Coast Guard Base in San Juan, where awaiting local authorities and Emergency Medical Service personnel provided assistance.

In the past 12 months, Coast Guard air and surface units have responded to over 21 cases of 39 persons in the water in distress in the Condado and Ocean Park beach area. The Coast Guard, local authorities and Good Samaritans have rescued or assisted over 31 lives, while at least eight people were reported deceased. 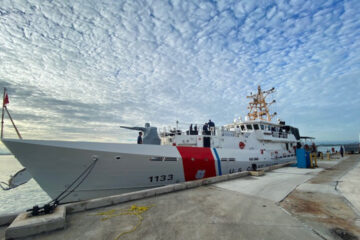