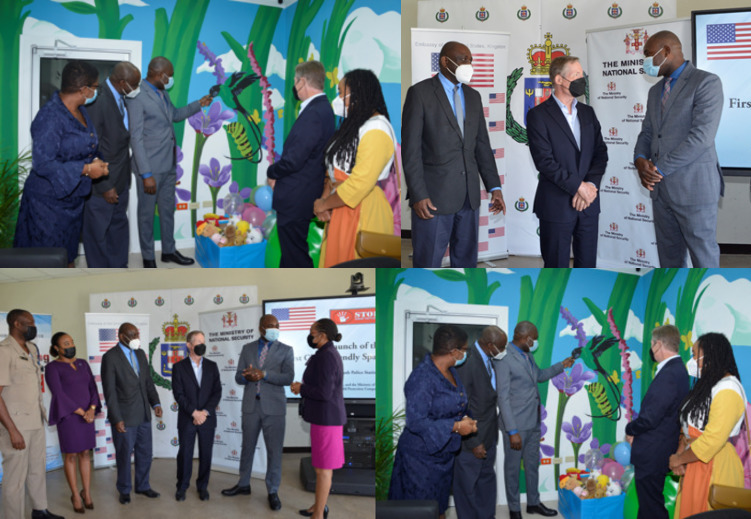 KINGSTON —The Embassy of the United States of America in Kingston and the Ministry of National Security jointly launched Jamaica’s first ever child-friendly space to assist child victims of human trafficking and other serious crimes.

This safe space, based out of the Falmouth Police Station in Jamaica’s Trelawny Parish, is specifically designed with children in mind and serves as a first stop for child victims, who are examined, interviewed, and referred for appropriate care and services.

A beautiful mural by artist Monique Kidd welcomes visitors with a colorful depiction of Jamaica’s wildlife and the state-of-the-art facility has a child-friendly office area, medical examination facilities, and interview room.

Today’s launch of the child-friendly space is a tangible result of government commitments under the United States-Jamaica Child Protection Compact (CPC) Partnership.  Signed in May 2018, the CPC outlines a multi-year plan developed jointly by both governments to build on Jamaica’s existing efforts to prosecute and punish perpetrators of child trafficking, identify child trafficking victims, strengthen the provision of comprehensive protective services, and prevent child trafficking from occurring.

This is the first CPC Partnership in the Caribbean and includes an investment of nearly $6.7 million in U.S. foreign assistance from the U.S. Department of State’s Trafficking in Persons Office.  For their part, Jamaican ministries, departments, and agencies have invested significant resources and personnel toward the goals and objectives of the CPC Partnership.

As part of the U.S.-Jamaica CPC, the Warnath Group, the Centre for the Investigation of Sexual Offences and Child Abuse (CISOCA), and other anti-trafficking stakeholders support the Government of Jamaica and will continue to work diligently to add several more planned spaces for child victims across Jamaica.  The Warnath Group, working closely with CISOCA officers, also provided trainings, tools, and skills needed for investigators to best use the space while supporting child victims.

U.S. Embassy Kingston’s Counselor for Political and Economic Affairs Alex Sokoloff said “Today’s opening of Jamaica’s first child-friendly space is a testament to our two governments’ continued dedication to combat child trafficking. The space itself is the culmination of two years of work by a multitude of stakeholders under the U.S.-Jamaica CPC Partnership.  The space will endure as a long-standing resource for the community to help support children who are victims of human trafficking and other serious crimes, so that they can feel heard and receive justice.  Our hope is that this success can be replicated in different parts of the country, reaching a greater number of children in need.”

Additional remarks were provided by Permanent Secretary Courtney Williams, the chair of National Task Force Against Trafficking in Persons, as well as leadership from the Jamaica Constabulary Force and CISOCA.

“The Government of Jamaica is committed to effectively investigating, prosecuting, and convicting human traffickers while providing comprehensive trauma-informed care for child victims,” Zavia Mayne, Minister of State, Ministry of National Security, said. “The launch of the child-friendly space is an opportunity for the Government and its partners to renew our commitment to work together to protect victims of trafficking and to condemn with one voice the abhorrent practice of trafficking in human beings. We are grateful for the Child Protection Compact (CPC) partnership and extend thanks to the U.S. Department of State and the Warnath Group for their contribution to this partnership and its dedication to minimizing human trafficking in Jamaica.”